Ranji roundup: Punjab bundle out Delhi for 107 on Day 1 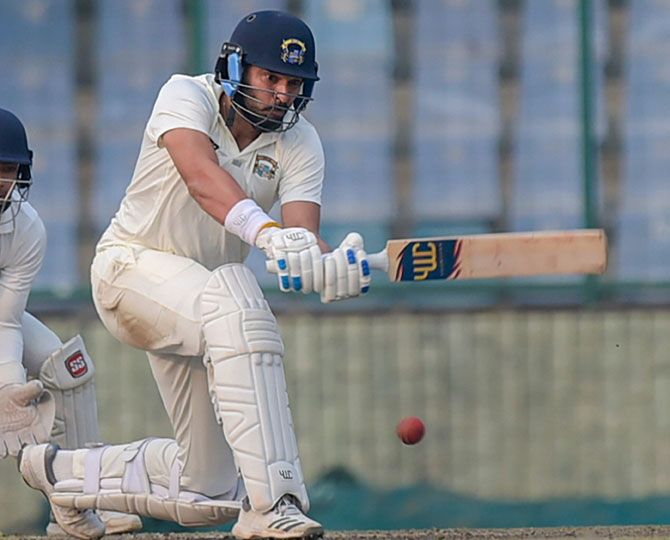 Punjab seamer Siddarth Kaul returned with an impressive six-wicket haul to dismiss Delhi for 107 in their first innings on the opening day of the Ranji Trophy Group B match on Wednesday.

Delhi captain Nitish Rana's decision to bat first backfired with their batting line-up, including former India batsman Gautam Gambhir (1), failing to put up a fight against some quality bowling at the Feroz Shah Kotla stadium.

More than half the side failed to reach double-digit figures with K Bidhuri (27) emerging as Delhi's highest scorer.

Punjab then took a first inning lead of 29 runs after reaching 136 for 3 with skipper Mandeep Singh (54 not out) producing an unbeaten fifty and opener Jiwanjot Singh (39) and Anmolpreet Singh (22) also chipping in with useful contributions.

At stumps, veteran batsman Yuvraj Singh (16 not out) was giving Mandeep company at the crease.

Mumbai: All-rounder Shivam Dubey struck a brisk 110 as Mumbai fought back to post a modest 297 against Gujarat on the opening day of their Elite Group A Ranji Trophy match.

Dubey, who got a life on 14, made most of it to bring up his second first-class hundred at the Wankhede Stadium on Wednesday.

The left-handed batsman was dropped by Rujal Bhatt in the slips and he did not look back after that. Dubey had hit his maiden first-class hundred against Railways in New Delhi.

In his 128-ball knock, Dubey struck eight fours and six towering sixes as he bailed Mumbai out of trouble after the hosts were teetering at 74 for five.

Dubey first joined hands with Siddesh Lad (62) and then captain Dhawal Kulkarni (23). He forged a 74-run sixth wicket stand with Lad and added 84 runs for the seventh wicket with Kulkarni.

Earlier, put into bat on a greenish wicket, Mumbai had a disastrous start as they lost both their openers Akhil Herwadkar (0) and Jay Bista (8) cheaply.

Then experienced Surya Kumar Yadav (40) and Lad rallied the innings with a 53-run stand for the third wicket. But Yadav threw his wicket away soon, with Mumbai in a spot of bother at 74-3.

Then Armaan Jaffer, who made a comeback to the Ranji team, got a reality check as the youngster along with the experienced Aditya Tare both fell without scoring as Mumbai slumped to 74-5.

However, after that Dubey build the innings.

After Dubey fell to Piyush Chawla, debutant Dhurmil Matkar made a valiant 47 in 53 balls to take Mumbai near the 300-run mark.

For Gujarat, left-arm medium pacer Arzan Nagwaswalla was the pick of bowlers as he returned with figures of 5-78. He was supported by Rush Kalaria (3-80) and Piyush Chawla (1-53).

At Raipur: Chhattisgarh 188 for six (Harpreet Singh Bhatia 63, Manoj Singh 41 not out; Aditya Thakare 3-41) vs Vidarbha.

Chennai: A fighting knock of 81 not out by Baba Aparajith and a half-century by M Kaushik Gandhi helped Tamil Nadu post 218 for seven on the opening day against Bengal in the Ranji Trophy Elite Group B match.

Electing to bat, the home team got off to a slow start with openers Gandhi and Abhinav Mukund negotiating the Bengal new ball attack cautiously.

However, Mukund fell for nine to a catch by Kousik Ghosh off Ishan Porel's bowling.

However, the dismissals of Gandhi (51) and captain B Indrajith (0) in quick succession set the hosts back before Jagadeesan and Aparajith put on a half-century partnership to steady the ship.

Aparajith held firm even as wickets fell around him to see the day through.

The talented young Porel was the best bowler for Bengal with three wickets.