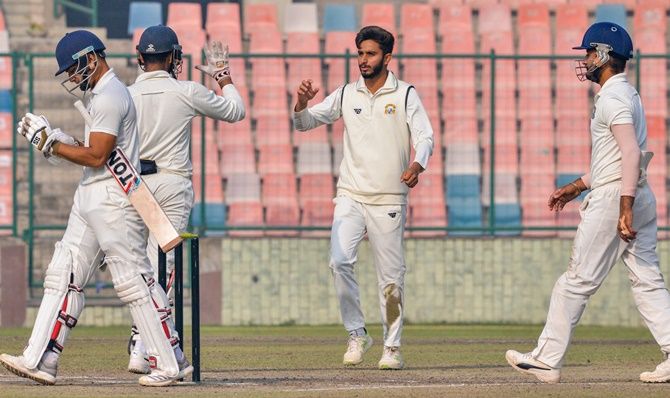 Punjab pummelled Delhi by 10 wickets for their maiden win of the season on Friday while handing the hosts their first Ranji Trophy loss at home in five years.

With Punjab controlling the game from day one, it was only a matter of time before they scored an outright win, fetching seven points.

Delhi, who were gasping at 106 for six in their second innings and trailing Punjab by 69 runs at stumps on day two, ended up with 179 courtesy Pulkit Narang (31) and Pulkit Sood (25).

Punjab needed just five runs for a big win and and they knocked it off in 2.1 overs with Jiwanjot Sharma and Abhishek Sharma in the middle.

With the emphatic win, Punjab have revived their Ranji campaign after having collected just two points from the previous two games.

On the other hand, Delhi's troubles have increased with their first loss of the season. They had conceded the first-innings lead against Hyderabad and could not dismiss Himachal Pradesh in their opener for an outright win.

Delhi's batting let them down again though they did a tad better than the first innings, in which they were bundled out for 107.

In the first innings, they surrendered to Punjab's Siddharth Kaul while in the second, they were done in by spinners Vinay Choudhary and Mayank Markande.

Punjab had made 282 in the first innings, thanks to a captain's knock by Mandeep Singh (90).

Yuvraj Singh, playing his first game of the season, made 24 off 88 balls. Hosts Mumbai eked out a crucial 16-run first innings lead after they bundled out Gujarat for 281 in their Elite Group A Ranji Trophy game in Mumbai.

Mumbai had posted 297 in their first innings at the Wankhede Stadium.

Gujarat resumed the penultimate day of the four-day match on 232/8 with wicket-keeper Dhurv Raval unbeaten on 60.

Raval added 39 runs to his tally, but missed out on a deserving hundred after he fell on 99 and was the last man to be dismissed.

Raval briefly raised hopes of the visitors taking the first innings lead, but it all ended when he was caught by wicket-keeper Aditya Tare off Shivam Dubey.

However, Mumbai had a disastrous start in their second essay as Gujarat bowlers lead by medium pacer Chintan Gaja (4-50) wreaked havoc.

But then Aditya Tare (59) used his experience as he and first innings centurion Shivam Dubey (40 not out) rebuild the innings.

The two pulled Mumbai out of trouble in their 57-run stand before Tare was dismissed.

Dhurmil Matkar (12 not out) was holding the fort along with Dubey as Mumbai ended the day at 157/7, taking their overall lead to 173 runs.

And after that, the visitors reduced the hosts to 28/4 in their second innings and in all probability go for a win on the final day on Saturday.

At Rajkot, Baroda opener Kedar Devdhar remained unbeaten on 171 as the visitors reached 268/1, but still trailed Saurashtra by a massive 253 runs.

There will be a close fight between the two sides for taking the first-innings lead.

At Mysuru, hosts Karnataka need another 130 runs to register outright victory against Maharashtra and have all 10 wickets in hand.

Rajasthan secured a crucial first innings lead against Uttar Pradesh after bundling out the hosts for 214 in their Elite Group C match in Kanpur.

The visitors rode on splendid performance by left-arm pacer Aniket Choudhary (5-64) at the Green Park Stadium after posting 311 in their first essay.

Thus, the visitors took 97-run first-innings lead and then extended it to 233 runs as they ended the penultimate day of the four-day game at 136/4.

For Uttar Pradesh, only wicket-keeper Upendra Singh showed some resistance with a valiant knock of 67, But he was devoid of partners.

Rajasthan have won all their three games so far and would be hoping to record their fourth successive victory when they take the field on Saturday.

In the second innings, Rajasthan opener Amitkumar Gautam continued his good form as he remained unbeaten on 66 at close of play.

Gautam had missed a century by just seven runs in the first innings.

Meanwhile at Guwahati, Assam thrashed Haryana by an innings and 35 runs as Arup Das and Mukhtair Hussain picked four wickets each in the second innings to bowl out the visitors for 178.

At Cuttack, Odisha need another 104 runs for an outright victory against Tripura, but have only five wickets in hand.

At Palam in New Delhi, Services are on the brink of a win against Jammu and Kashmir as they require another 38 runs with five wickets in hand.

Off-spinner Writtick Bijoy Chatterjee Friday bowled Bengal back into contention in the Ranji Trophy Elite Group 'B' match against Tamil Nadu with a five-wicket haul at the M A Chidambaram stadium in Chennai.

Trailing by 74 runs in the first innings, Chatterjee's efforts (5 for 22) helped Bengal dismiss Tamil Nadu for 141 in 62.5 overs, leaving the visitors a target of 216 to secure its first win of the season. Chatterjee removed the first innings centurion Baba Aparajith (21) and N Jagadeesan (38) while fellow spinner Pradipta Pramanik dismissed captain B Indrajith (4).

Some late order resistance by J Kousik (10) and M Mohammed (23 not out) helped the home team stretch the lead.

Bengal began the chase cautiously with left-handed opener Abhishek Kumar Raman, who made 98 in the first knock and Kousik Ghosh (13) seeing off the early threat from T Natarajan and Mohammed. 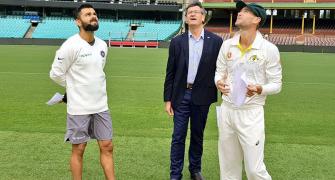 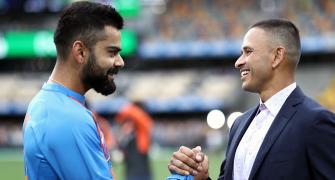 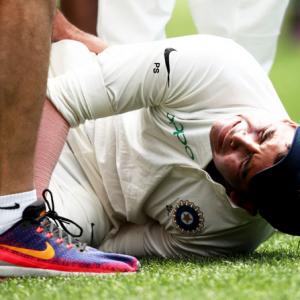