A round-up of Day 1 of the Ranji Trophy matches played on Monday. 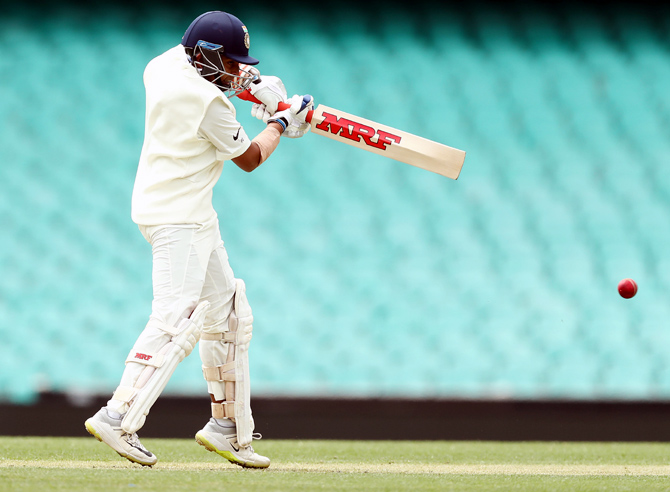 Test specialist Ajinkya Ranahe and young opener Prithvi Shaw struck gritty fifties as Mumbai ended day one of their Ranji Trophy lung opener against Baroda at 362/8 in Vadodara on Monday.

While Rahane's patient 79 off 145 balls pulled Mumbai out of the rubble, bowlers Shardul Thakur (64) and Shams Mulani (56 not out) contributed with the bat slamming half-centuries as they ensured Mumbai ended the first day with a decent score on the board.

This was Shaw's first game in first class cricket after serving a eight-month ban for doping, and he made optimum use of the opportunity.

Shaw, who is eyeing the third opener's slot in Tests, made a quick 66 off 62 balls.

After opting to bat, openers Jay Bista (18) and Shaw conjured a 74-run stand for the first wicket. After Bista fell, all-rounder Shubham Ranjane was promoted up the order at number three, but he fell to convert his start and was dismissed for 36 off 59 balls.

Shaw, who was going all guns blazing, was certainly poised for a bigger score. He smashed 11 fours and one six as he tore into the Baroda attack.

But right-arm pacer Abhimanyu Rajput cut short Shaw's stay and cleaned him up in the 18th over, with Mumbai at 95-2.

Then in walked Rahane, who in the past has rescued India on numerous occasions. The India Test vice-captain first added 57 runs with Ranjane to steady Mumbai's ship. However, Baroda pegged back Mumbai by removing two quick wickets -- Ranjane and skipper Suryakumar Yadav (0), who had a rare failure. Even the experienced Aditya Tare fell cheaply as Mumbai were in a spot of bother 182-5.

Then Rahane, who hammered 10 boundaries, showed his mettle and held one end. He first got support from Akash Parkar (12), and later from Mulani.

After his dismissal, Mulani and Shardul took the game away from Baroda with their half-centuries. Mulani hit seven fours and two sixes in his unbeaten knock, while Thakur smashed 11 fours and a six.

Mulani and Shashank Attarde (5 not out) will resume Mumbai's innings on Tuesday. For Baroda, Bhargav Bhatt grabbed three wickets but gave away 110 runs.

Delhi coach KP Bhaskar's ploy of using four-pronged spin attack backfired badly as Kerala comfortably reached 276 for 3 riding on a patient hundred from Robin Uthappa on the first day of their Ranji Trophy Group A encounter in Thumba, on Monday.

Uthappa, who has endured a slump in form during the past few seasons, scored 102 off 221 balls with seven fours and three sixes, adding 118 runs for the second wicket with opener Ponnam Rahul (97).

Rahul missed his ton by three runs but Uthappa completed his 22nd hundred before being dismissed in the final over of the day by comeback-man Pradeep Sangwan (1/31 in 9.1 overs). In the process, he also added 90 runs for the third wicket with skipper Sachin Baby (36 not out).

On a slow track, Kerala skipper Baby called correctly and his decision to bat was vindicated by the top-order, also aided by poor team selection from the Delhi team management.

With new captain Dhruv Shorey in charge, it is learnt that Bhaskar, who had a controversial exit after the 2017 season, is calling shots and it was his decision to have four spinners -- leg-spinner Tejas Baroka (1/62 in 19 overs), left-arm spinner Vikas Mishra (1/45 in 19 overs), along with the off-spin duo of Shivam Sharma (0/65 in 17 overs) and Lalit Yadav (0/17 in 9 overs) in the playing XI.

A fifth spinner -- part-timer Nitish Rana -- also bowled three overs with pacers Navdeep  Saini (0/48 in 13 overs) and Sangwan only bowling 22.1 overs between them.

In fact, Sangwan, who has last played a first-class match three years back, looked rusty and bowled only two spells.

None of the spinners made an impression even though young Baroka, who made his debut after a consistent show at the Under-19 and Under-23 levels did show some spark.

He got his maiden first-class scalp removing the seasoned Jalaj Saxena (32) caught by Lalit.

However, off-spinner Shivam was a complete disappointment as he bowled a lot of loose deliveries while left-arm spinner Mishra could hardly extract any turn.

Once he got some turn, Mishra was able to dismiss left-handed Rahul but overall could hardly make any impact.

With Kerala looking good for a comprehensive first innings score, poor team selection has already put Delhi on the backfoot.

Half -centuries by in-form batsman Devdutt Padikkal (78) and Pavan Deshpande (65) helped Karnataka reach 259/6 on the opening day of their Elite Group B Ranji Trophy game against Tamil Nadu in Dindigul.

India opener Mayank Agarwal, however, failed to convert his start as he was dismissed on 43 off 78 balls.

For Tamil Nadu, ace off-spinner Ravichandran Ashwin finished the day with figures of 1-68.

Padikkal continued his golden run with the bat, stroking a fluent 78, hitting eight fours in his 182-ball knock, as he put on 67-run stand for the second wicket with Agarwal.

However, the two quick wickets did not deter Padikkal from playing his shots.

He found an able ally in Pawan Deshpande (65) as the duo pulled the side out of the rubble with their 116-run stand.

However, Tamil Nadu rallied removing both Paddikal and Deshpande in quick succession to leave Karnataka teetering at 222-5.

Karnataka all-rounder Shreyas Gopal (35 not out) steadied the ship as the first day's play finished on an even keel.

Opener Shubham Rohilla and middle-order batsman Shivam Chauhan scored centuries as Haryana comfortably reached 279 for three against Maharashtra on the opening day of their Group C opener at the Ranji Trophy, in Rohtak, on Monday.

Rohilla and Chauhan added 221 runs for the third wicket to resurrect Haryana's first innings after they were reduced to 24 for 2 in the 8th over.

Electing to bat, Haryana didn't make a good start as opener Ankit Kumar (14) was sent packing by Samad Fallah in the seventh over, new batsman Chaitanya Bishnoi (1) too quickly walked back to the pavillion when he was dismissed by Anupam Sanklecha in the next over.

Chauhan and Rohilla then took Haryana to 50-mark in 14.4 overs. The duo continued to keep the bowlers at bay and entered the lunck break with Haryana at 127/2 in 33.6 overs.

The duo matched each other with Chauhan completing his half-century in 63 balls, while Rohilla reached the landmark in 93 balls.

Chauhan reached his century off 181 balls, while after the break Rohilla completed his century, amassing 103 runs off 206 balls.