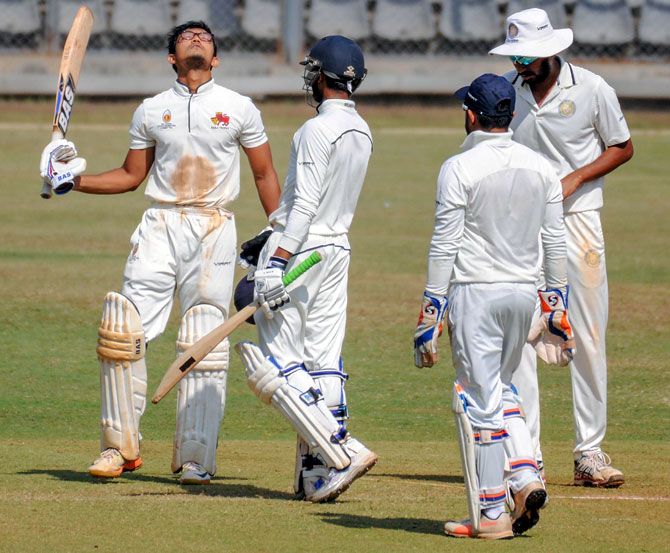 Mumbai opener Jay Bista rediscovered his form with a splendid century to lay a solid foundation with his partner Vikrant Auti before Saurashtra fought back on day one of their Elite Group Ranji Trophy match in Mumbai on Saturday.

Bista slammed 127 off just 150 balls studded with 21 hits to the fence and also put on 174 runs with fellow-opener Auti (57) before the visiting team's bowlers, led by left arm spinner Dharmendrasinh Jadeja (3 for 89), triggered a collapse post lunch taken with the hosts at a commanding 122 for no loss.

The hosts were left reeling at 232 for five before captain Siddesh Lad, with a responsible 84 from 115 balls with 12 fours and a six, and all rounder Shivam Dube (34) stemmed the rot with an unbeaten partnership of 102 for the sixth wicket that helped Mumbai end the day at a healthier-looking 334 for five.

The morning belonged to Bista who raced to his half-century in just 63 balls, striking seven fours off left-arm pacer Chetan Sakariya, and also helped Mumbai record their first century stand of the season for the opening wicket.

He completed his fourth first class hundred in just 116 balls shortly after lunch.

But once Bista fell caught at cover off Jadeja who secured some turn and bounce off the Wankhede Stadium track, the slump followed with Mumbai losing two more wickets in nine balls and with just seven runs added to be reduced to 198 for three.

Jadeja added the wicket of Shreyas Iyer, who had cracked a blazing hundred in the previous game against Baroda a day after returning from New Zealand, while Auti fell to rival skipper Jaydev Unadkat.

Shubham Ranjane too departed not too much later as Mumbai lost four wickets for 37 runs in the second session before adjourning for tea at 222 for four.

Soon after tea, Aditya Tare was dismissed by Jadeja for his third wicket at 232 before Lad, playing his now familiar anchoring role , was joined by Dube and the two repaired the rocking boat with a partnership of for the sixth wicket.

At Raipur, hosts Chhattisgarh bundled out Maharashtra for 239 on the opening day of their Ranji Trophy game. For the visitors, Rahul Tripahi top scored with 102. In their first innings, Chhattisgarh were teetering at 23 for three, still 216 runs behind.

At Nagpur, riding on opener Kathan Patel's 105, Gujarat scored 263 for six against regaining champions Vidarbha. At close of play, wicket-keeper Dhruv Raval (69 not out) was holding fort with Karan Patel (27 not out).

At Shimoga, Karnataka ended the first day at 208 for nine with Siddharth K V top scoring with 69 against Railways.

BCCI's North Zone curator Sunil Chauhan overwatered the Feroz Shah Kotla pitch and then, breaching protocol, left the venue before the start of Delhi-Madhya Pradesh Ranji Trophy match on Saturday, his indiscretion leading to a delay of two and half hours.

Despite perfect weather conditions, the match began in the second session.

While the hosts reduced MP to 132 for nine courtesy left-arm spinner Vikas Mishra's 6/41 in 18 overs, the delay in proceedings could land the Himachal Pradesh curator in trouble.

Off-spinner Shivam Sharma got 3/48 on a pitch where the ball kept low, but there was some turn on offer, with the odd ball taking off from the spot.

As per BCCI rules, the neutral curators are sent to prepare pitches so that home teams cannot take any advantage, and they are only supposed to leave after lunch on the first day, when local curator takes charge.

On Saturday, much to the dismay of the Delhi team, match referee Daniel Manohar (former Hyderabad batsman) and the two umpires Virender Sharma and Sanjay Hazare found out that the pitch was wet and under no circumstances could start the game as scheduled at 9.30 am.

It was then realised that the Dharamsala-based curator Chauhan, who was in charge of preparing the strip, had watered it the previous evening.

"Under Sunil Chauhan's instructions, the pitch was watered on Friday evening. He himself is from Dharamsala and knows the weather conditions in Northern India inside out. The pitch was watered around 4 pm and naturally it was cold and moist with little sunshine," a senior DDCA official, privy to development, said.

When the match officials came to the ground in the morning, as per BCCI rules, Chauhan was supposed to be present for the handover of the ground to the match referee. He was nowhere to be seen, though.

"Chauhan had to stay back till first day lunch which is the common rule for all neutral curator before the local curator takes over. He left and then our curator Ankit Datta had to get the ground ready along with outsourced groundsmen as the regular groundsmen have gone on strike," the official said.

However, BCCI GM (Cricket Operations) Saba Karim admitted that the situation could have been avoided and he has sought a report from Chauhan.

"I agree that what happened at the Kotla today shouldn't have happened but I believe Mr Chauhan must have had some compelling reasons to have left early. He took a 10 am flight from Delhi. Normally, he has never done that, so I would like to believe that there is some reason behind it. We will find out," Karim

A disciplined bowling effort helped Himachal Pradesh bowl out Tamil Nadu for 227 on the opening day of the Ranji Trophy Elite Group B match in Dharamsala.

In reply, the host lost the wicket of captain Prashant Chopra (5) to end the day at 25 for one.

Electing to bat, Tamil Nadu was in trouble early, losing both the openers early -- with N Jagadeesan falling for 3, while Abhinav Mukund was dismissed for a duck.

This brought together Baba Aparajith and his twin brother, Indrajith, the captain out in the middle. The duo was involved in a 62-run partnership as the visitors recovered from the early jolts.

Indrajith (30), who has been in good touch and leads the run-scoring chart, was bowled by medium-pacer Raghav Dhawan for 30.

The experienced Dinesh Karthik (31) was dismissed by Guleria as he failed to carry on after a good start.

Vijay Shankar was sent back at the same score, caught by Mayank Dagar for six to leave Tamil Nadu in a mess.

With Tamil Nadu in danger of being bowled out for a below-par score, Abhishek Tamwar, brought into the side in place of K Vignesh, made a valuable contribution of 44 to help the team get past the 200-mark.

Jaiswal was the most successful bowler for HP with 3 for 45, while Guleria, Raghav Dhawan and Chopra took two wickets each.

At stumps, Uttar Pradesh were 257 for 4 with Garg and Rinku Singh batting on 113 and 13 respectively.

Uttar Pradesh won the toss and decided to bat first, but the things didn't go as planned with the hosts struggling at 21 for three by the seventh over. Openers Samarth Singh (0) and Shivam Chaudhary (10) were dismissed cheaply followed by Umang Sharma (7).

Nath and right-hand batsman Garg anchored the Uttar Pradesh innings with a 201 runs partnership. Nath's 106 off 216 balls was studded with 12 boundaries and two sixes while Garg, who was unbeaten at 113, hit 12 fours and one maximum before the captain was trapped leg before by a Rana Dutta delivery in the 75th over.