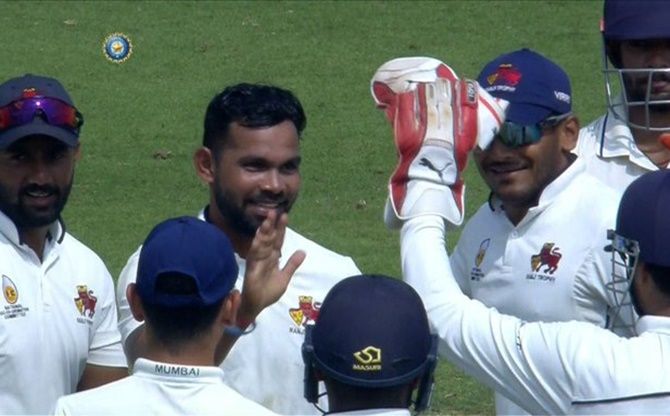 A disciplined bowling effort helped Mumbai reduce Tamil Nadu to 249 for 7 in their first innings to take control of their Ranji Trophy Group B match, in Chennai, on Monday.

Tamil Nadu now trail by 239 runs at stumps on the third and penultimate day. Mumbai had declared their first innings at 488 on the second day on Sunday.

A middle-order collapse which saw the home side lose three wickets without a run being scored reduced them to 178 for 5 and subsequently to 195 for 7 before the experienced R Ashwin (32 batting, 96 balls, 2 fours) and R Sai Kishore (17 batting) came up with a rearguard action.

Resuming at the overnight 66 for no loss, the home side received an early jolt when Test discard Abhinav Mukund (58) fell after adding just six runs to his overnight score.

The other opener L Suryapprakash, who made 41 in 169 balls (6 fours, 1 six), was the next to go, caught by Tushar Deshpande off debutant Vinayak Bhoir.

M Kaushik Gandhi, who was recalled to the Tamil Nadu squad a couple of matches ago, batted well and held one end up as the visiting side kept things tight. He looked good for a big one before charging out to a delivery from Shams Mulani to be stumped by Adiyta Tare for 60.

Skipper Baba Aparajith (14) fell leg-before wicket to Deshpande and two wickets followed in quick succession without the addition of any run.

Baba Indrajith, the comeback man, on whom a lot depended, fell to a brilliant catch by Jay Bista off Royston Dias for 6.

Dinesh Karthik, who batted at No. 7, after having missed a major part of play on Sunday owing to back spasms, followed Pradosh Ranjan Paul (0).

Ashwin and Sai Kishore showed a lot of patience and hung on even as Tare brought changes in an effort to break the stubborn eighth-wicket partnership.

Speaking at the end of play, Tare praised the bowlers for their disciplined effort and the fielding, especially by Jay Bista, who took two superb catches.

Medium pacer Abhijeet Saket returned with a career-best match haul of 10 wickets to power Bihar to an innings and 183-run victory over Manipur in their Ranji Trophy Plate group fixture in Balurghat (West Bengal.

Abhijeet, who had claimed 7/12 against Mizoram in the last outing, was again at his best this morning, grabbing 7/43 as Manipur were skittled out for 94 with only two of their batsmen getting to double digits.

Following on, Manipur fought better with No. 8 Rex Rajkumar waging a lone battle during his 77 not out, but Shivam Kumar (4/68) and Abhijeet (3/35) shared seven wickets between them to bundle them out for 154 in 43.5 overs, handing Bihar their second victory.

Bihar opener Indrajit Kumar, who laid the foundation with his 134 on the opening day, was adjudged Man of the Match.

Bihar now have 15 points from four matches to be at fourth place, while Manipur have 12 from five games.

All-rounder Jalaj Saxena picked up seven wickets for 51 runs with his off-spin to guide Kerala to a 21-run win over Punjab in a low-scoring Ranji Trophy Group A match in Thiruvananthapuram.

Chasing a meagre 146 runs for win, Punjab lost wickets at regular intervals with Saxena turning out to the star for Kerala on the third and penultimate day of the four-day match.

Besides Saxena, left-arm orthodox bowlers Sijomon Joseph (2/37) and M D Nidheesh (1/18) were the other wicket takers as Kerala shot out Punjab for 124 in 46.1 overs in their second innings.

Lower-order batsmen Mayank Markande (23) and Siddharth Kaul (22) were the top-scorers for Punjab even as skipper Mandeep Singh (10), Sanvir Singh (18) and Gurkeerat Singh (18) failed miserably in what should have been an easy chase.

Earlier, resuming at the overnight score of 88 for five, Kerala were bundled out for 136 in 39.5 overs in their second innings, setting a gettable target of 146 for Punjab.

Kerala pocketed six points by virtue of the outright win.

In another Group A match in Ongole, Andhra need seven more wickets on the final day to register an innings win over Hyderabad.

At stumps, Hyderabad are still trailing Andhra by 219 runs with seven wickets in hand.

After scoring 225 in their first innings, Hyderabad were 45 for 3 in their second essay.

Andhra declared their first innings at a mammoth total of 489 for 8.

In another Group A encounter in Jaipur, Rajasthan made 327 for seven in their first innings in reply to Gujarat's 325.

As many as 12 wickets tumbled at the Chaudhary Bansi Lal Cricket Stadium in Lahli with Odisha medium pacer Suryakant Pradhan claiming 5/86 and also effecting a run-out to help Odisha seize control in the first hour.

In a fine display of seam bowling, Pradhan claimed three wickets in five overs en route to figures of 5/86. Pradhan also ran out the No. 10 Ashish Hooda (0) as Haryana lost five wickets in 12 overs to be bundled out for 248.

Folded for 90 in their first innings, Haryana staged a fightback to see through the second day on 218 for five.

But Pradhan's stupendous bowling ensured that they lost the remaining five wickets for 30 runs inside the first hour, setting a paltry target of 179.

It was time for Haryana medium pacer Ajit Chahal to grab the limelight with his 6/65 as Odisha made a mockery of the chase to find themselves reeling at 147/7 at close of play.

Rajesh Dhuper was unbeaten on 29 with Rajesh Mohanty (four not out) for company as the group C leaders strived to keep themselves in hunt for a fourth outright win.

Unbeaten in four matches, Odisha, with three wins and a draw, have 22 points from four matches, one clear of second-placed Haryana.

But Chahal came to haunt the visiting batsmen by giving the breakthrough at the stroke of first drinks break, trapping Lenka, as Odisha lost five wickets for 37 runs.

With Chahal on a roll, it was Govinda Poddar (30), Suryakant Pradhan (12) and Rajesh Dhuper (29 batting), who showed some resistance to take Odisha closer to the target.