A round-up of Ranji matches played on Monday 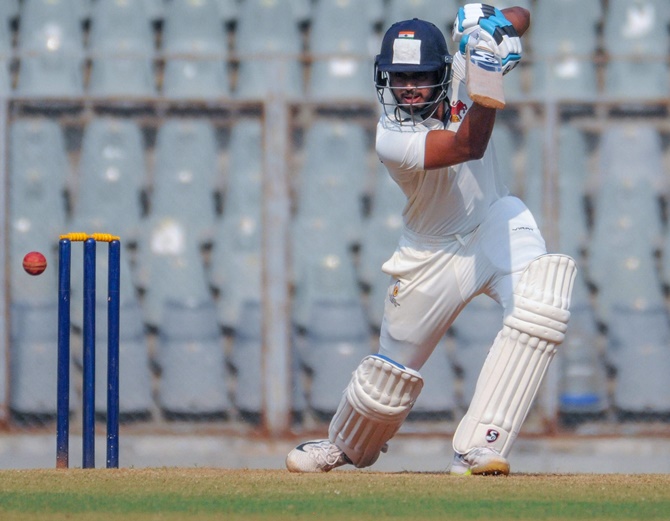 Shreyas Iyer blitzed his way to 83 of just 60 balls after Mumbai pressed on for a much-needed outright victory after taking the first innings lead over table toppers Saurashtra in their Ranji Trophy tie.

Iyer slammed seven sixes, three of them off successive balls from left-arm spinner Dharmendra Jadeja before perishing to the fourth ball while trying for a fourth maximum hit.

Mumbai ended day three of the four-day Elite Group A match by making 175 for five in their second innings, an overall lead of 221 going into the final day on Tuesday.

Iyer, who looked out for runs from the first ball he faced after coming to the crease at 20 for one, also struck 5 fours and got involved in a rapid-fire fourth wicket stand of 74 in 57 balls with all rounder Shivam Dube who made a brisk 29-ball 39 with the help of three sixes and as many fours.

Earlier, resuming at the overnight 213 for five chasing Mumbai's first innings total of 394, Saurashtra were bowled out for 348, with 12 minutes left for tea.

Mumbai got rid of Prerak Mankad, who was the not out batsman at stumps last evening along with Chirag Jani, early on for 59 with the score on 230.

But Jani kept his end up and prolonged the innings in the company of the lower order batsmen before he was last out for 85 in 176 balls, laced with one six and seven fours.

Saurashtra's hope of taking the lead did not materialise and Mumbai, languishing low down in the combined A and B Groups table, expectedly went for quick runs when they commenced their second innings after tea.

They lost wickets too, in the process, and were 44 for 3 before Iyer and Dube lashed out at the bowlers with Jadeja and left arm medium pacer Hardik Rathod bearing the brunt of the onslaught.

Dube departed when he failed to clear the cover fielder off rival captain Jaydev Unadkat who had earlier dismissed first innings centurion and opener Jay Bista.

But Iyer and Dube came together and took the bowling apart to wrest back the initiative.

At stumps, Shubham Ranjane (12) and Aditya Tare (7) were at the crease for Mumbai.

Meanwhile at Raipur, Chhattisgarh were in a good position to score an outright win over Maharashtra, who ended the third day at 172 for 3 in their second innings, still trailing by 51 runs.

At Nagpur, hosts Vidarbha posted a hefty 485 in their first essay and overhauled Gujarat's first innings score of 321.

Veteran Wasim Jaffer slammed 126 and there were crucial contributions by the middle order batsmen for the hosts. Gujarat ended the penultimate day At 22 for 1, still trailing by 142 runs.

At Shivamoga, Railways needed 318 runs to win against hosts Karnataka, with nine wickets in hand.

Left-arm spinner Vikas Mishra yet again tormented Madhya Pradesh batsmen with a six-wicket haul as Delhi thumped the visitors by nine wickets for their first victory of the ongoing Ranji Trophy season, in New Delhi, on Monday.

The 25-year-old Mishra, who had taken six wickets in the first innings as well, finished with career-best match figures of 12 for 71 to help Delhi bundle out Madhya Pradesh for just 157 run in 64.3 overs on the third day of their Elite Group B fixture.

The hosts needed to score just 29 runs without losing wicket to claim the win with a bonus point but lost opener Kunal Chandela (6) two runs short of the target to settle for six points.

Hiten Dalal (15) and Dhruv Shorey completed the win in 6.4 overs. Delhi will next take on Bengal in an away match from December 30.

The visitors resumed at seven for none and their inexperienced openers -- Aryaman Birla (32) and Anand Bais (46) -- put upa fighting 83-run stand but once left-arm pacer Kulwant Khejroliya snared the former, it opened the floodgates.

The MP batsmen again struggled to counter the guile of Mishra, who ran through the middle order.

Not only Mishra (6/30), but the visiting batsmen also struggled to counter off-spinner Shivam Sharma (3/52) as the two spinners shared nine wickets between them.

Rajat Patidar (21), captain Naman Ojha (22) and Yash Dubey (15) got starts but the kind of fight MP needed was no where to be seen or rather the wily Mishra made the rival batsmen dance to his tunes.

After dismissing Ojha and Dubey, Mishra trampled the lower-order along with spin colleague Shivam, who claimed the last wicket in Avesh Khan (6).

Uttar Pradesh defeated Tripura by an inninngs and 384 runs in their Elite Group C Ranji Trophy game in Lucknow.

Uttar Pradesh, who were in command right since the beginning of the four-day game, posted a convincing win with a day to spare.

After posting a mammoth 552/7 in their first innings, courtesy a double hundred by Priyam Garg and hundreds by Rinku Singh and skipper Aksh Deep Nath, their bowlers ensured that the batsmen need not bat again.

Resuming at the overnight score of 33/4, Tripura's first innings folded up at 108 in just 44 overs.

Apart from skipper and wicket-keeper Smit Patel (47)no other batsmen delivered for the visitors.

Following on, Tripura batsman did not learn from their mistakes and faltered yet again.

The north-eastern side, in its second essay, was bowled out for just 60 and Uttar Pradesh needed mere 25 overs to complete Tripura's rout.

In the second essay, 25-year-old right-arm medium pacer Ankit Rajpoot wreaked havoc and returned with exceptional figures of 6-25 and was superbly aided another pacer Imtiaz Ahmed (3-30).

For Tripura, such was the misery that only one batsman was able to cross the individual double-figure mark.

Meanwhile at Guwahati, Goa needed another 52 runs for an outright win against Assam and have four wickets in hand.

Their hopes depend on Amit Verma and Lakshay Garg, who are unbeaten on 62 and 57, respectively.

At Jammu, Odisha would aim to go for an outright win as Jammu and Kashmir are 76 runs ahead with just three wickets remaining and an entire day's play left.

At Jaipur, visitors Haryana ended the third day at 244/3, but still are trailing Rajasthan by 128 runs.

Rajasthan secured the first-innings lead after posting a massive 490/6 declared with Robin Bist remaining unbeaten on 150.

Bihar on verge of massive win vs Nagaland

Riding on a solid batting display in their second innings, Bihar were on the verge of a massive win over Nagaland in their Ranji Trophy Plate Group fixture in Patna.

Having conceded a 59-run first innings lead after being bundled out for 150 at the Moin-ul-Haq Stadium here, Bihar bounced back in their second essay to declare at 504/8.

Debutant Mangal Mehrur slammed 177 while MD Rahmatullah scored 107 as they continued their overnight stand to put together 177-run for the fourth wicket.

Wicketkeeper batsman Vikash Ranjan (53 not out) and Utkarsh Bhaskar (46) also made significant contributions as Bihar set a stiff 446-run target.

Nagaland were 112/7 at close on the penultimate day and they still need 334 with three wickets in hand.

Ashutosh Aman, who had claimed 7/47 to turn the match around in favour of his side, bagged 3/26 in Nagaland's second innings for a match haul of 10 wickets.

In Puducherry: Uttarakhand 20 for no loss; 8.2 overs vs Puducherry. 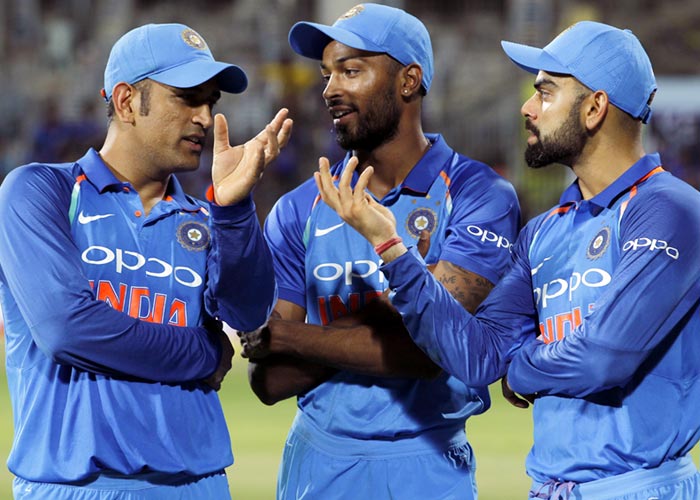 Dhoni back in T20 squad for NZ, Pant dropped from ODIs 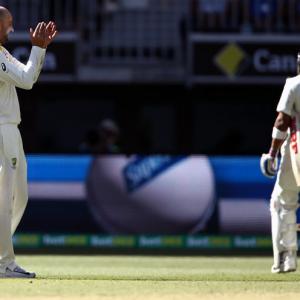 Will Lyon continue his good record against Kohli?