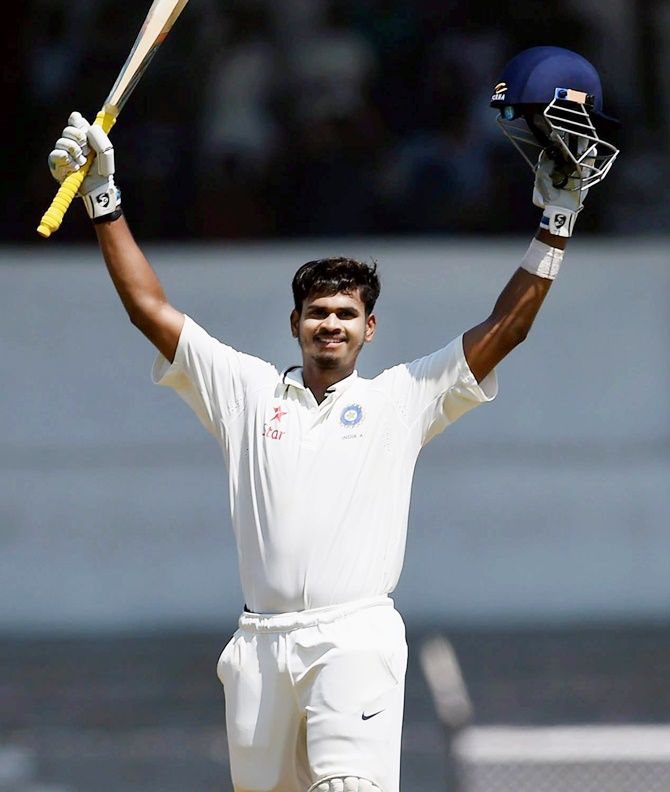 IMAGE: Shreyas Iyer slammed smashed 11 sixes and 17 fours in his blazing innings of 178 of Day 1 of the Ranji Trophy against Baroda. Photograph: BCCI

Shreyas Iyer slammed 11 sixes and 17 fours in a blistering knock of 178 and put on a double century stand with captain Siddhesh Lad, who made a responsible 130, to power Mumbai to an imposing score of 439 for eight against Baroda, on Day 1 of the Ranji Trophy match in Mumbai, on Friday.

Iyer, who landed in Mumbai only on Thursday from New Zealand after a stint with India 'A', was in punishing form, sparing no one from the visitors' ranks to compile his 12th first class hundred in his first Ranji game of the season as he rescued the hosts from 28 for two with a stand of 283 in just over 45 overs with Lad on day one of the elite Group A game.

Hardik Pandya, back in competitive cricket after recovering from a back spasm that he suffered in the Asia Cup in UAE in September, had opened the bowling and rocked Mumbai with a two-wicket haul for 21 in his impressive comeback spell of six overs after Mumbai were put in to bat at the Wankhede Stadium.

Pandya's cheap dismissals of openers Aditya Tare and newcomer Vikrant Auti had no effect on Iyer who went on a run-scoring spree to take the wind out of Baroda's sails and place Mumbai, who are languishing in the 16th out of 18 spots on the points table, in a commanding position at stumps.

Iyer smacked left-arm spinner Bhargav Bhatt for three sixes in four balls to race to his century off just 86 balls and then singled out veteran Yusuf Pathan for similar punishment by carting the off-break bowler for three
successive sixes to smash his way to 150. A more sedate Lad, who faced 173 balls and struck two sixes and 12 fours, denied Baroda a wicket for more than four hours spread over the first two sessions.

Pathan got his revenge by having Iyer caught at wide mid-wicket by Vishnu Solanki to end the third wicket stand but by then the visitors' bowlers had been sent on a leather hunt by the Mumbai duo.

Mumbai, 148 for 2 at lunch, advanced to 333 for three at tea thanks to the belligerent knock of Iyer, and then Baroda grabbed five more wickets before stumps with Pandya snapping up one more victim, the in-form all rounder Shivam Dube, to finish with end of day impressive figures of three for 74 in 15 overs.

Bhatt picked up four wickets while Pathan was the other successful bowler.

Meanwhile, at Surat, despite skipper Priyank Panchal's 94, Gujarat were bowled out for 216 against Karnataka. For the visitors, Vinay Kumar, Prateek Jain, Ronit More, Krishnappa Gowtham and Shreyas Gopal picked two wickets each.

All-rounder Vijay Shankar stood tall among the ruins with a knock of 71 as Tamil Nadu struggled to 213 for nine against Punjab on the opening day of the Ranji Trophy Elite Group B match in Mohali.

Sent in to bat by the host, the Tamil Nadu openers were given a stern test by pacers Manpreet Singh Grewal, Sandeep Sharma and Baltej Singh, who made good use of the conditions.

Grewal bowled superbly to finish with figures of five for 56 to leave the visiting side in danger of being bowled out for a below-par total. He made use of the favourable conditions to trouble most of the batsmen and was rewarded with wickets.

Left-hander Abhinav Mukund had a harrowing time at the crease before edging one to wicketkeeper Abhishek Gupta for five.

N Jagadeesan, pushed up to open the innings in place of the axed M Kaushik Gandhi tried to hit his way out of trouble but was trapped leg before wicket by Baltej for 19 in the 15th over, to leave Tamil Nadu tottering at 31 for three.

The experienced Dinesh Karthik (26) joined Baba Aparajith in the middle and the two looked to repair the damage. They did succeed in their attempt to a certain extent before Baltej produced another cracking delivery to bowl Karthik.

With the score on 111, Aparajith was unlucky to see a defensive shot bounce back and roll on to the stumps.

Shankar, who shone for India 'A' in the recent series in New Zealand, played confidently and ran judiciously. He also played several handsome shots on both sides of the wicket and hit seven fours.

Grewal's strikes reduced the visitors to 213 for nine after appearing to have recovered from the early losses.

At Hyderabad: Bengal 99 for 2 in 38 overs (Abbimanyu Easwaran 57 not out) vs Hyderabad.

Half-centuries by Jalaj Saxena (68) and Vinoop Sheela Manoharan (77) helped Kerala recover from 155 for six to 291 for seven at stumps against Delhi on the opening day of their Ranji Trophy Elite Group B match, in Thiruvananthapuram.

Electing to bat, the hosts suffered an early blow when opener V A Jagadeesh was bowled by Akash Sudan for a duck. The second-wicket partnership didn't last long as one-drop batsman Vatsal (4) edged a delivery from Vikas Mishra to wicketkeeper Anuj Rawat to reduce Kerala to 17 for two.

Sanju Samson looked good during his knock of 24 before falling to off-spinner Shivam Mishra in the 22nd over, and he struck again in the same over to send back captain Sachin Baby even before he could open his account.

Opener P Rahul (77), however, held firm and added 51 runs for the fifth wicket with Vishnu Vinod (24) to stabilise the innings.

Rahul, who hit 10 fours and two sixes, was involved in a 46-run stand with Manoharan before being dismissed by Mishra, who claimed four for 78.

Saxena and Manoharan played cautiously initially before going on to play some handsome shots.

The experienced Saxena showed a lot of intent and made 68 off 113 balls before falling to Mishra in the final over of the day, handing back the advantage to Delhi.

Manoharan, meanwhile, played a patient knock to help Kerala recover from a spot of bother to a respectable score.