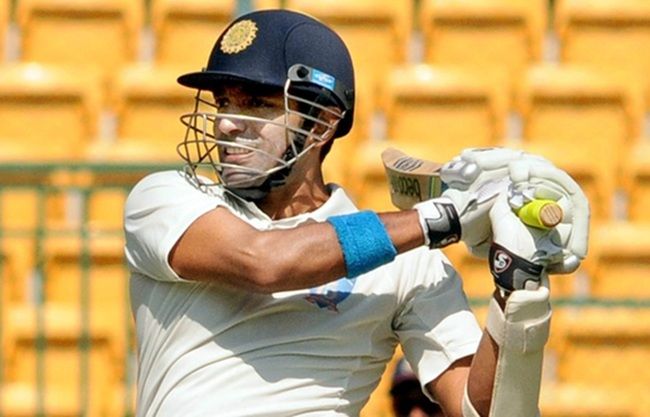 Ashish Hooda scalped four wickets for 39 runs in an impressive pace bowling spell as Haryana came back into their Ranji Trophy Group ‘A’ match against Bengal on the third and penultimate day, in Lahli, on Sunday.

Haryana, led by Virender Sehwag, conceded a 104-run first innings to the visiting team as they were all out for 225 midway in the morning session in reply to Bengal's first innings total of 329 all out.

Overnight batsmen Rohit Sharma (78) and Yuzvendra Chahal (42) were dismissed in quick succession after they shared 105 runs for the ninth wicket as the home side folded their innings.

Sharma and Chahal were instrumental in taking Haryana to a respectable total as the home side were 120 for 8 at one stage before the duo took the total past 200-mark.

With 104-run first innings lead, Bengal found themselves in the drivers' seat but their batsmen came a cropper in their second innings giving Haryana a chance to come back into the match. Bengal ended the day at 146 for 7 for an overall lead of 250 runs with three second innings wickets in hand.

Hooda rocked the Bengal innings early on by dismissing three of the top-four batsmen to reduce the visiting team to 50 for 4. Sudip Chatterji (49) and Pramod Chandila (24) stitched 56 runs for the fifth wicket and that was the biggest Bengal partnership.

Riding on Sreenath Aravind's superb bowling and a quickfire century by Robin Uthappa, Karnataka gained an upper hand as they reduced Rajasthan to 42 for three, chasing 358-run target, at the end of third day's play of their Group ‘A’ match in Jaipur.

On the fourth and final day tomorrow, Rajasthan face an uphill task as they need 316 runs with seven wickets in hand.

Earlier on the day, Karnataka managed to take a slight 32-run first essay lead after bundling out Rajasthan for 241 in their opening innings.

Rajasthan resumed the day on 219 for seven, in reply to Karnataka's first innings total of 281, but the hosts failed to topple the opponents' score as Aravind (3/42) and R Vinay Kumar (3/42) polished off the tail quickly.

In their second innings, Karnataka rode on Uthappa's 128-ball 160, studded with 25 fours and four sixes, to post 318 for five declared.

In their chase, Rajasthan got off to a disastrous start, losing three wickets in the span of just 38 runs with Aravind (2/20) claiming two of the three scalps.

At stumps, opener Pranay Shrama was batting on 24 and Tanveer-Ul-Haq was yet to open his account.

Odisha give strong reply to Delhi on day three

Nataraj Behera and Anurag Sarangi struck fifties as Odisha gave a strong first innings reply to Delhi by reaching 195 for four on day three of the Ranji Trophy Group ‘A’ game in Bhubaneswar.

Sarangi was unbeaten on 76 while Behera made 62 at the top to take the hosts closer to Delhi's 311 at the KIIT stadium.

The home team was in a spot of bother at 40 for two before Behera and Sarangi shared a 77 run stand to steady the ship.

Behera departed after a 92-ball stay but Sarangi made sure he held fort till stumps. Sarangi was patient in his 182-ball vigil, collecting 11 fours in the process.

Behera scored at a brisk pace with his innings comprising 12 fours.

Left arm pacer Pradeep Sangwan was the pick of the Delhi

Vetaran Paras Dogra smashed an unbeaten double ton to help Himachal Pradesh gain complete control against Tripura at stumps on the third and penultimate day of their Group ‘C’ match in Dharamsala.

Dogra, overnight unbeaten on 21, finished unbeaten on 209 off 241 balls with the help of 23 boundaries and six hits over the fence as Himachal Pradesh declared their first innings at 561 for five in reply to Tripura's 285.

Apart from Dogra, Robin Bist made 58 while Nikhil Gangta scored 50.

Tripura were 88 for three in 30 overs in their second innings.

The visitors still need to amass 188 runs to avoid an innings defeat, which looks highly unlikely with one full day's play remaining in the match.

Rajat Paliwal and Yashpal Singh struck a century each Services reached 311 for 6 in their second innings on the third and penultimate day of their match against Saurashtra in New Delhi.

Services, who conceded a 10-run first innings lead to the visiting team put up a strong show in their second essay with Paliwal and Yashpal doing most of the run scoring at the Palam Ground.

The pair also shared a 187-run stand that steadied Services after the top order was dismissed by the 21st over.

Fast bowler A Aswin Crist registered the best bowling figures of his first class career to help Tamil Nadu enforce follow-on on Railways on the third and pentultimate day of their Group ‘B’ match in New Delhi.

After posting 328 in their first innings, Tamil Nadu rode on Aswin Crist's (6/60) brilliant bowling to bundle out Railways for 164 after the hosts resumed at the overnight score of 129 for seven.

But following on, Railways batsmen produced a much better account of themselves in the second essay to take the hosts to 200 for four at stumps at the Karni Singh Stadium.

Opener V Cheluvaraj, who scored 66 in the first innings, carried on his good formm and remained unbeaten on 80 that came off 198 balls and was studded with 14 boundaries.

He was ably supported by wicket-keeper batsman Mahesh Rawat, who was unconquered on 77 off 111 balls with the help of 10 fours and three sixes.

The duo had put on unbeaten 123 runs for the fifth wicket after Railways lost four wickets for 70.

But the task is far from over for Railways as they lead Tamil Nadu by just 36 runs and Cheluvaraj and Rawat will have to bat out of their skin tomorrow to save the match and eke out a draw for the hosts.

Baroda made 296 all out in reply to Madhya Pradesh's 269 to take the vital first innings lead on the third and penultimate day of their Group ‘B’ match in Vadodara.

Resuming at the overnight score of 188 for four, Aditya Waghmode (68) added just four runs to his Saturday's score being dismissed.

But big-hitting Yusuf Pathan, not out on 27 last evening, made a sedate 55 that came off 102 balls with the help of two boundaries and as many sixes, while Swapnil Singh made 48 hand Baroda the crucial 27 runs lead in the first innings.

Madhya Pradesh scored 113 for the loss of two wickets in 40 overs in their second innings at the close of play.

At stumps, Rajat Patidar was unbeaten on 29 and giving him company was Harpreet Singh (11).

Maharashtra need another 241 runs to win against Vidarbha

Maharashtra needed another 241 runs to win their match against Vidarbha at stumps on day three in Nagpur.

Chasing 244, Maharashtra started their second innings with opener Swapnil Gugagale back to the pavilion on a duck.

At the end of third day's play Maharashtra were 3 for 1 in three overs.

Vidarbha, who had obtained a 95-run lead, were bowled out for 149 in their second innings with a five wicket haul from Akshay Darekar who ran through the home side.

Opener Wasim Jaffer (33) and lower order batsman Amol Ubarande (47) struck some lusty blows to bring some respite to the home side .

Maharashtra were dismissed for 237 in their first innings while Vidarbha scored 332.

Earlier in the day, Maharashtra resumed their first innings with 144 for 6 wickets on the board.

Akshaya Sarwate struck with 3/41 to help the home side gain vital lead.

Hyderabad were 122 for two in their second innings on day three, trailing Jammu and Kashmir by 58 runs after following on in the Group ‘C’ match in Hyderabad.

Hyderabad, resuming their first innings at 113 for two, were bowled out for 280 courtesy a spirited bowling effort J&K's Rohit Sharma and Zahoor Sofi, who picked up four wickets each.

The hosts were grinding it out in the second innings with Hanuma Vihari (46*) and Dereck Prince (56)* at the crease.

Jharkhand leg-spinner Samar Quadri's brilliant six wickets for 97 runs restricted Goa to 302 in their first innings on the third and penultimate day of their Group ‘C’ match in Jamshedpur.

Goa, however, clawed their way back with four wickets, leaving the home side at a shaky 159 for 4 in their battle for first-innings points going into the fourth day on Monday.

Goa lost overnight batsman Swapnil Asnodkar and Snehal Kauthankar early on the third morning before being revived by a 58-run partnership for the fifth wicket between Rituraj Singh and Darshan Misal.

The lower order tried to rally once that partnership was broken but Quadri and left-arm spinner and Jharkhand captain Shahbaz Nadeem ran through the rest of the line-up to bring an end to the Goa innings.

In reply, Jharkhand's Sumit Kumar and Shiv Gautam shared a 64-run partnership for the second wicket after opener Prakash Munda was dismissed for only 2.

Shadab Jakati, however, struck with three quick wickets to push Jharkhand from 60 for 1 to 106 for 4. Gautam and Kumar Deobrat then steadied the innings, playing out the day with a 53-run partnership.