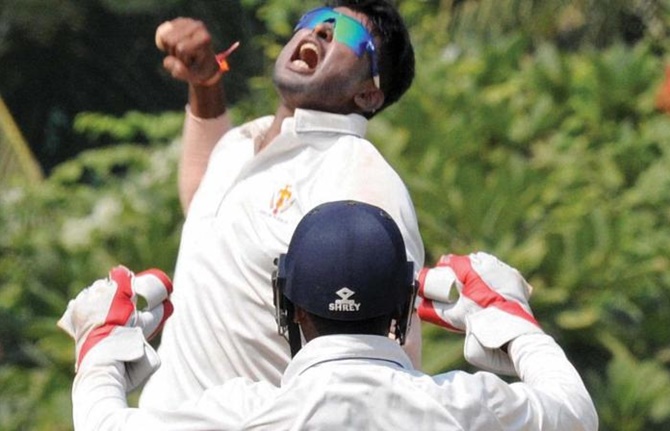 Off-spinner K Gowtham's eight-wicket haul helped Karnataka beat Tamil Nadu by 26 runs in a thriller on the fourth and final day of in its opening Ranji Trophy Group 'B' match, in Dindigul, on Thursday.

Requiring 181 to post a win after conceding the first innings lead, the home team was all out for 154 in the second innings.

It was a brilliant performance by the off-spinning all-rounder after Test star Ravichandran Ashwin (4/46) had brought Tamil Nadu back into contention by picking up four wickets to help the team bowl out Karnataka for 151 in the second innings.

Tamil Nadu suffered a setback after a bright start to the chase with openers-Mukund (47) and Murali Vijay (15) putting on 49 runs in quick time with some positive batting as they lost three wickets in the space of four runs.

The run-out of Vijay by substitute fielder R Samarath sparked the slide as his quick pick-up and throw caught the experienced right-hander short of his crease.

The dismissals of B Aparajith (0) and R Ashwin (2), both leg-before to Gowtham, hurt Tamil Nadu.

A lot depended on Mukund and first innings centurion Dinesh Karthik but the former went after an enterprising innings, caught by Karun Nair off Gowtham.

Karthik was done in by a superb delivery by Gowtham to be bowled for 17.

His exit and the fall of skipper Vijay Shankar (5), caught brilliantly by Ronit More, pushed Tamil Nadu into more trouble.

Karnataka had beaten Tamil Nadu in the finals of the Vijay Hazare Trophy (50 overs) and Syed Mushtaq Ali Trophy (T20) coming into this encounter.

Earlier, Ashwin and K Vignesh got among the wickets to restrict Karnataka to 151.

Resuming at 89 for 5, the visitors lost 'keeper BR Sharath for the addition of only four runs.

At 119 for 7 and in danger of being bowled out for a below-par score, Karnataka found a saviour in Gowtham who smote two big sixes in his 22 (33 balls) as it helped take the total past the 150-mark.

Tamil Nadu next meets Himachal Pradesh at Tirunelveli from December 17 to 20.

Domestic giants Mumbai began their 2019-2020 Ranji Trophy season on a winning note, as they thrashed Baroda by 309 runs in their Elite Group B game in Vadodara.

Baroda set a stiff target of 533 runs and needed another 460 runs to win.

The hosts were teetering at 74/3 when play resumed and needed to play out the whole day to settle for a draw and avoid an outright defeat.

But Shams Mulani, who had shone with the bat in the first essay and also picked a fifer, ran through the Baroda line up, as the side was bundled out for 224.

Mulani ended with the figures of 4-72, as the 41-time domestic champions went for the kill.

The left-arm spinner was ably supported by off-spinner Shashank Attarde (2-61) and medium pacer Akash Parkar (2-16), as Mumbai fetched six points from the lung-opener.

For the hosts, Deepak Hooda (61; 8x4 and 1x6) and two-down Abimanyu Rajput (53; 7x4) tried to delay the inevitable by playing defiant knocks. The duo conjured a 81-run stand for the fourth wicket
and frustrated the Mumbai bowlers.

However, Parkar broke the stand by trapping Rajput in front of the wicket.

Mumbai then pegged back Baroda by removing skipper Krunal Pandya (11), experienced all-rounder Yusuf Pathan (14) and Bhargav Bhatt (0) in quick succession to leave them teetering at 7-197.

After offie Attarde removed Hooda, it was all over for Baroda and they were eventually bundled out for 224.

Mumbai had made 431 and 409/4 declared in their two innings and folded up Baroda for 307 in their first essay.

Pint-sized opener Prithvi Shaw had slammed a quick-fire 202 in the second innings and continued his purple patch.

The domestic giants have a lot of positives from the game and would be raring to go in the next round.

Opener Kunal Chandela and Nitish Rana salvaged a commendable draw for Delhi with gritty centuries after following-on against Kerala in their Rani Trophy opener in Thiruvananthapuram.

Delhi, who were bundled out for 142 on a decent batting surface, put up a much improved batting effort after following-on, ending their second innings at 395 for four in 112 overs.

On day three, Anuj Rawat (87) and Chandela had put up a 130-run stand for the opening wicket.

On the fourth and final day, Chandela and Rana added 118 runs for the fourth wicket to frustrate the opposition.

Kerala got a much needed breakthrough early in the day when first-innings star Jalaj Saxena removed Delhi skipper Dhruv Shorey (20). After that, it was all Delhi as Chandela and Rana held fort. Chandela hit 11 fours in his dogged knock while Rana smashed four sixes and 11 boundaries.

Jonty Sindhu (30 not out) and Lalit Yadav (13 not out) were in the middle when the match ended.

In Jaipur, Punjab wrapped up the game by 10 wickets by bowling Rajasthan out for 168 in their second innings.

In Hyderabad, Gujarat pocked six points with an eight-wicket win over the hosts. Gujarat dismissed Hyderabad for 266 in their second innings. Set a 187-run target, Gujarat got the job done in 36.4 overs with the loss of two wickets. Priyank Panchal scored 90 and Bhargav Meria an unbeaten 69.

Haryana beat Maharashtra by innings and 68 runs in Ranji match

Haryana skipper Harshal Patel led from the front with a five-wicket haul to set up an innings and 68 runs victory in the Ranji Trophy Group C opener against Maharashtra on the fourth and final day in Rohtak.

Resuming at overnight 61 for 5, the visitors' second innings lasted only 10 more overs as Patel (5/12) hastened the end with some incisive bowling.

Maharashtra were bundled out for 86 in their second innings after making 247 in their first knock.

The 29-year old Patel, who had taken four wickets in the first innings, was at it again and picked up the wickets of Azim Kazi (17), Pradeep Dadhe (0) and number 11 Samad Fallah (0) to signal the win for Haryana.

He struck the first blow by removing Kazi, having him caught behind by Nitin Saini.

Ashish Hooda got into the act and scalped the wickets of Avdhoot Bandekar (14) and Satyajeet Bachhav (10) as Maharashtra slipped to 85 for 8 before Patel cleaned up the tail to ensure seven points for the home side.

Earlier, Maharashtra had made 247 in response to Haryana's first innings score of 401 built on superb tons by opener Shubham Rohilla (142) and middle-order batsman Shivam Chauhan (117).

Meanwhile, the final day's play between Assam and Services in Guwahati was on Thursday suspended due to the curfew imposed in the city following protests over the Citizenship (Amendment) Bill.

Earlier on Wednesday, Jammu & Kashmir and Odisha had posted victories over Uttarakhand and Chhattisgarh respectively.