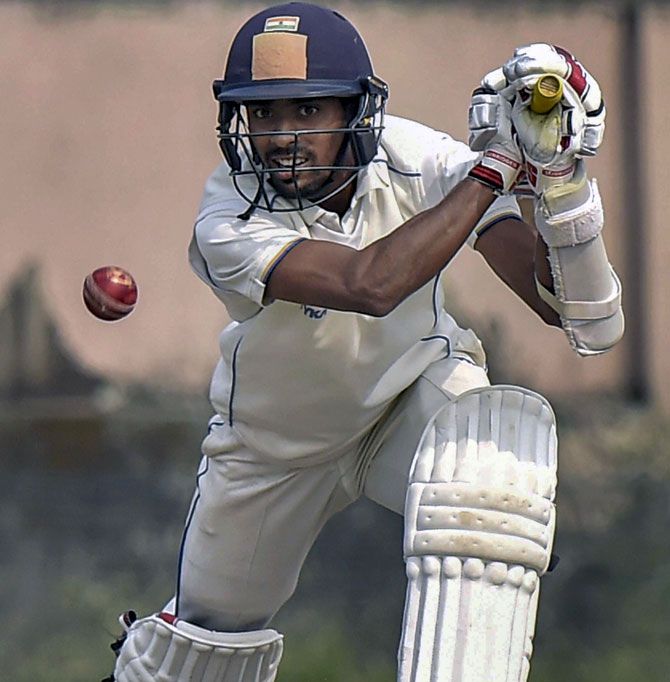 Bengal opener Abhimanyu Easwaran's maiden double hundred went in vain as Bengal failed to qualify for the knockout stages after their final Ranji Trophy Group B encounter against Punjab ended in a draw in Kolkata.

Abhimanyu batted close to 10 hours and remained unbeaten on 201 from 373 balls in his marathon knock that delayed Bengal's declaration to post-tea session in the must-win contest.

With the India 'A' opener being given an opportunity to achieve personal milestone, any chances of a sporting declaration went up in smoke.

One of Bengal's biggest bane this season has been bowling.

That veteran Ashok Dinda in one of his underwhelming seasons with only 28 wickets from 8 games had emerged as highest wicket-taker tells a sorry tale that even after five seasons, there is no one better than him.

Bengal declared at 432/6 after Abhimanyu completed his milestone, setting Punjab an improbable target of 173 in 16 overs, with one-hour's play left on the final day.

Taking up the challenge with a positive mindset, Manpreet Gony played a whirlwind innings of 58 from 28 balls, hitting two fours and six sixes, as he smashed Bengal bowlers all around the Jadavpur University Salt Lake Campus, and took just 21 balls to notch his second consecutive half-century.

The contest was reduced to a T20 affair with Gony leading Punjab charge. But Gony was cleaned up by Pradipta Pramanik in the 13th over as Punjab were restricted for 132/5 in 15 overs to settle for three points on basis of their first innings lead.

Both the teams finished with 23 points to finish behind Madhya Pradesh (24) and Kerala, who became the only to qualify from Group B with 26 points.

Punjab lost openers Shubman Gill (eight) and Anmolpreet Singh (six) for 25 runs in 3.1 overs as they promoted Gony to No 3.

The Punjab big-hitter seized the initiative with veteran Yuvraj Singh (12 from nine balls) before he ran out the former star allrounder in the fifth over.

But Gony kept the run flow going with skipper Mandeep Singh (35) and he even got a reprieve on 43 when Writtick Chatterjee dropped him at long-on.

Punjab were 105/3 after 10 overs as the target seemed within rich with Gony punishing the Bengal attack.

In the next over, Gony looked to break free against left-arm spinner Pradipta Pramanik only to be cleaned up after missing the line.

Three balls later Mandeep was run out by Dinda as Punjab were 132/5 in 15 when they settled for a draw.

"Their approach was negative and poor. With 218/2 on the final day, they could have declared early. But they played slow, giving us little chance to go for a win," he said.

Earlier resuming the day on 218/2, Bengal skipper Manoj Tiwary who was overnight 90, notched his second century of the season, and 26th overall.

Tiwary made 105 from 173 balls before being bowled by left-arm spinner Vinay Choudhary as Abhimanyu stayed on to complete his double.

The Bengal opener finished with 861 runs from 6 matches at an impressive average of 95.66 that included three centuries and three fifties.

"He's definitely special. In the last game too, he scored a century in the second innings and played a match winning unbeaten knock," the Punjab skipper said showering praise on Abhimanyu.

"He has got an excellent conversion rate and I think we have to learn from him. Definitely, he's a future of Indian cricket."

Tamil Nadu gained three points for securing the first innings lead against Delhi on the final day of its final Ranji Trophy Group B match in Chennai.

Resuming at the overnight score of 268 for six, Delhi's hopes of overhauling the host's first innings total of 432 rested on centurion Jonty Sidhu and Lalit Yadav extending their partnership. The duo started in a promising manner and played some attractive shots.

Yadav looked good to join Sidhu in scoring a ton, before he fell to Sai Kishore for 91.

Kishore got him caught on the off-side when playing a drive, ending a partnership of 170 runs off 340 balls for the seventh wicket.

The left-arm spinner had Subodh Bhati caught off the first ball of his next over at slip by captain B Indrajith, but his chances of a hat-trick were foiled by a defence-minded Vikas Mishra.

Mishra lasted 42 balls but didn't trouble the scorers and was run-out going for a second run. Navdeep Sain, the No.11, lasted only eight balls and his wicket gave Kishore a well-deserved five-wicket haul.

In the second innings, Tamil Nadu were 113 for one in 40 overs when it chose to declare and bring an end to the proceedings.

Opener N Jagadeesan helped himself to 59 not out as the match meandered to a draw.

Tamil Nadu secured three points to take its final tally after eight matches to 15, while Delhi finished with 14 points.

Nineties by Vinoop Sheela Manoharan and captain Sachin Baby set up the win while Sanju Samson's unbeaten 62 finished things off.

Kerala became the only team from Group B to secure a spot in the quarter-final.

Hosts Saurashtra snatched three crucial points Thursday on the basis of their first innings lead in their Elite Group A game against current champions Vidarbha to make it to the quarter-finals of the Ranji Trophy in Rajkot.

Saurashtra batsmen played out the fourth and the final day and were 218 for 2 when the game was declared drawn.

For the hosts, it was batting practice for Vishvarajsinh Jadeja (105 not out) and Sheldon Jackson (53 not out) as they frustrated the Vidarbha bowlers.

Vidarbha declared on their overnight score of 280 for 9.

Vidarbha, who earned a lone point in the match, ended the league stage as table-toppers in combined A and B Group Standings, to make it to the quarter-finals, as they ended with 29 points.

The other three teams from Group A and B combined to make the last eight were Karntaka (27 points), Kerala and Gujarat (each 26 points).

Baroda also had 26 points, but could not make through as they had lower quotient than Gujarat.

UP make quarters after draw against Assam

Uttar Pradesh became the second side from Group C to make it to the Ranji Trophy quarter-finals after Rajasthan when they drew their final league game against Assam in Kanpur.

Uttar Pradesh took the first innings lead in their drawn affair against Assam to snatch three crucial points, while the visitors had to be content with a lone point.

After bundling out Assam for 175 in the first innings, UP piled on 619 on the back of centuries from Rinku Singh and Upendra Yadav, to take a massive lead.

However, the Assam batsmen led by Gokul Sharma, who struck an unbeaten hundred, played the final day out as the match ended in a tame draw with Assam reaching at 317 for 4.

UP finished second to Rajasthan (51 points) with 41 points and the two teams entered the quarters from this group.

Meanwhile, in their last league game Jharkhand left- arm spinner Shahbaaz Nadeem spun his web around Jammu and Kashmir to guide his side to an innings and 48 runs win.

However, both the teams did not make it to the next round.

Quarter-finals to be played from January 15: