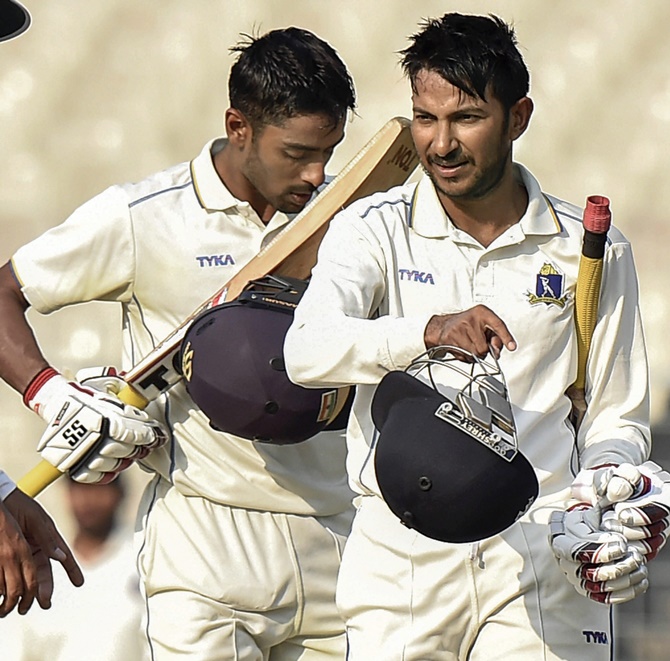 Opener Abhimanyu Easwaran played the innings of his life with an unbeaten 183 as Bengal chased down a record 322 to record a seven-wicket win and virtually knock Delhi out of the Ranji Trophy Elite Group B, in Kolkata, on Wednesday.

Dismissed for 220 in less than 59 overs in the first session, Bengal had a mountain to climb on the final day. But the 23-year-old Abhimanyu, fresh from India A tour to New Zealand under Rahul Dravid, came off age in his composed innings which featured 23 boundaries and two sixes.

Supremely fit, Abhimanyu ran hard for his singles as he found perfect ally in senior teammate Anustup Majumdar who made a valuable 69 not out (8x4) as Bengal took just 70.2 overs to get across the line.
The duo put on 186 runs for the unbroken third wicket to script Bengal's biggest run chase in Ranji Trophy, bettering their 307-run chase against Karnataka here in 2006-07 season.

Wednesday's win kept Bengal's quarterfinal hopes alive as they now occupy seventh place in the combined Elite Group A and B with 22 points.

This also avenged Bengal's semifinal ouster in last season when they lost to Delhi by an innings and 26 runs in Pune.

They next face Punjab here from January 7-10 in a virtual knock-out game.

This was Abhimanyu's second century from three matches this season as he had smashed a career-best 186 against Hyderabad after returning from the India A tour.

Sharing the secret of his transformation, he said: "I was not able to convert my starts and getting out for 50-60 odd runs. Rahul Sir told me rather than eyeing a big score, concentrate on the process. Just play with the situation and go over by over."

Abhimanyu was also given an advice by former India captain and CAB president Sourav Ganguly who was watching from the sidelines.

"At the lunch break, Sir (Ganguly) told me to play till the end," Abhimanyu said, rating this innings as one of his three best so far.

On a fast Eden Gardens outfield, the Delhi attack was ordinary and it was further depleted with injury to frontline pacer Kulwant Khejroliya who got hurt after taking two wickets in successive overs.

Bengal looked in trouble going into the lunch, losing three wickets in 26 balls after a superb 121-run opening stand between Abhimanyu and Abhishek Raman (52).

Raman gifted his wicket to Nitish Rana, looking to hit inside out and was caught at sweeper cover as Delhi finally got the breakthrough, 15 minutes before the lunch.

Rana quickly brought back his pace spearhead Khejroliya who dismissed Chatterjee LBW off his second ball, before taking Tiwary in his next over.

The duo of Abhimanyu and Majumdar scored at five-plus runs an over, making 122 runs in the decisive second session without losing a wicket.

"They were setting attacking fields and it opened up scoring options. We just played positive and looked for the gaps. The fast outfield did the rest," Abhimanyu said.

Having survived on zero following a dubious decision Tuesday, Abhimanyu also had his luck favouring him when Delhi pacer Subodh Bhati trapped him on line when he was on 41 but the Bengal opener got away with it this time too.

He was, however, was harsh on his bowlers and said: "I'm very disappointed. We have got ourselves to blame because of the way we bowled. Their run rate and the scores shows that we did not bowl well."

Besides injury to Khejroliya in the final session, Delhi also missed three of their key players -- pacer Navdeep Sahni and spinner leftarm spinner Vikas Mishra and No. 3 Dhruv Shorey.

"If Saini, Mishra and Shorey were fit, things would have been different," Manhas rued.

Delhi next face Tamil Nadu in Chennai in their final league match.

Manish Pandey led from the front with a sublime century to help Karnataka beat Chhattisgarh by a massive 198 runs in a Group A Ranji Trophy match at Alur.

The win took Karnataka a step closer towards securing their place in the knock-out stages of the premier domestic tournament.

Karnataka won three matches and drew as many in seven outings they played so far. They have lost just one against Saurashtra.

The newly appointed Karnataka skipper's knock was studded with 14 boundaries and a six.

After declaring their second innings at 219 for seven, Karnataka, who had made 418 all out in the first essay, skittled out Chhattisgarh for 156 in 57 overs.

Chhattisgarh had made 283 all out in their first innings, conceding 135 runs lead to the hosts.

Except for opener Avnish Dhaliwal (61) and Amandeep Khare (35) no other Chhattisgarh batsmen could make any significant contribution.

Seven batsmen failed to reach double figures as More and Gopal ran through Chhattisgarh's batting line-up in the second innings.

Resuming at the overnight score of 113 for four in their second innings, Karnataka lost Sheyas Gopal after he added just one run to his overnight 21.

Pandey then scripted a 43-run stand for the sixth wicket with Krishnappa Gowtham (20).

R Vinay Kumar, who scored a crucial 90 in the first innings, fell cheaply to Pankaj Rai for seven.

Pandey, who was ably supported by Mithun, declared the innings after reaching century.

Mithun made quick 33 runs off just 17 balls with the help of three boundaries and two sixes.

Andhra picked up three points after its Ranji Trophy Elite Group 'B' match against Hyderabad here Wednesday ended in a draw in Vizianagaram.

Resuming at 33 for no loss, Hyderabad lost opener Tanmay Agarwal (18), castled by B Ayyappa.

The other opener Tilar Verma (34) didn't last too long either as he was bowled by Shoaib Mohammed Khan to leave the visitors at 64 for 2.

Skipper Akshath Reddy and B Sandeep (45, 101 balls) got together for a 84-run stand for the third wicket.

Once their partnership was broken, Sandeep forged an important association with Agarwal to deny Andhra an opening.

Himalay held firm despite the loss of Sandeep and Ravi Teja (8) to steer Hyderabad to safety.

Play was called off before the commencement of the final hour with Hyderabad having erased the first innings defeat.

Andhra earned three points to take its tally to 11 from seven matches while Hyderabad is sixth in Group 'B' with 17. Madhya Pradesh is on top with 24 points followed by Himachal on 22, Bengal (22), Kerala and Punjab (both 20).

At Mohali, Punjab thrashed Kerala by 10 wickets and took their points tally to 20, thereby brightening their chances of qualifying for the quarterfinals.

Gujarat made a winning start to 2019 by defeating hosts Maharashtra by an innings and 130 runs in a Ranji Trophy Elite Group A game in Pune.

After bundling out Maharashtra for 230 in the first innings at the MCA international stadium at Gahunje near Pune, Gujarat piled up a mammoth 545/8 declared, thanks to centuries by skipper Priyank Panchal and opener Kathan Patel.

When the play began on the fouth and the final day, Maharashtra were teetering at 137 for 6 in their second innings, adrift by 178 runs.

Anupam Sanklecha showed resistance as he remained unbeaten on 40, but Gujarat bowlers removed the tail to hand their side a memorable win and additional point.

Gujarat grabbed 7 points from the win.

Milind, who scored 117 in the first innings, made 127 not out from 121 balls (20x4s, 1x6) in the second essay as Sikkim replied strongly, finishing at 304 four four to collect one point from the encounter.

This was Milind's sixth century, which included two double hundreds. He has so far made 1261 runs from 12 innings this season with an astonishing average of 126.10.

This is the fifth most by any batsman in a Ranji Trophy season. With one game left for Sikkim -- against Arunachal Pradesh -- Milind is 154 runs shy of VVS Laxman's all-time record of 1415 runs in 1999-2000 season.