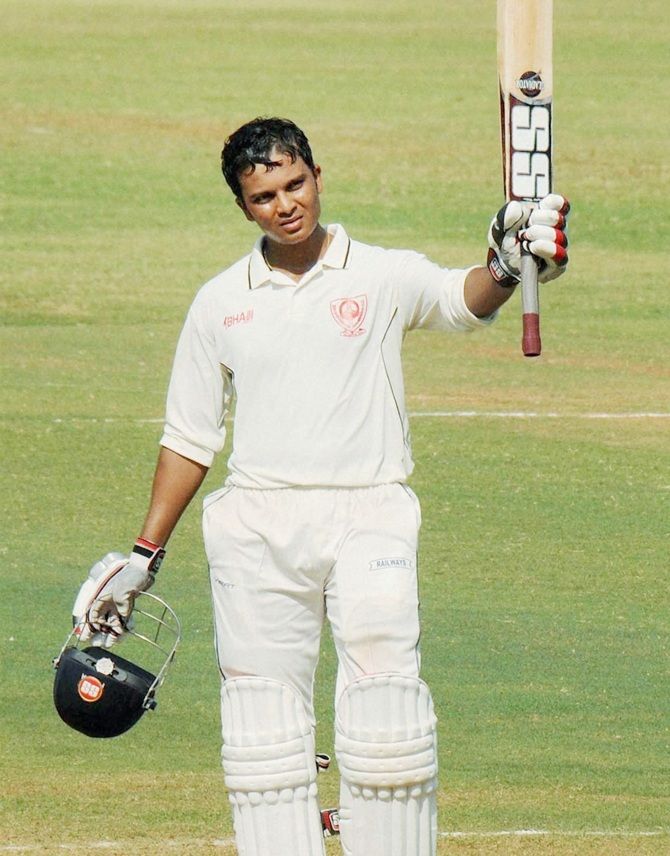 Baroda inflicted a massive innings and 116 runs defeat on Punjab on the back of an impressive pace bowling performance on the third day of their Ranji Trophy match at the Moti Bagh Stadium in Vadodara on Tuesday.

The home team's bowlers, led by India discards Irfan Pathan and Munaf Patel, took 17 Punjab wickets, after the visiting side was asked to follow-on, and wrapped up the match with a day to spare.

The pressure was piling on Punjab after they resumed the day on 112 for 3, in reply to Baroda’s first innings total of 475. They made a mess of their batting and were shot out for 212, conceding a 263-run lead.

Irfan added another wicket to his overnight two while Munaf got two more on Tuesday.

For Punjab, only Uday Kaul (58) could go past 50 while India discard Yuvraj Singh was the second highest scorer with a 116-ball 43.

Following on, Punjab did even worse in their second innings, all out for 147 in just 38.4 overs. They lost by a huge margin and handed Baroda a bonus point.

Irfan and Munaf shared the spoils again with three wickets each while Yusuf Pathan got two. Both Irfan and Munaf ended with six wickets apiece in the match.

Baroda secured seven points from the victory while Punjab none.

Mumbai: Opener Saurabh Wakaskar batted patiently to score an unbeaten century and lead Railways' fightback after they conceded a 114-run first innings lead to Mumbai on Day 3 of their Group B Ranji Trophy game.

The 24-year-old left-hand former Baroda batsman, who moved to Western Railway after getting a job as a clerk at the start of this season, batted for nearly the entire day to remain unbeaten on 161 off 260 balls and help Railways end the penultimate day on 285 for 1, an overall lead of 171 runs.

Wakaskar, whose career-best in 27 games so far is 172 for Baroda, was given splendid support by fellow-opener Ashish Singh (44) when Railways began their second innings after leg spinner Karn Sharma took out the last Mumbai wicket in the morning to finish with fine figures of 7 for 91.

Wakaskar and Ashish Singh put on 105 runs for the first wicket before the latter was trapped leg before by Mumbai left arm orthodox slow bowler Vishal Dabholkar.

The team went to lunch at 110 for 1 after Wakaskar, whose previous highest for the season was 93 against Gujarat, was joined by one-down Vairamudi Cheluvaraj, who remained unconquered at close with a sedate 70.

Wakaskar, who hit 15 fours and two sixes during his 351-minute stay, and the diminutive Cheluvaraj, who batted for six minutes under four hours, then denied Mumbai a wicket in last two sessions to give Railways an outside chance of forcing victory on Wednesday.

The second-wicket duo has put on 180 runs in 343 balls so far on the slow-paced wicket, in the process also exposing the frailty and lack of penetration of the home team's attack.

Mumbai took the new ball after 82 overs when the total was 269 for 1, but neither batsman was troubled.

In the morning, the hosts added just one run to their overnight total of 330 for 9, with Nikhil Patil remaining unbeaten on 83.

New Delhi: Services’ bowlers, led by Diwesh Pathania, bundled out Hyderabad for 272 to give their team a healthy 81-run first innings lead on the third and penultimate day of their Ranji Trophy Group C match.

At stumps, however, Services were themselves struggling at 77 for three, though they managed to extend their overall lead by 158 runs.

Replying to Services' first innings score of 353, Hyderabad, on Tuesday, resumed on 144 for no loss with openers Tanmay Agarwal, overnight 47, and Akshath Reddy, 89, completing their respective half-century and hundred each.

While Reddy hit a 261-ball 125, studded with 21 fours, Agarwal's 50 came off 184 deliveries. The duo also put on a crucial 151-run stand for the opening wicket to lay a solid platform for the visitors.

But the openers' dismissal triggered a collapse and the last six wickets fell for just 62 runs.

For Services, Pathania chipped in with figures of three for 63, while Raushan Raj (2-65) and Muzzaffaruddin Khalid (2-43) took two wickets each.

In their second essay, Hyderabad got off to a poor start, losing three early wickets.

Lahli: Odisha opened up the possibility of a bonus-point win after forcing Haryana to follow-on and take a big first-innings lead in their Group A Ranji match at the Bansi Lal stadium.

In reply to Odisha's mammoth first-innings total of 529 for six declared, Haryana were bowled out for 216.

Forced to follow-on, the hosts were 46 for one in their second innings when stumps were drawn on the third and penultimate day.

In their first innings, Saini top-scored for the hosts with 51 off 146 balls.

The opener was the only batsman to compile a half century. Jayant Yadav was the next-best scorer, with 46 off 100 balls. The others, such as Rishi Dewan, Sachin Rana and Priyank Tehlan, got starts but failed to carry on.

Haryana trail the visiting side by 267 runs with nine second-innings wickets remaining, and have the tough task of saving the match when play resumes on the final day.

Rajkot: Middle-order batsman Jaydev Shah hit an unbeaten 96 as Saurashtra scored 261 for 6 in their first innings on the third day of their Group C Ranji match against Himachal Pradesh at the Saurashtra Cricket Association Stadium.

After HP posted a mammoth first innings total of 551 on Monday, Saurashtra resumed their reply at 21 for no loss, with overnight openers Mohsin Dodia and Avi Barot.

Barot was the first to go to the second ball of the morning, was caught by Vasisht off Dhawan's bowling.

Sagar Jogiyani (10) tried to give company to Dodia but he was sent packing by Vasisht, wicketkeeper Bains taking the catch.

Dadia then joined hands with Shah and helped Saurashtra cross the 100-mark but they soon lost two quick wickets in the 44th and 45th overs to see the side slip to 107 for four.

While Bipul Sharma trapped Dodia in front of the wicket, Chauhan cleaned up Sheldon Jackson (1) in the next over.

Chirag Jani (56) and Shah then added 54 runs before the former was sent back to the hut by Vasisht, Gangta taking the catch.

New-man-in Deepak Punia then became a victim of Dhawan in the 93rd over.

The hosts scored 240 runs losing six wickets. They are still 290 runs behind HP with four wickets remaining in their first innings.

Shah (96) and Saurya Sanandiya (5) were at the crease when stumps were drawn.

Guwahati: Assam need 95 more runs to register their third consecutive victory, having scored 70 for three in pursuit of a 165-run target set by Delhi on the third and penultimate day of their Group A Ranji match.

After drawing with defending champions Karnataka, Assam beat former back-to-back winners Rajasthan by an innings, then toppled Haryana at home in Lahli and are now on the cusp of beating Delhi.

They still have seven wickets in hand to overhaul Delhi's target, with opener Rahul Hazarika batting on 30 in the company of AB Arun Karthik (13 not out), who scored vital 81 in the hosts' first innings.

But all the credit must go to Assam’s bowlers, who after wrapping Delhi for 149 in the first innings, bundled out the visitors for another below-par 172 in the second essay.

Resuming at the overnight score of 101 for four, Delhi’s last seven wickets contributed just 71 runs, with spin duo of Jamaluddin Syed Mohammad (3/49) and Amit Verma (3/42) inflicting the bulk of the damage.

Overnight batsmen Pulkit Narang (26 not out) and Milind Kumar (20) got starts but apart from them Delhi's middle and lower order struggled against the spin duo of Syed Mohammad and Verma.

Nagpur: Aditya Sarwate (50) scored a fine fifty before returning a four-wicket haul as Vidarbha posted 247 in their first innings and then reduced Rajasthan to 226 for nine on the penultimate day of their Group A Ranji Trophy match.

Resuming their first innings at 202 for 6, Vidarbha folded for 247 in 99.3 overs at the Vidarbha Cricket Association Ground.

Overnight batsman Sarwate (50) added eight runs to complete his fifty but then became a victim of Tanveer-Ul-Haq (4/60), while Ravi Jangid (36) too could not stay longer as he was dismissed after four overs by Tanveer with Menaria taking the catch.

Bhatia then moped up the tail, removing Umesh Yadav (10) and Akshay Wakhare (2).

Having conceded a first innings lead, Rajasthan made a watchful start to their second innings but soon Wakhare dismissed opener Pranay Sharma (14) and Sarwate then got rid of Puneet Yadav (8) as they slipped to 40 for two.

Vineet Saxena and Ashok Menaria (76) then joined hands and added 110 runs as the visitors reached 150. But just then skipper Maneria was dismissed by Jangid and Sarwate picked up the newman Rajat Bhatia (3) cheaply.

Jangid then dealt further blow, removing Saxena with Wasim Jaffer taking the catch as Rajasthan lost half their side and their way.

Sarwate then snapped Tanveer (9) and Nathu Singh (0) within a space for four balls.

At draw of stumps, K Ajay Singh (21) and Aniket Choudhary (2) were at the crease with Rajasthan leading by 195 runs with one wicket remaining.

Porvorim: S Sandeep Warrier returned a rich match-haul of nine wickets to help Kerala post an innings and 83 runs win over Goa and earn a bonus point on the penultimate day of their Ranji Trophy Group C match.

Kerala earned seven points from the victory and took their overall tally to 19 points from seven games.

In reply to Kerala's massive first innings total of 441, Goa resumed at 81 for two on Tuesday and immediately lost both their overnight batsmen.

Goa then kept losing wickets at regular intervals, Warrier wreaking havoc. He ended with figures of six for 44 as the hosts fell for 191, conceding a 258-run first innings lead.

Following on, Goa again succumbed to medium pacer Warrior, who took three for 31 in the second innings.

Goa finally were all out for 167 in the second essay with Warrier returning match figures of nine for 75.