A round-up of Day 3 of the Ranji Trophy matches: 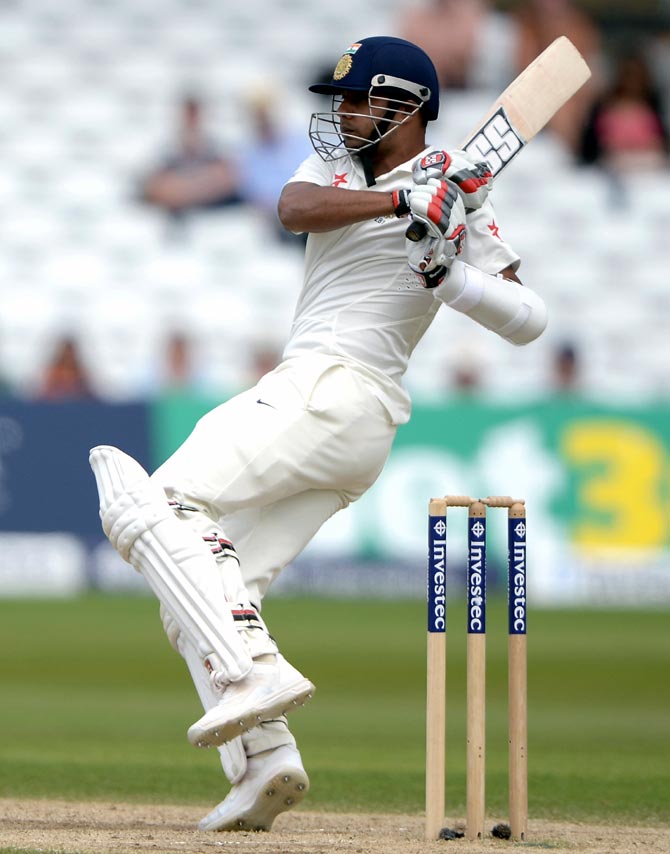 Mumbai: Stuart Binny, who has lost his place in the Indian Test and ODI teams, struck his ninth first class hundred -- a blistering 156 -- as Karnataka grabbed a huge first innings lead over Assam on day three of their Group B Ranji Trophy match on Saturday.

Trailing Karnataka by 245 runs on the first innings, Assam lost opener Rishav Das for 16 and were 48 for one in the second essay, behind by 197 runs overall, at draw of stumps.

Assam have an arduous task to avoid an outright loss on the fourth and final day at the MCA stadium in Bandra-Kurla complex in suburban Mumbai.

The star on the penultimate day of the game was all-rounder Binny who played a sparkling knock, laced with three sixes and 17 fours, to puncture Assam's slim hopes of coming back into the game.

Binny's century was the third in Karnataka's imposing first innings total of 570 and followed knocks of 128 by Robin Uthappa and 145 by captain Karun Nair who were not out last evening on 108 each in a team score of 223 for two.

Both fell before lunch after having added 265 runs for the third wicket, Syed Mohammed accounting for Uthappa, who faced 267 balls and struck 3 sixes and 12 fours, to end the big stand.

Krishna Das dismissed Nair on the 252nd ball that the batsman faced and his innings contained 17 hits to the fence.

Binny, who had missed a century against Jharkhand by three runs earlier in the season, then took centre-stage post lunch and strung another big partnership of 131 for the sixth wicket with wicket keeper C M Gautam who made 73 off 92 balls with ten fours.

Later, Binny - who was last out - and Shreyas Gopal, who made 35, added 95 runs for the seventh wicket.

For Assam, medium pacer Arup Das took four for 86, including the wicket of Binny, while his new ball partner Krishna Das claimed two for 95.

Coming to bat for the second time, Assam lost opener Rishav who was castled by leggie Shreyas Gopal.

New Delhi: Out-of-favour India all-rounder Yuvraj Singh slammed an unbeaten 179 and opener Manan Vohra remained not out on 201, as Punjab made a strong reply to post 452 for two in their Group A Ranji Trophy match against Baroda here today.

Baroda were all out for 529 in their first innings at the Feroz Shah Kotla.

Vohra scored his runs off 355 balls with the help of 17 boundaries and two sixes.

Skipper Yuvraj faced 253 balls and found the fence 23 times during his knock.

The Yuvraj-Vohra duo shared an unbroken partnership of 314 runs for the third wicket to help Punjab close in on Baroda's huge total.

The left-right combo scored runs at almost fours runs per over after joining forces at 138 for two in the 41st over.

At the close of play on the third and final day, Punjab trailed Baroda by 77 runs with eight wickets remaining in the 1st innings.

On the final day on Sunday, Punjab would look to take the first innings lead and collect three points from the game.

Dharamsala: A 134-run stand between opener Shivakant Shukla (83) and middle-order batsman Arindam Ghosh (51) brought Railways back in the match leaving them with 119 runs for victory against Bengal on what promises to be an exciting final day of the Ranji Trophy group A encounter

Needing 315 to win, Railways were 196 for 5 at stumps on the third day with danger-man Mahesh Rawat (23 batting) at the crease with skipper Karn Sharma (13 batting).

Bengal's chances also can't be entirely ruled out as they require only five wickets and the second new ball is only an over old. But with Karn and Mahesh both having a propensity to go for shots, the new ball can also get them quick runs.

Young medium pacer Sayan Ghosh (2-52 in 19 overs) removed the two set batsmen to bring Bengal back in the game.

Railways had recovered from the initial setbacks with another youngster Amit Kuila (3-42 in 22 overs) blowing away the top three within 22 runs.

Earlier, Bengal added only six runs to their overnight score of 208 for 9 as they ended their second innings at 214. Debutant Karan Thakur was the most successful bowler grabbing 4 for 45.

Mohali: Delhi produced a professional performance on the third day as they put Odisha on the mat with a 258-run first innings lead before claiming a few early wickets.

Milind's innings had eight fours and two sixes while Manan hit 10 fours and a six.

Skipper Gobind Poddar was unbeaten on 52 while Anurag Sarangi and Subhranshu Senapati were reoved by Vikas Tokas and Manan respectively.

With a day's play left, Odisha still are 149 runs in deficit with only six wickets in hand.

An innings win looks imminent for Delhi, who had two indifferent outings in the last two games against Maharashtra and Karnataka respectively.

Cuttack: Tamil Nadu reduced Madhya Pradesh to 261 for seven in their first innings despite a 160-run partnership on the third and penultimate day of their Group A Ranji Trophy match in Cuttack.

In reply to Tamil Nadu's 555 for seven declared in their first essay, Madhya Pradesh was struggling at the close of third day's play, needing 145 more to avoid the follow-on.

Resuming the day on 547 for seven, Tamil Nadu batted for just two overs and added eight runs before declaring the innings.

Tamil Nadu bowlers then wreaked havoc to reduce Madhya Pradesh to 82 for four before captain Devendra Bundela (93) and Saurabh Sharma (85) steadied the boat and took the team to 242 for four. The two put on a solid 160-run stand together for the fifth wicket.

However, a late burst from off-spinner Washington Sundar (2-20) to remove Bundela and Saurabh left Madhya Pradesh once again reeling at 249 for six.

They were two of the three wickets to fall in the last 15 overs of the day, which fetched only 19 runs.

Madhya Pradesh's misery was compounded further with Ankit Dane's (6) getting run-out off the last ball of the day.

Hyderabad: Maharashtra produced a collective bowling effort to reduce Rajasthan to 299 for eight and seize the initiative in a Group B Ranji Trophy match in Hyderabad.

Resuming at the overnight score of 76 for two in reply to Maharashtra's 461 all out, Rajasthan ended the day near the 300-run mark but still trail by 162 runs in the first innings with just two wickets in hand and just a day's play remaining in the four-day game.

Opener Manender Singh added 32 more runs to his overnight personal score before being dismissed at 63, while Siddharth Dobal made 59.

Besides, Ashok Maneria (42) and Mahipal Lomror (32) also got starts before being dismissed.

At stumps on the third and penultimate day, wicket-keeper Chetan Bist was batting on 43.

Wayanad: Opener Sanjay Ramaswamy struck his maiden first-class century as Vidarbha produced an improved batting effort to pile up 315 for three in their second innings against Jharkhand.

Ramaswamy made 102 off 203 balls with the help of 17 boundaries, while skipper Faiz Fazal hit 59 off 66 balls to stitch 93 runs for the opening stand after resuming at the overnight score of 49 for no loss.

Besides the duo, Gamesh Satish made 44 while Aditya Shanware (54 not out) and Ravi Jangid (50 not out) remained unbeaten at stumps on the third and penultimate day of the match.

Vidarbha had conceded the first innings lead to Jharkhand as they came up with a pathetic batting performance to be bundled out for 105.

In reply, Jharkhand declared their first innings at 362 for eight.

Haryana fight back after conceding lead

Mumbai: Haryana fought back after conceding the first innings lead to Andhra, reaching 138 for three while chasing 371 on the penultimate day of their Group C Ranji Trophy game at the Wankhede Stadium.

Young opener Shubham Rohilla kept Haryana in the hunt with an unbeaten 75, with seven hits to the fence, when play was stopped because of insufficient light.

Yuzvendra Chahal, who captured three wickets in the Andhra second innings with his leg spin, was the other not out batsman on 12.

Haryana, who conceded a lead of 150 in the first innings, did well on the field today as Chahal (3-51), captain Mohit Sharma (3-37) and Harshal Patel (2-33) played key roles in bundling Andhra out for 220 in the second innings.

Captain Hanuma Vihari (50) and Siva Kumar (42) were the main scorers in the Andhra second innings.

In the second innings Haryana, who were shot out for a paltry 103 in the first innings, were struggling at 48 for two when 18-year-old Rohtak-born Rohilla, playing in only his fifth first-class match, repaired the damage by stitching a stand of 61 for the third wicket with Rajat Paliwal (25).

Although Paliwal departed before close, Rohilla remained unbeaten after facing 137 balls to carry forward Haryana's attempt for a victory on the final day, on Sunday.

New Delhi: Hardik Patel (4-71) and Rush Kalaria (3-40) shared seven wickets between them to bundle out Uttar Pradesh for 241 and help Gujarat take a healthy 106-run first innings lead on the third day of their Ranji Trophy Group A match.

At stumps on day three, Gujarat reached 187 for five in their second innings to extend their overall lead to 293 runs at the Palam grounds in New Delhi.

Starting the day on 147 for four, UP lost overnight batsmen -- Eklavya Dwivedi (28) and Mohammad Saif (4) -- in consecutive overs within the opening hour. Saif took as many as 77 deliveries to score his four runs.

UP then lost another batsman in Saurabh Kumar (15) to be reeling at 173 for seven.

However, a crucial eight-wicket partnership of 62 between Kuldeep Yadav (25) and Imtiaz Ahmed (25) lifted the team to 241.

Thereafter a third-wicket stand of 53 between Bhargav Merai (36) and Manpreet Juneja (34 not out) took Gujarat to 187 for five at the close of play. 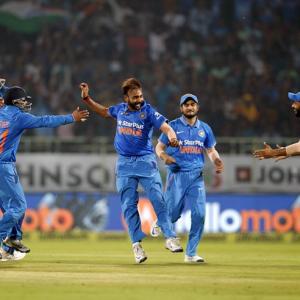 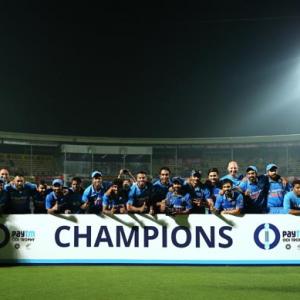