Ranji round-up: Karnataka bowled out for 200 by Saurashtra on Day 1

Table toppers Karnataka suffered a batting collapse as they were bowled out for 200 by Saurashtra on the opening day of their Ranji Trophy Group B cricket match in Patiala on Tuesday. 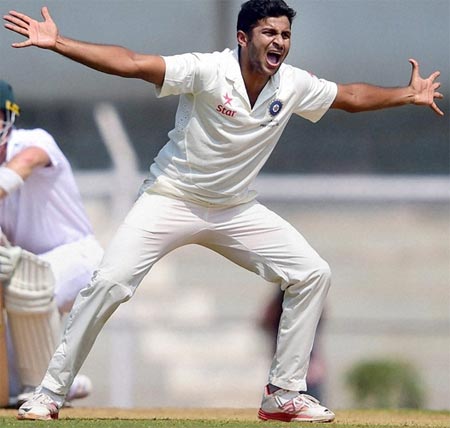 Electing to bat, Karnataka did not have any substantial partnership, the highest being the 54 for the eighth wicket between top scorer Manish Pandey (75) and Shreyas Gopal (38) as they were bowled out in 64.1 overs at Dhruve Pandove Stadium.

Pandey was the only top order Karnataka order batsman who got a substantial knock. His 75 came from 122 balls from which he hit seven fours and two sixes before he became the ninth batsman out.

Karnataka's first innings total revolved around Pandey who came two-down when the team score was 45/2.

Karnataka somewhat recovered later in the day, courtesy their captain Vinay Kumar to reduce Saurashtra, currently at the bottom of Group B, to 19 for 2 at stumps.

Snell Patel and Sheldon Jackson were at the crease for Saurashtra on 10 and 9 respectively when at close of play.

Nagpur:  Shardul Thakur's career-best spell in First Class cricket helped Mumbai bundle out Bengal for 99 runs on day one of the Ranji Trophy Group A match.

After bowling out Bengal in 35.3 overs, Mumbai made 164 for five taking a 65 run lead at stumps on the opening day.

While Thakur stood out with the ball, opener Kaustubh Pawar scored a solid 78 off 112 balls. Three quick wickets towards the end of the day gave Bengal something to cheer about.

Vizianagaram: Skipper Saurabh Tiwary (88) and Ishank Jaggi (80 not out) scored half-centuries each as Jharkhand reached 251 for four against Assam on the opening day of a Group B Ranji Trophy match.

Put in to bat by Assam, Jharkhand lost their top three batsmen below 100 runs before Tiwary and Jaggi steadied the boat.

Tiwary and Jaggi put on a solid 151-run stand together for the fourth wicket to take Jharkhand past 200-run mark.

But just before the close of play, Tiwary was dismissed for a well-made 88 off 174 deliveries that included seven hits to the fence and a six.

At stumps, Jaggi remained unbeaten and Rahul Shukla, who is yet to open his account, was giving him company.

Captains' day out in UP-Railways tie

Rajkot:  Uttar Pradesh captain Suresh Raina missed out on a century before Railway bowlers made a strong comeback to restrict Uttar Pradesh to 269 on day one of their Group A Ranji Trophy match.

After bowling out UP, Railways trail by 241 runs and were 18/1 at stumps.     Raina was the highest scorer for UP with 91 runs, hitting eight fours and a six before being caught and bowled by medium pacer Anureet Singh, while Saurabh Kumar scored 53.

Railways were not able to hold momentum losing opener Shivakant Shukla for just seven runs right before the end of the day's play.

Mumbai: A five-wicket haul by slow-left arm orthodox bowler Sumit Ruikar helped Chhattisgarh bundle out Services for a partly 225 on the opening day of their Ranji Trophy Group C encounter.

Electing to bat at the MCA's Bandra-Kurla Complex ground, Services, who lost to Hyderabad, had a terrible start with skipper and opener Aanshul Gupta getting out on 15 after being trapped leg before by Abhuday Kant Singh.

Ravi Chauhan (21) and Amit Pachhara (28) though got the start, they failed to convert their scores into big ones.

Notable contributions came only from stumper Nakul Verma (54 off 167 balls) and Vikas Hathwala (50 off 72 balls) -- both of whom scored contrasting half-centuries.

For Chhattisgarh, Ruikar was the pick of the bowlers with figures of five for 73 from 33.1 overs. Skipper Abhimanyu Chauhan bagged two wickets, while Pankaj Rao, Abhuday Kant Singh and Shivendra Singh took wicket apiece.

At stumps, Chhattisgarh were eight for no loss.