Ranji: Delhi made to chase leather as Ishan ton takes Jharkhand to 359/6 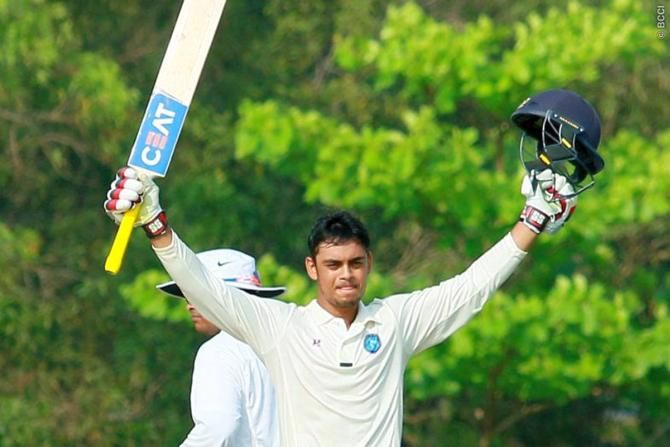 Delhi bowlers frittered away the initial advantage as Ishan Kishan's brilliant unbeaten 162 enabled Jharkhand to reach a comfortable 359 for six in a group B encounter of the Ranji Trophy, in  Thumba, Kerala, on Saturday.

It was a day when Delhi captain Unmukt Chand used as many as nine bowlers with only Vaibhav Rawal and wicketkeeper Rishabh Pant not rolling their arms over.

Left-handed Kishan played a counterattacking innings as he hit 14 boundaries and six huge sixes in his undefeated 213-ball knock.

The former India U-19 captain came in when Jharkhand were struggling at 80 for 4.

Along with experienced Ishank Jaggi (55), he added 116 runs for the fifth wicket. Jaggi played 89 balls hitting 10 fours in the process.

Once Jaggi was out, Kaushal Singh (39) gave support as he dropped anchor at one end in their 120-run stand in 28 overs for the 6th wicket with Kishan taking charge.

In fact, it was a forgettable day for Tokas, who went for 98 runs in 17 overs, as he was hit for sixes and fours galore. He was pulled with disdain as he dropped short on many occasion. He also bowled 8 no balls and two wides as it negated the efforts of Parvinder Awana (1/47 in 15 overs) and Subodh Bhati (2/53 in 19 overs).

"The bowlers started well but then bowled a lot of loose deliveries. We couldn't use our spinners effectively as they also didn't bowl to the channel. The absence of Navdeep Saini and Sumit Narwal also had a negative impact on the performance," said chief coach KP Bhaskar.

New Delhi: The smog cover in the capital caused cancellation of the first day's play in two Ranji Trophy games in the Capital on Saturday with players complaining of irritation in eyes and breathing problems.

The matches cancelled were group A league encounter between Bengal and Gujarat at the Feroz Shah Kotla and group C match at Karnail Singh Stadium between Tripura and Hyderabad.

While poor light has been a reason for play being called off, it's a rarity that players from both teams complain of burning eyes and breathing problem even when the light had considerably improved for an hour in the afternoon.

The post-Diwali smog, leading to low visibility and poor air quality, led to multiple inspections but health of the players was paramount for the match officials.

At Kotla, both Manoj Tiwary and Parthiv Patel went out for toss but match referee P Ranganathan along with umpires Virender Sharma and Krishnamachari Bharathan decided against it.

Bengal coach Sairaj Bahutule said: "The players were complaining that they were having burning sensation in their eyes. It's bad out there."

In fact Bengal bowling coach Ranadeb Bose was wearing a mask due to toxic air.

One of the DDCA officials told PTI: "The players also complained of breathing problems. If you stay out there for an hour, the air that you inhale will cause irreparable damage to the lungs."

The situation in Delhi is so bad that there is prediction of smog continuing and little cricket being played.

Bengal captain Manoj Tiwary said the players felt that they could not play amid such a dense smog even before the start of the game.

"This is the first time something like this happened in my career. You can't blame anyone. There is so much burning sensation in the eyes. After toss, umpires asked both me and Parthiv and we both decided that we can't play.

"During warm-up we felt that it's not happening. We have to take care of our health also. This is something unheard of. But we are all responsible because when we burst crackers we really think about environmental pollution," said Tiwary.

Match Referee P Ranganathan added: "This is something no one can do anything about. We have informed BCCI about the situation. It's difficult to shift matches."

Mysore: Opener Akhil Herwadkar missed out on a hundred by a whisker as Mumbai reached 244 for five at stumps on day one of their Ranji Trophy Group A match against Railways on Saturday.

Herwadkar batted for the better part of the day, anchoring the innings with other contributions coming from Shreyas Iyer (70) and Suryakumar Yadav, who remained unbeaten on 60.      Herwadkar hit 15 fours and a six before falling four runs of a third straight hundred in as many games.

The southpaw had struck 153 and 106 against Madhya Pradesh and Baroda respectively.

His good work then was carried forward by Yadav, who played a very patient knock.

Herwadkar's dismissal led to fall of two quick wickets -- Aditya Tare and Siddhesh Lad -- with leggie Karn Sharma doing the damage towards the end of the day.

Vadodara: Medium pacer Lalit Yadav picked up his maiden five wicket haul to help Vidarbha dismiss Karnataka for 267 on day one of their Ranji Trophy Group B match on Saturday.

Karnataka were reduced to 120 for seven before the lower order came to their rescue.

Number 10 K Gowtham remained unbeaten on 60 captain while the others who chipped in were skipper R Vinay Kumar (39), Robin Uthappa (46) and Sreenath Aravind (26).

For Vidarbha, Lalit was the stand out bowler while Ravikumar Thakur played the supporting role well by taking three wickets.

Karnataka were on put on the back foot right at the start as they lost both openers Ravikumar Samarth and Mayank Agarwal cheaply.

Uthappa alongside Manish Pandey tried to steady the innings and shared a 40-run stand.

However, Yadav broke Karnataka's backbone with timely strikes. In the end, they did well to cross the 250-run mark.

Vidarbha were 10 for no loss at stumps, having played three overs.

Yadav, Dwivedi steer UP to 300/6 against Punjab

Hyderabad: Kuldeep Yadav (62 not out) and wicketkeeper Eklavya Dwivedi (60) rescued Uttar Pradesh from a shaky 143 for five to take the team to 300 for six at the close of first day's play against Punjab in a Ranji Trophy Group A match.

At stumps, left-arm spinner Saurabh Kumar (39 not out) and left-arm chinaman bowler Kuldeep were at the crease.

Opting to bat, UP did not have an ideal start as they lost both their openers -- skipper Tanmay Srivastava (0) and Samarth Singh (12) -- cheaply, to be struggling at 31 for two.

Shubhek Gil (3/52) and Sandeep Sharma (2/68) managed to cause the early damage despite important contributions from Umang Sharma (49) and Rinku Singh (50).

However, Yadav and Dwivedi played patient and responsible knocks, and in the process pulled the team out of a jittery start by putting on a solid 99-run stand together for the sixth wicket.

The duo took UP to a relative safety of 298 for six before Dwivedi got out with a score of 60 that came off 77 balls, including seven boundaries and a six.

Yadav played 147 ball for his unbeaten 62, studded with three hits to the fence and two sixes.

Put in to bat, Chhattisgarh were five for one in the third over after the start was delayed by four and half hours because of a wet outfield due to Friday’s downpour.

Khare steadied the innings with Sahil Gupta (29) and completed his 50 in 78 balls, as the duo put together 76 before the opener was run out by Darshan Misal.

There was also an early finish as bad light stopped play after 38.3 overs with Khare batting on 58 (10x4), while skipper Mohammad Kaif was unbeaten on eight.

Goa suffered an injury scare when medium pacer, Felix Alemao lost his balance on his follow through in the fifth ball of his sixth over and had to be stretchered off the field.

Tamil Nadu bowl out Baroda for 93

Raipur: Krishnamoorthy Vignesh and Aswin Crist shared nine wickets between them as Tamil Nadu bundled out Baroda for 93 in their Group A Ranji Trophy cricket match on Saturday.

Vignesh was the most successful bowler for Tamil Nadu, returning impressive figures of 5/23, while Crist, also a medium paceer, picked up 4/39 after Baroda were sent into bat on day one of the match at Shaheed Veer Narayan Singh International Stadium.

By the end of day's play, Tamil Nadu progressed to 79 for 1 in 31 overs, trailing by only 14 runs with nine wickets remaining.

Mukund was batting on 40, while Baba Indrajith was unbeaten on 18, after the departure of opener Kaushik Gandhi for 11.

Earlier, only three Baroda batsmen could reach the double digits in a horrendous batting display, with opener Kedar Devdhar's 26 being the top score.

Baroda were 36/1 and then 71/2, when the dismissal of Dhiren Mistry (23) by Vignesh triggered a slide from which they could never recover.

Rajasthan reach 249/5 against Odisha on Day 1

Patiala: Rajasthan's middle-order put up a solid performance as the team reached 249/5 on the opening day of their Ranji Trophy Group B cricket match against Odisha on Saturday.

SF Khan top-scored for Rajasthan with an unbeaten 135-ball 65, that was laced with eight boundaries. Giving him company at the draw of stumps was Chetan Bist (20) after Rajasthan were put in to bat by Odisha.

Ashok Menaria was the second best with a 41-run effort, which came off 43 deliveries and included seven hits to the fence.

For Odisha, five different bowlers picked up the five wickets that fell on Saturday.

Ranchi: Jammu and Kashmir opener Shubham Khajuria waged a lone battle but Himachal Pradesh managed to bundle the team out for 162 and finish day one on 58 for two in their Ranji Trophy Group C fixture.

Electing to bat, Jammu and Kashmir lost their first wicket in the second over but 21-year-old Khajuria put on a steady show during his 48 (88b; 8x4) and tried to build small partnerships with other batsmen.

But none of the others could apply themselves and J&K lost seven wickets for 60 runs to fold in 65.2 overs.

In reply, Himachal Pradesh ended the day on 58 for 2 in 16 overs with Ankit Kalsi batting on 25 and Paras Dogra on three at the JSCA International Stadium Complex.

Khajuria, who's J&K's leading run-getter with 403 runs from four matches, looked solid even as wickets kept on falling at the other end.

The opener finally lost his calm and was the last to get out, becoming left-arm spinner's Mayank Dagar's fourth victim (4/33) in the 10th over after tea.

Khajuria had a partnership with Ian Dev Singh (18) but before they could stretch it beyond 50 Dagar opened his account.

In the post-lunch session, Puneet Bisht (18) was run out by Jaiswal while Samiullah Beigh's dismissal triggered the collapse.

Day 1 of Assam-Saurashtra abandoned due to rain

Kolkata: The first day's proceedings of the Ranji Trophy group B fixture between Assam and Saurashtra was called off due of persistent rains.

With a deep depression over Bay of Bengal, it's been raining in the city for last two days. The ground remained under covers and the first day's play was called off at 11am.

The weather pattern clearly indicates that day two may also be affected.