Captain R Vinay Kumar returned with an impressive nine-wicket haul in the match, including a fifer in the second innings, to guide Karnataka to a thumping 393 runs win over Rajasthan in Group B encounter of the Ranji Trophy cricket tournament, in Vizniagaram on Wednesday. 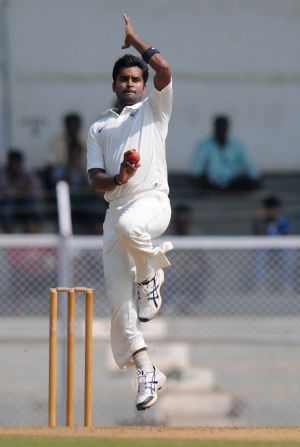 Vinay Kumar followed his exploits in the first innings with an even better show as he picked up five wickets for 54 runs in Rajasthan's second essay to help Karnataka pocket full six points from the game.

Chasing an imposing 525 runs for a win in the second innings, Rajasthan started the fourth and final day staring at a certain defeat as Karnataka bowlers needed to pick up just four wickets in three complete sessions to wrap up the issue.

And Karnataka duly achieved their goal as they took just four overs to bundle out Rajasthan for 131 and end their batsman's misery for the second consecutive time in the match.

Resuming at the overnight score of 118 for six, last four Rajasthan batsmen could add just 13 runs to their total.

Rajkot: Having conceded the first innings lead on the third, Bengal survived a top-order collapse before managing to end up with a point from their group A Ranji Trophy encounter against Tamil Nadu.

Tamil Nadu ended up with three points from the game by virtue of their slender first innings lead of 17 runs as they ended their first innings on 354 in reply to Bengal's 337.

Bengal in their second innings batted for 77 overs to reach 196 for 9 with Shreevats Goswami scoring 61 off 154 balls after they were reduced to 66 for five at one stage.

Left-hander Shreevats ensured that Bengal do not lose the match outright after the likes of Manoj Tiwary (7), Agniv Pan (0) and Sudeep Chatterjee (0) being dismissed cheaply.

Shreevats hit nine boundaries and a six in his innings.

Much of the credit should go to Thangarasu Natarajan (12 not out) and Krishnamoorthy Vignesh (34 no) for their 44-run stand for the last wicket.

While pacer Sayan Ghosh would be happy with his maiden five-for (5/123 in 36.1 overs), he should also take the blame for his wayward bowling at the end of the third evening that the last wicket pair raced to the lead.

When Bengal batted, Abhimanyu Easwaran (12) was caught by substitute Suryaprakash off Vignesh.

Sayan Sekhar Mondal (28) defended doggedly for 90 balls but saw his skipper Tiwary was again out caught and bowled this time to medium pacer Aswin Crist.

Left-hander Pan (0) could not repeat his impressive show in the first innings as he edged one to MS Washington Sundar in the slips off the bowling off Crist.

Shreevats joined Mondal as the dup added 36 runs for the fourth wicket before a straighter from off-break bowler Washington.

Bengal were down in the dumps at 66 for five when Washington removed first innings centurion Sudeep trying to cut and in the process being caught by glovesman Narayan Jagadeesan.

Effectively 49 for five with more than 50 overs left, Bengal were in real danger when former India U-19 Shreevats decided to curb his flamboyance.

He found an able ally in Amir Gani (45) as they added 87 runs and more importantly consume around two hours by the time Bengal's chances of what looked like an imminent defeat evaporated.

Once Gani was bowled by R Aushik Srinivas, Shreevats decided to down the shutter as he took bulk of the strike in the next 13 overs during which 15 runs were scored.

Once Shreevats was dismissed trying to cut Srinivas, Bengal were in a position of relative safety with 150 plus lead and very little time left for Tamil Nadu to chase.

The match was called off after the mandatory overs started.

Mysuru:  Slow left-arm orthodox bowlers Aditya Dhumal and Vishal Dabholar wrecked the opposition by claiming nine wickets between them to help Mumbai pull off a resounding 121 runs victory against Uttar Pradesh in a Ranji trophy match.

With this outright victory, Mumbai who are in Group A, garnered six points, taking their tally to 25 points, who are now proudly perched at the top of the point stable.

Mumbai pulled off their third outright victory of the season and drawing two in five matches they have played so far.

Uttar Pradesh are placed ninth after six matches, right at the bottom of the table, with four points after having lost four and drawing two matches respectively.

Mumbai had scored 233 all out in first innings and took a paltry eight runs lead over Uttar Pradesh after bowling the rivals all out for 225.

Batting for the second time, Mumbai scored 286 all out in the second innings, riding high on a brilliant 90 and late flourish by Suryakumar Yadav and Shardul.

Uttar Pradesh batsmen could not find any answer to magical spells of Aditya and Vishal.

Dhumal, who had picked up two wickets in the first innings, bagged five wickets in the second innings after conceding 53 runs in 20.2 overs, whereas Dabholkar claimed four wickets for 43 runs in 21 overs.

Shardul Thakur was the other bowler who scalped the prize wicket of Tanmay Srivastava before the close of third day's play.

Resuming Day 4 at 43 for one, overnight batsmen Shivam Chaudhary and Samarth Singh steadied the ship and strung a 81 runs partnership for the second wicket.

Choudhary, who scored 50 off 99 balls, became the first victim of Dhumal after he was stumped by Aditya Tare, when the score read 87 for two.

After the departure of Choudhary, no Uttar Pradesh batsmen made any contribution to make a match of it, but succumbed to sublime spin bowling by Dhumal and Dabholkar. They ran through the rival's innings by picking up eight last wickets for 86 runs.

Except Samarth, who made 42 runs, no other batsmen crossed 20 runs.

Patel led from the front to score 139 while opener Gohel struck a fine 104 before Gujarat declared their second innings at 324 for six. Gujarat had resumed their innings at 228 for two.

Set an improbable 375-run target, MP were off to a bad start losing four wickets for 36 runs.

Harpreet Singh and skipper Naman Ojha came to their team's rescue with a fighting 103 and 52 respectively. Harpreet remained unbeaten till the end with MP reaching 176 for five at close of play.

Hyderabad: Opener Rishav Das (69) struck a patient half-century and shared a 71-run stand with Sibsankar Roy (39) to lead Assam to a draw even as Odisha walked way with three points, courtesy their first innings lead.

In reply to Assam's 301, Odisha had scored 459 for seven declared to take a handsome 159-run lead in their Group B match at Rajiv Gandhi International Stadium.

Assam began their second innings on Wednesday and ended the day at 166 for four with das top scoring for them. He faced 222 balls in his innings before being trapped by off-spinner Govinda Poddar.

His second wicket partnership with Roy ensured that they will at least the save the match.

Mumbai: Hyderabad bowlers took as many as 11 wickets on the final day to ensure a 10-wicket victory over Services and earn bonus points from their Group C Ranji Trophy match.

Services were unable to add a run to their overnight score of 360 for nine as on the fifth ball of the day Raushan Raj was cleaned up by medium-pacer Mohammad Siraj.

Hyderabad gave follow-on to Services after they fell short by 220 runs to Hyderabad's first innings mammoth total of 580 for nine declared.

In their second innings at MCA's Bandra Kurla complex ground, Services were let down by their openers who struggled against the pace battery of Hyderabad.

Wicketkeeper-batsman Nakul Verma, in the third over of the innings, edged to keeper Kolla Sumanth off C V Milind on 4 with the score reading 8-1. In the same over, one down batsman

Ravi Chauhan (0) was caught by Bejamin Thomas in the slips.

Skipper Aanshul Gupta was then trapped leg before the wicket on 13.

Hyderabad sniffed victory as they kept taking regular wickets. At lunch, Services were 97 for three and needed to bat another couple of sessions to draw the match.

Services were bundled out for 239.