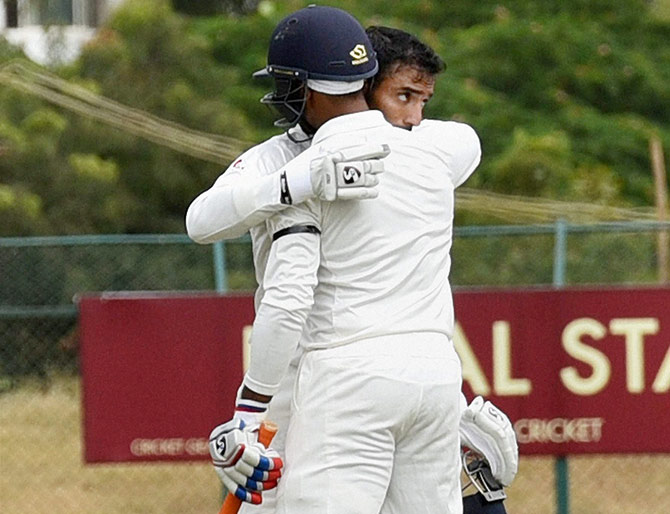 IMAGE: Karnataka'ss Robin Uthappa celebrates after completing his century during a Ranji trophy match against Delhi in Hubli. Photograph: PTI

Robin Uthappa flayed the Delhi bowlers with disdain, hitting part-time off-spinner Dhruv Shorey for 32 in a single over, as his third successive hundred guided Karnataka to a comfortable 358 for three against Delhi in the Ranji Trophy Group A league encounter, in Hubballi, on Monday.

Courtesy Uthappa's 141-ball-148, which had 16 boundaries and six maximums, and Mayank Agarwal's (118) maiden first-class hundred, the defending champions are in driver's seat at the end of the opening day.

The duo added 236 runs in a second wicket stand, with Agarwal hitting 19 boundaries off 209 balls.

When the stumps were drawn, Manish Pandey and Karun Nair were batting on 31 runs each, with help of four and two boundaries, respectively. They stitched an unbeaten 61-run stand for the fourth wicket.

Uthappa, who is riding high on form, hammered his third consecutive century after scores of 160 and 148 against Rajasthan and Odisha in the previous games.

Sent in to bat, Karnataka lost their first wicket, Ravikumar Samarth, at 47 when Pawan Suyal castled him with an incoming delivery.

Uthappa joined Agarwal and both scored runs at a quick pace of 3.43 runs per over and took Karnataka total to 120 for one at lunch.

Having struck a chord, Agarwal and Uthappa helped Karnataka cross 200 in 55.1 overs. They got their centuries after facing 175 and 122 balls respectively.

Just at the stroke of tea, Uthappa crushed Shorey for 32 runs in his very first over, smashing four huge sixes and taking his score from 102 to unbeaten 134 in a jiffy.

Malappuram: Saurashtra failed to capitalise on the bowling exploits of spinners Dharmendrasinh Jadeja and Vandit Jivrajani and slumped to 55 for six in their first innings in reply to Kerala's paltry 166 all out on the opening day of their Group C Ranji match.

Electing to bat, Kerala made a decent start, opener VA Jagadeesh (59 off 134 balls) striking a half century and along with Mohammed Azharuddeen putting on 52 runs for the opening stand.

Fabid Ahmed (25) was the other notable scorer for Kerala.

In response, Saurashtra had a horrendous outing with the bat as left-arm pacer KS Mohnish picked up four wickets for 27 runs to make life misery for the visitors.

Kalyani (WB): Opener Abhimanyu Easwaran stood tall amidst the ruins with a classy 88 as 20 wickets fell on the opening day of Bengal's penultimate Ranji Trophy league encounter against Odisha.

The frail-looking right-hander scored 88 runs in Bengal's meagre first innings score of 142 in 47.3 overs on a wicket which was distinctly under-prepared.

It showed when Odisha were bundled out for 107 in 29 overs with young off-spinner Aamir Gani picking up a career-best 6 for 34. He was well-supported by the left-arm spin duo of Pragyan Ojha (2-25) and debutant Anurag Tiwary (2-26).

With a small but important first innings lead of 35 runs, Bengal openers Easwaran (20 batting) and Sayan Sekhar Mondal (3 batting) added 23 runs in 9 overs in the second essay. The overall lead swelled to 58 runs as the match looks unlikely to last even three full days.

The highlight of the day certainly was young Easwaran, who scored 108 runs during the day on a track that the entire Odisha team managed a run less.

In his first innings, he nearly carried his bat through for the 156-ball effort that had 10 boundaries and a six. He was the last man out after adding an invaluable 46 runs for the final wicket with debutant Anurag (2).

Credit should be given to No 11 batsman Anurag for hanging in there for as long as 48 minutes.

Mumbai in trouble against MP on opening day

Indore: As many as 16 wickets fell on the opening day as Mumbai found themselves in a spot of bother at 74 for six in their first innings in reply to Madhya Pradesh's 240 all out in the Group B Ranji match.

Opting to bat after winning the toss, Madhya Pradesh were shot out for 240 in 75.1 overs as only Harpreet Singh (59) made a significant contribution.

In reply, Mumbai were reduced to 74 for six in 21 overs at stumps on the opening day.

Openers Jay Bista (27) and Akhil Herwadkar (17) got starts before being dismissed.

At the close of play, Nikhil Patil was unbeaten on 10 with Iqbal Abdulla yet to open his account.

Electing to bat at the JSCA International Stadium Complex, Jharkhand lost a couple of early wickets but a 154-run third-wicket partnership between Gautam (122) and Saurabh Tiwary (79) gave the opening day honours to the hosts.

No play on Day 1 of Assam-Maharashtra match

Pune: The first day's play in the Group A Ranji Trophy match between Assam and Maharashtra was called off without a ball being bowled owing to bad light.

Even the toss could not take place at the Maharashtra Cricket Association Stadium.

Hyderabad: Skipper Hanuma Vihari and Balchander Anirudh scored a half-century each to help Hyderabad amass 263 for two against Tripura on the opening day of their Ranji Trophy Group C match.

Openers Tanmay Agarwal (45) and Akshath Reddy (40) also chipped in with useful contributions after Hyderabad was put in to bat.

After the openers' dismissal, Vihari and Anirudh put on an unbeaten 151 runs for the third wicket to take the team to a commanding position.

At stumps, Vihari was unbeaten on 94 off 217 deliveries that included 10 fours and a six, while Anirudh was 75 not out off 127 balls, studded with eight boundaries and two sixes.

Tirunelveli: The first day's play in the Ranji match between Tamil Nadu and Gujarat was called off without a ball being bowled due to rain.

Even the toss was not held for the Group B match at the Indian Cement Company Ground.

Kanpur: Mayank Sidhana and Gitansh Khera struck gritty fifties to help Punjab recover from an early slump and reach 248 for eight at stumps on the opening day of their Group B Ranji encounter against Uttar Pradesh.

The UP medium-pacers rattled the Punjab top-order after inviting the visitors to bat at Green Park.

It was then that Sidhana (85) and Khera (73 not out) stitched a 138-run sixth-wicket partnership to give some respectability to the visitors' score.

But when Sidhana was out after a 141-ball stay at the crease, which was laced with 10 fours and a six, Punjab lost three more quick wickets.

Khera though has stood firm at one end only to be running out of partners.

Sharing the new ball with Praveen, Imtiaz Ahmed also chipped in with a wicket.

Both teams are battling hard to gain a quarter-final berth with a couple of league games left.

Jammu: Riding on a ton from Amogh Desai and unbeaten half-centuries by Swapnil Asnodkar and Sagun Kamat, Goa reached 263 for one against Jammu & Kashmir on the first day of their Group C Ranji match.

While Desai scored a 228-ball 106, studded with 13 boundaries, Asnodkar hit an unbeaten 74 off 151 deliveries that included seven fours and a six.

Even after Desai departed, Asnodkar and Kamat continued the good work and put the visitors in command.

At the close of play, Kamat had also completed his fifty and was unbeaten on 57.

The lone wicket of the day was taken by Parvez Rasool (1-85).

Rajasthan skittle out Haryana for 112

Lahli (Haryana): Skipper Pankaj Singh made a successful return to first-class cricket with a rich haul of 4 for 10 in only 14.2 overs as Rajasthan bowled out hosts Haryana for a paltry 112 in a Ranji Trophy Group A encounter.

The former India pacer, who last played for Rajasthan in April, was at his miserly best as only rival skipper Virender Sehwag (29) surpassed the 25-run mark. The others crossing the 20-run mark were the two Mohits -- Hooda and Sharma, who scored 22 and 23 respectively.

In reply, Rajasthan were comfortably placed at 75 for one, having batted at a time when the pitch had eased out.

Dogged opener Vineet Saxena was batting on 38 in the company of Puneet Yadav, who is on 12.

Earlier, in the morning, Pankaj called correctly and made full use of the help seamers get from the Chaudhary Bansi Lal Stadium track.