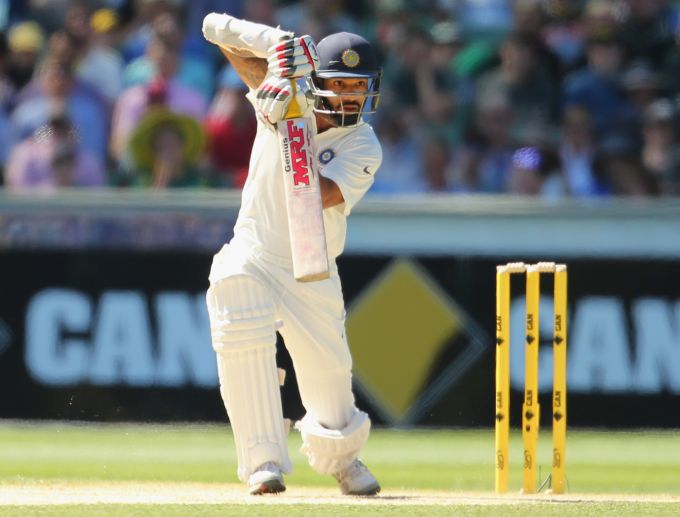 Delhi survived a mighty scare before their lower order, led by Nitish Rana and Sumit Narwal, saved the day with some gritty batting as they beat Rajasthan by two wickets in their Group B Ranji Trophy match in Wayanad on Thursday.

Resuming the final day on 51 for 3, needing 102 runs more to win, Delhi suffered a batting collapse but finally crossed the target of 153 with Rana (31) and Narwal (27 not out) playing some sensible cricket to take their side home at the Krishnagiri Stadium.

The day's start for Delhi was a horrible one with overnight batsman Vikas Tokas (10) being bowled by Pankaj Singh in the fifth over of the day with the addition of just five runs to his individual overnight score. The score was 62 for 4 at that stage.

The other overnight batsman, opener Shikhar Dhawan, on a comeback trail after recovering from a broken finger, was out three overs later on individual score of 49. He added 14 runs today and when he was out Delhi were tottering at 76 for 5, still needing another 77 for a win.

But Rana added 24 runs with Milind Kumar (10) and another 37 with Narwal, before being run out. Rana hit five fours in his 57-ball innings.

Narwal then batted with the tail to take Delhi to victory. He remained unbeaten on 27 from 38 balls from which he hit four boundaries, as Delhi reached 156 for 8 from 41.4 overs

Delhi secured all the six points for the win while Rajasthan got none.

Rajasthan's Amitkumar Gautam, playing his second first-class match, was adjudged Player of the Match. He scored 106 in the first innings to notch up his maiden first-class ton.

Delhi are now at fourth spot in the Group B table with 18 points from six matches. Only three teams from Group B will qualify for the knock-out stage.

Riding on Jasprit Bumrah's 6/71, Gujarat secured three points after managing to take a narrow first-innings lead in their Group A match against Mumbai.

After posting 432 in their first innings, Gujarat restricted Mumbai to 422 to take a crucial 15-run lead.

In their second essay on the fourth and final day, Gujarat were 82 for no loss in 45 overs at the KSCA Rajnagar Stadium.

Resuming on 328 for six, Mumbai lost Shreyas Iyer (194) for the addition of just three runs to his overnight score of 191, while Shubham Ranjane also got out quickly to leave the side struggling at 344 for eight.

However, Shardul Thakur steadied the ship with 56 off 89 balls and brought Mumbai closer to taking the first-innings lead before getting out to Jasprit Bumrah.

Thakur struck six boundaries and two sixes, while Iyer found the fence 18 times and cleared it twice during his 218-ball knock.

Bumrah was the most successful bowler for Gujarat, returning figures of 6/71.

First-innings double centurion for Gujarat, Priyank Kirit Panchal was unbeaten on 56 when the match was called off.

TN earn three points in a draw against Punjab

Tamil Nadu earned three points from their Group A match against Punjab on the basis of first innings lead in a game that ended in a tame draw on the final day.

Punjab had earlier conceded a 70-run first-innings lead, thanks to Kaushik Gandhi's career-best 164.

In the second innings, Punjab scored at 4.74 runs per over before declaring the innings at 375 for five.

Mandeep Singh hit a century, scoring 128 off 160 balls to anchor the innings. Uday Kaul (65) and skipper Gurkeerat Singh (55 off 45) also chipped in with important contributions, before Manpreet Gony hammered an unbeaten 66 off 26 balls that included eight sixes and three fours.

Chasing 306, Tamil Nadu reached 103 for one in 37 overs with Abhinav Mukund remaining unbeaten on 67 and Kaushik Gandhi on 21. The duo put on an unbroken 78 runs together for the second wicket.

Chidambaram Gautam (95) an Shreyas Gopal (77) hit resolute half-centuries before Krishnappa Gowtham dug his heels in as Karnataka lower-order batted superbly to eke out a draw against Odisha.

Karnataka were staring at a defeat when they started the day at a precarious 244 for six, just 81 ahead in their second innings, but eventually put on board 393.

Thanks to fighting knocks from Gautam, Gopal and Gowtham (46), they set Odisha a target of 231.

Odisha ended at 63 for no loss and walked away with three points thanks to their first innings lead.

The onus to save the match was on Gautam and Gopal and they delivered under pressure, putting on 69-run stand.

After Gautam was dismissed five runs short of his 11th first class hundred, Gowtham joined hands with Gopal and the two raised a crucial and match-saving 86-run partnership for the eighth wicket.

Vidarbha recorded their first win of the season as they defeated Saurashtra by eight wickets at the Karnail Singh Stadium.

Akshay Wakhare and Mohammad Shaikh picked up seven wickets between them as Saurashtra, who conceded a 46-run lead, were bowled out for 189, with opener Snell Patel top scoring with 63.

Vidarbha lost Faiz Fazal early in chase of 144, but were driven by half-centuries from Sanjay Ramaswamy and Ganesh Satish as they completed the chase in 35 overs.

The loss meant Saurashtra were rooted to the bottom of the group.

Captain Devendra Bundela smashed a career-best 188 while Shubham Sharma (119) hit his maiden first-class century as Madhya Pradesh took the first innings lead as well as three points from their drawn Group A match against Railways.

After resuming the final day at 356 for 5, MP declared their first innings on 510 for 8 in reply to Railways 371 to take the first innings lead at Feroze Shah Kotla.