A summary of Wednesday's play in the Ranji Trophy matches at various venues across the country. 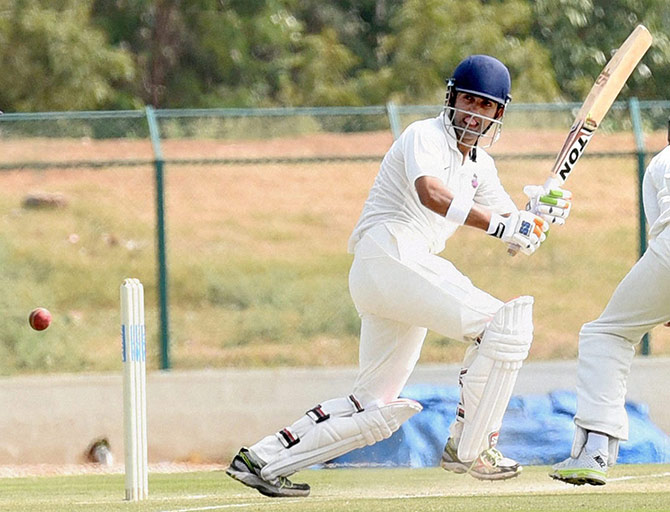 Iqbal Abdulla (39) and Shardul Thakur (38) held their nerve under intense pressure in an unbeaten 68-run stand lower down the order to guide Mumbai to a come-from-behind three-wicket victory over Madhya Pradesh, in the Group B Ranji Trophy match, in Indore, on Wednesday.

Chasing a tricky 280 for victory, Mumbai were staring down the barrel at 215 for seven when Abdulla and Thakur joined forces, but finished with 283 for seven with a day to spare.

The victory enabled them to take six points from the match.

It was a tremendous comeback by the visitors who had conceded a first innings lead of 78 runs.

Mumbai lost opener Akhil Herwadkar to the seventh ball of the day but the other opener, Jay Bista (74), and Shreyas Iyer (36) added 99 runs for the second wicket.

Things looked rosy for Mumbai before the match dramatically turned even with Mumbai losing wicket after wicket.

Mumbai skipper Aditya Tare (45) also played a good hand as his side had the last laugh in the end.

At stumps on the third day, the Gautam Gambhir-led led side was 22 for no loss after being forced to follow-on, having being bowled out for 301 in their first innings in reply to Karnataka's huge total of 542.

241 runs in arrears, skipper Gambhir (batting 13 batting) and Unmukt Chand (batting 3) are battling to earn at least get a point from the match, still needing 220 runs to avoid an innings defeat.

If Delhi lose, they are practically out of contention for a berth in the quarter-finals from Group A as they will finish their league engagements with 24 points from eight games.

If they manage a point and finish on 25 points, still they have very little chance of making it as it will depend on the equation of the last round matches.

Starting the day at 60 for one, the Delhi batsmen could never set the tempo during the 104.1 overs that they batted.

Skipper Gambhir top-scored with 75 off 151 balls that had 10 fours, but it was yet another patchy effort from the veteran India discard, who just about managed to survive.

When he managed to break the shackles, it was part-time off-breaks of Karun Nair who forced him into edging one to CM Gautham behind the stumps.

Earlier, talented Dhruv Shorey (16) padded a wrong one from Shreyash Gopal as Delhi lost wickets at one end.

Left-handers Nistish Rana (32) and Vaibhav Rawal (54) were out after getting set. In the lower order, Manan Sharma (56) hit 11 lusty boundaries en route his half-century but Delhi were never in serious contention of chasing down the mammoth first innings target set by the hosts.

The Karnataka bowlers hunted down Delhi as a team, with seamers HS Sharath (2-46), Sreenath Aravind (2-41) and Abhimanyu Mithun (2-52) sharing the spoils.

Leggie Gopal also chipped in with a couple of wickets while R Vinay Kumar and Karun took one each.

Kanpur: Contrasting fifties from Uday Kaul and Mandeep Singh helped Punjab end Day 3 on 244 for six and gain a massive second-innings lead against Uttar Pradesh in the Group B Ranji match.

After bundling out UP for 226 in response to their first innings score of 272 at Green Park, the Harbhajan Singh-led Punjab continued to dictate terms and extend the second innings lead to 290.

The visitors lost a couple of early wickets, but the 124-run third-wicket partnership between Uday (89 not out) and Mandeep (84) raised trouble for the Suresh Raina-led side.

If Kaul was patient in his 185-ball stay so far, Mandeep looked devastating during his 101-ball knock that was laced with 12 fours and a six.

Mandeep's wicket started a mini-collapse for the visitors, even though star batsman Yuvraj Singh struck a gritty 24, but the Harbajan Singh-led side had already got enough runs in its bag.

Earlier, starting the day on 208 for eight, the UP innings folded early with Umang Sharma remaining the top-scorer with 49 runs.

Lahli: Haryana have a tough task ahead to save their Ranji Trophy match against Rajasthan despite a valiant 146 from opener Nitin Saini in their second innings on day 3.

Two quick wickets, including Saini's, towards the end of day left Haryana at 287 for six and an uncomfortable lead of 120 runs.

The hosts were bowled out for 112 on Day 1 and the visitors replied with 279.

Haryana, resuming the day at 62 for no loss, put a better batting effort in the second innings though they haven’t yet bailed themselves out of trouble.

The star of the day was Saini, who played a patient 274 ball knock comprising 14 fours.

Priyank Tehlan and Mohit Hooda came up with handy contributions in the middle order.

Captain Virender Sehwag, who made 29 in the first innings, was dismissed for eight runs.

Pune: Assam’s bowlers, led by Krishna Das, pegged Maharashtra to 160 for six on the third day of their Group A Ranji encounter to keep their chances of qualifying for the knock-out rounds alive.

After Assam scored 298 in their first innings, in-form pacer Krishna took 4 for 58, leaving the hosts still needing 139 runs to get three points from the match.

If Assam can manage three from this game, their chances of making it to the quarter-finals stay alive as they will be on 25 points going into the last group league encounter against Bengal at home.

Starting the day at 223 for four, centurion KB Arun Karthik (130) and Gokul Sharma (76) added 162 runs for the fifth wicket stand before Assam lost their last six wickets for 45 runs.

Medium pacer Shrikant Mundhe (4-67) was the most successful bowler while Anupam Sanklecha, Dominic Mutthuswami and Samad Fallah got two wickets each.

In reply, Maharashtra lost three wickets for 60 runs, seamer Dhiraj Goswami accounting for two of them.

Save Rahul Tripathi (52) and, to some extent, Kedar Jadhav (36), none of the other batsmen showed stomach for survival.

New Delhi: Anureet Singh and Ashish Yadav took seven wickets between them as Railways dismissed Andhra Pradesh for 124 in their second innings to notch a 148-run victory in their Group B Ranji match.

The pace-spin duo of Anureet (4-32) and Ashish (3-36) wrecked havoc on the Andra batsmen after setting them a target of 273 on the penultimate day.

Resuming at 194 for eight, Railways' second innings folded for 204 in 69.2 overs after B Sudhakar and DB Prashanth dismissed overnight batsmen Ashish (62) and SS Mishra (12).

Anureet dealt the first blow when he trapped opener Prasanth (8) infront of wicket in the 8th over, before cleaning up Murumulla Sriram (2) in the 14th over.

Ashish then claimed the next three batsmen dismissing Bharat, A G Pradeep and Kaif as Andra lost their half their side in 33rd over at the score of 66.

Karn Sharma then got rid of Sudhakar (9), while Anureet returned to remove K Sreekanth (7) and D Siva Kumar (4). The next two batsmen fall prey to run-outs as Hebber was left stranded at the other end.

Hyderabad on course for bonus points against Tripura

Hyderabad: Hosts Hyderabad look good for seven points, including a bonus, after enforcing the follow-on on Tripura in the Group C Ranji Trophy encounter.

At stumps on the third day, Tripura were 25 for no loss in their second innings after being bowled out for 237 in the first essay, thereby conceding a huge lead of 211 runs.

Hyderabad had scored 548 in their first innings, riding on Hanuma Vihari’s 219.

Tripura still need 187 runs to make Hyderabad bat again and their efforts will largely depend on the performance of their outstation pros, Arindam Das and Parvinder singh.

Resuming at 43 for two, overnight batsmen Ian and Pranav Gupta put on 100 runs together for the third wicket.

Even after Pranav got out, Ian continued in the able company of veteran Mithun Manhas and the two shared a crucial 156-run stand for the fourth wicket to take the team past the 250-run mark.

At stumps, Manhas was unbeaten on 95. Giving him company was Aamir Aziz on 12.