West Indies, which was six points behind second-placed India's 128 points before the series, is now just one point adrift. 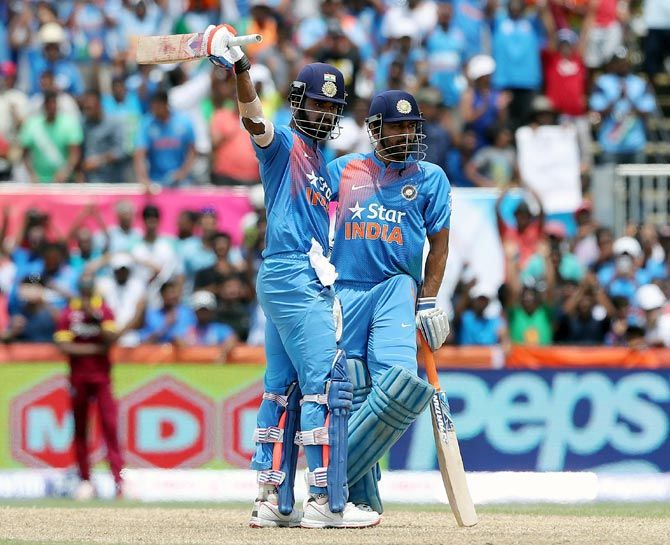 Rival openers Evin Lewis of the West Indies and India's Lokesh Rahul have made huge gains in the latest ICC Players Rankings for T20I Batsmen after slamming fine centuries in the recent two-match series in Lauderhill, USA, played on 27 and 28 August.

The West Indies, which won the series 1-0 with the thrilling one-run win in the first match, not only saw some of its batsmen improve their rankings significantly but the team has also narrowed the gap with India in the ICC T20I Team Rankings.

Two-time ICC World Twenty20 champion West Indies, which was six points behind second-placed India’s 128 points before the series, is now just one point adrift at 125 with India on 126. New Zealand leads the table with 132 points.

India's Rohit Sharma has moved up five places to reach 17th place following knocks of 62 and 10 not out, while Johnson Charles of the West Indies has vaulted 26 places to a career-best 23rd following innings of 79 and 43. In the ICC Player Rankings for T20I Bowlers, India’s Ravichandran Ashwin returned to the top five as he moved from seventh to fourth position. The off-spinner, who enjoyed a career-high rank of second in February and March this year, grabbed two for 11 in the second match.

Bhuvneshwar Kumar (67th) and Mohammad Shami (82nd) were the others to move up the bowlers' rankings for India.

Leg-spinner Amit Mishra, playing his first match since the ICC World Twenty20 in 2014, has re-entered the rankings at 104th position with three for 24 in the second match.

For the West Indies, Dwayne Bravo moved up five places to 33rd rank, all-rounder Kieron Pollard moved up seven places to 96th position and Brathwaite inched up from 127th rank to take the 119th slot.