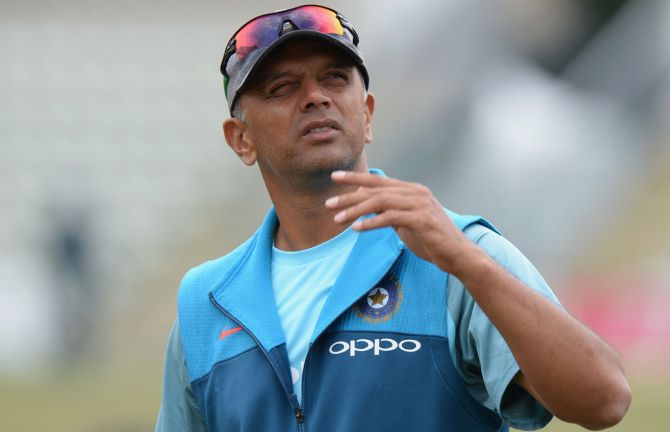 IMAGE: Rahul Dravid is all but certain to to be the Indian cricket team's next head coach. Photograph: Tony Marshall/Getty Images

Celebrated former captain Rahul Dravid is all but certain to to be the Indian cricket team's next head coach after he formally applied for the high-profile position on Tuesday.

With Dravid, the current head of National Cricket Academy applying, the job for the Cricket Advisory Committee becomes easier as there aren't any big names in fray who can match the batting great's stature.

Also, it is reliably learnt that he is the first and only choice of BCCI president Sourav Ganguly and secretary Jay Shah.

"Yes, Rahul has formally applied today as it's the last day of the deadline. His team at the NCA, bowling coach Paras (Mhambrey) and fielding coach Abhay (Sharma) have already applied. His application was just a formality," a senior BCCI official said on Tuesday.

Dravid had recently met the BCCI brass in Dubai on the sidelines of the IPL final between Kolkata Knight Riders and Chennai Super Kings where Ganguly and Shah spoke to him about taking up the position once Ravi Shastri steps down at the end of India's campaign in the ICC T20 World Cup.

Under Dravid, a new era in Indian cricket will start with the home series against New Zealand where he will take charge with a new T20 captain, which in all likelihood, will be Rohit Sharma.

Laxman in fray for NCA; Kumble could be sounded out

Former India batting great VVS Laxman could again be back in the fray to head the National Cricket Academy in case the post falls vacant in the coming days.

It is learnt from sources that Laxman might not continue as the mentor of IPL side Sunrisers Hyderbad and in case, he is selected, he would also have to leave his media commitments including commentary and writing columns.

The national coach and the NCA head are expected to work in close coordination keeping the interests of Indian cricket in mind.

It is understood that Dravid and Laxman, who have had a close bond since the time they played for South Zone and subsequently for India for close to a decade and half, would be the perfect choice.

The other aspect that needs to be chalked out is the fact that Laxman is a resident of Hyderabad, where he has a young family with children just in their teens and also old parents.

Laxman, it is learnt, was reluctant to take up NCA Director of Cricket offer but BCCI would once again be approaching him.

In case he again turns dow the offer, they would have to look for other options. Anil Kumble is another big name but it remains to be seen whether the BCCI would approach the former India captain.

The NCA role worked well for Dravid as he is a Bengaluru resident.

In case of Laxman, if he has to stay in Bengaluru for a minimum of 200 days a year, it is like temporarily shifting base and his remuneration also needs to be chalked out.