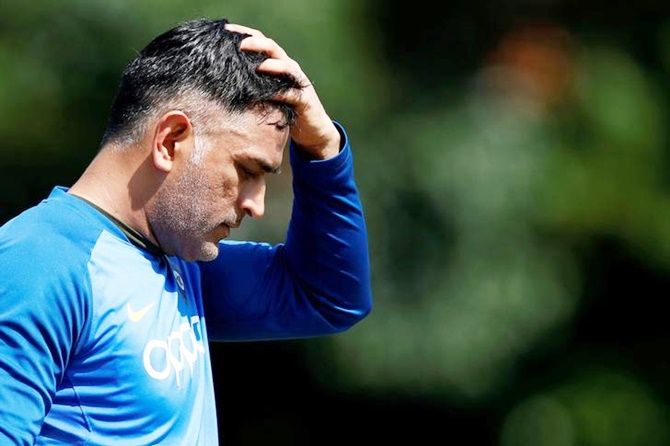 IMAGE: Mahendra Singh Dhoni scored 42 off 31 balls in Sunday’s World Cup game against England but was criticised for not going for big shots in the end overs. Photograph: Andrew Boyers /Reuters

Former India cricketer and broadcaster Sanjay Manjrekar finds it "really unfair" that the critics' focus is on Mahendra Singh Dhoni's strike-rate at this stage of his career when younger players like K L Rahul should be held more accountable.

Dhoni scored 42 off 31 balls against England and while Manjrekar found it a bit surprising that the former India captain didn't go for big shots in the end, he feels others need to be hauled up too.

"It is really unfair that the focus is only on Dhoni because, if, at this stage of his career also, there aren't other batsmen around who can help India win matches, then it is not healthy (sign) for Indian cricket," Manjrekar said during an interaction on the eve of the Bangladesh game.

Manjrekar feels it's time for Rahul to convert those starts and do justice to his potential.

"Focus shouldn't be so much on Dhoni and it's more a media thing, to talk about Dhoni. If I am a well-wisher of Indian cricket, I will start putting pressure on Lokesh Rahul and others to start delivering and take the load away from people like Dhoni," said the Mumbaikar, who played 37 Tests for India.

However, Manjrekar feels that Dhoni should at least try to score a run-a-ball at the beginning of his innings if he is coming to bat after 20-25 overs.

"I just loved it when Dhoni went in to bat in the warm-up matches and got 30 runs off 30 balls and the late flourish came. So I would like the team management to tell him to get a run-a-ball start and see how it goes.

A big fan of Mayank Agarwal's batting, Manjrekar is delighted for the Karnataka opener.

"With due respect to Vijay Shankar and it is very unfortunate that he got injured, I am delighted that Mayank Agarwal is in the team.

"I think Mayank is a class player and he made his Test debut in Australia and is a very good addition to the squad. In England, the approach to ODIs is closer to Test cricket," he added.