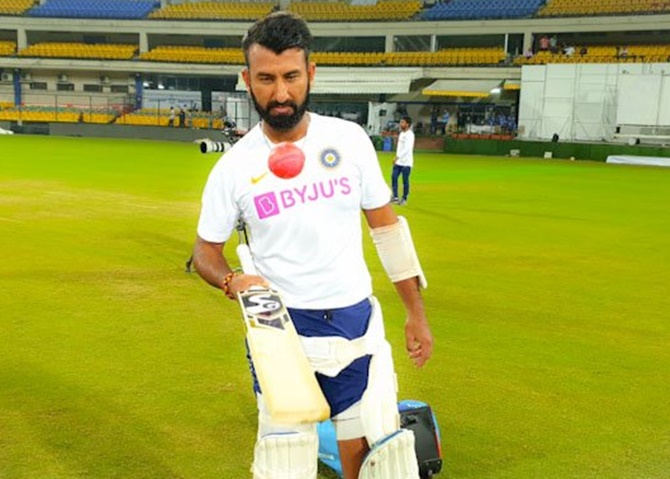 IMAGE: Pujara shared a picture of him practising with a pink ball under lights. Photograph: Cheteshwar Pujara/Twitter

Ahead of India's first day and night Test match, batsman Cheteshwar Pujara is finding it difficult to keep his eyes away from the pink ball.

Pujara took to Twitter and shared a picture of him practising with a pink ball under lights and captioned the post as: "All eyes on the #PinkBall now!"

The 31-year-old played a knock of 54 runs in the first Test against Bangladesh, which India won by an innings and 130 runs on Saturday.

Indian players are gearing up themselves at the Holkar Cricket Stadium for the pink ball Test match against Bangladesh.

The ongoing Test series between India and Bangladesh is part of the ICC World Test Championship (WTC). India strengthened its position in WTC standings by reaching 300 points.

They are yet to concede a point, having gained a full 120 points each in their three-Test home series against South Africa and two-Test series in the West Indies.

India and Bangladesh will play their next Test under lights at the Eden Gardens in Kolkata from November 22-26.