'There is going to be a big tag on his head, because of Sachin, but luckily he is a bowler, not a batsman, so I think, Sachin will be very proud, if he could bowl like Arjun' 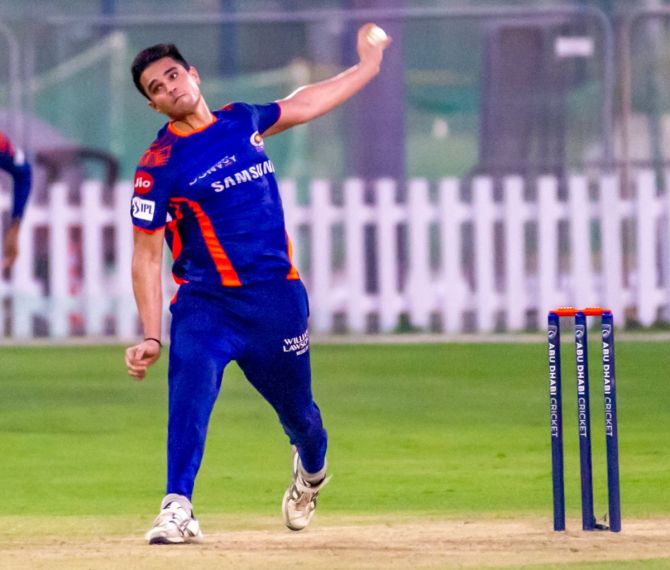 IMAGE: Arjun Tendulkar has in the past trained with Mumbai Indians. Photograph: BCCI/IPL

Five-time IPL champions Mumbai Indians had the last buy of the day as they paid the base price amount of Rs 20 lakh to get Arjun Tendulkar on board on Thursday.

"We have looked at it purely on a skills-basis, I mean, there is going to be a big tag on his head, because of Sachin, but luckily he is a bowler, not a batsman, so I think, Sachin will be very proud, if he could bowl like Arjun," Jayawardane said at a virtual press conference held after the auction.

"So, I think it is going to be learning process for Arjun, he just started playing for Mumbai and now with the franchise, so he will learn the ropes, he will evolve, he is still young but a very focussed young man, so you have to give him sometime and hopefully not put lot of pressure on him either."

"...just let him evolve as he evolves around and work his way up, that is what we are there to help him to do,” added the Sri Lankan legend.

Mumbai Indians' Director of Cricket Operations, Zaheer Khan said that left-arm paceman, who can wield the willow was keen on learning and was a hard-working kid.

"As far as I am concerned, yes, I have spent a lot of time with him in the nets, working alongside him, trying to teach him few tricks of the trade and that has been going well.

"And look the added pressure of the name Sachin Tendulkar is always going to be there on him and something which he will have to live by, but we are very hopeful that environment, which we have around the team is definitely going to help them," said Zaheer.

“…Arjun has a beautiful skill-set, he is left-arm fast bowler and can bat left-arm, there are not many of those in world cricket, but it is very important that his process and progression happens as any other young cricketer's progressions happens."

"...Fortunately at MI, we help individuals reach their potential, it is all on their hard-work, but we believe we have the environment to do that, and hopefully we can see Arjun reach his potential in the coming years," said Ambani.

He came up through the ranks after playing age-group cricket tournaments and has also featured in the T20 Mumbai League.

Previously, Arjun has also been seen bowling to the Indian national team in the nets. He represented the India U-19 team, when it had toured Sri Lanka in the past.