Defending champions Mumbai Indians finally snapped their losing streak on the back of a collective batting effort as they defeated Kings XI Punjab by five wickets in the Indian Premier League, in Mumbai on Saturday.

Kieron Pollard smashed Sandeep Sharma for a six over long-off in the final over as Mumbai surged past Punjab's score of 168 for 5 by scoring 170 for five with five deliveries to spare. 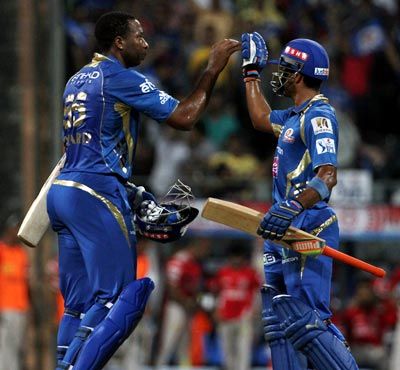 Pollard remained unconquered on 28 off 12 balls and put on 44 runs in only 15 balls for the unfinished sixth wicket with Aditya Tare (16 off 6 balls) at the Wankhede Stadium.

Prior to their quick-fire partnership, Mumbai were put on the victory path by significant contributions from opener CM Gautam (33), skipper Rohit Sharma (39) and Corey Anderson (35).

The dismissal of Sharma and Anderson in successive overs brought Punjab back into the game but Pollard and Tare shattered their hopes.

It was Mumbai's first win in six games. It was also their their first game at home in this edition and they have now extended their winning run at this venue to nine since the last edition.

It was Punjab's first defeat after a glorious winning streak of five out of five in the first leg of the IPL, which was held in the United Arab Emirates.

Mumbai’s run-chase started on a none-too-promising note when they lost opener Ben Dunk in the fifth ball of the first over of the innings and also Ambati Rayudu soon after to be reduced to 33 for two.

Dunk was caught brilliantly by a diving Wriddhiman Saha behind the wicket off by Sandeep Sharma who also accounted for Rayudu by trapping the batsman in front with a ball that moved in sharply and also kept a bit low.

Gautam, promoted in the order in yet another new opening combination for the title holders, and Rohit Sharma then repaired the innings with a stand of 47.

Mumbai were 49 for two in six overs at the end of the Powerplay and then advanced to 70 for 3 following the exit of Gautam who was dismissed by Rishi Dhawan.

New batsman Anderson smashed a six off Dhawan over long on to make a good start. The left hander from New Zealand, whose highest score has been 39 batting at no. 3 against Chennai Super Kings, then hit left-arm spinner Akshar Patel for three fours and a six in the next – the 13th – to swing the game in Mumbai's favour. Patel conceded 20 runs in that his last over for expensive figures of 0 for 40.

With the 100 coming up in the 13th over, Mumbai looked slightly ahead. The breezy fourth-wicket partnership between Rohit and Anderson added 53 runs in 35 balls before the former was dismissed by Laxmipathy Balaji, caught behind mistiming a flick, to end the stand and left Mumbai with the task of scoring 46 runs in 27 balls.

The hosts were dealt another blow when the well-set Anderson spooned a drive to long off fielder David Miller off Rishi Dhawan in the next over, leaving Kieron Pollard to win the game for them.

However, it was Tare who gave the impetus as he smashed Balaji for a four and a six over in the 18th over. Pollard then plundered 20 runs in the penultimate over from Mitchell Johnson to turn the game in Mumbai's favour.

Earlier, wicketkeeper Wriddhiman Saha cracked his maiden half-century of the season to help Punjab compile a challenging 168 for five in their 20 overs.

Saha started slowly but gained confidence in the company of the in-form Glenn Maxwell, who slammed a quick-fire 45 in 27 balls, to remain unconquered on 59 in 47 balls.

Saha, who struck three sixes and four boundaries, and Maxwell resurrected the visitors' innings after the the high-flying Kings XI lost both their openers Virender Sehwag and Cheteshwar Pujara within the first six overs of Powerplay.

First to depart was Sehwag (1), who was brilliantly run out at the non-striker's end by a smart throw from home team captain Rohit Sharma.

Pujara was looking good for a big score, exhibiting some classy cover drives off the pace bowlers before he chased a wide ball by left arm Corey Anderson and edged to keeper C M Gautam for 19.

The innings was then propped up by a 69-run partnership between Maxwell and Saha with the former easily outscoring the wicketkeeper with some attacking shots.

Maxwell, who came into the game after scoring two 90-plus scores and an innings of 89, started off in his usual aggressive fashion.

The Tasmanian showed his intent against Malinga, pulling the Sri Lankan's short ball nonchalantly over the mid wicket region for his first six. Another boundary enabled Punjab to reach 70 at the end of the 10th over after they were pegged down to 36 for 2 at the end of six overs.

Maxwell picked Harbhajan Singh for some rough treatment, stepping out and lofting the off spinner for his second six over long on.

Saha too slog-swept the bowler for a six before Harbhajan exacted revenge by removing Maxwell through a skied catch to long on in the same over.

Saha and Kings XI captain George Bailey then added 37 runs in 24 balls for the fourth wicket before Harbhajan accounted for the latter through a catch at deep square leg to finish with an impressive 2 for 34.

Malinga returned figures of 1 for 25. The other wicket taker was left-arm pacer Anderson.

Mumbai suffered a blow when Zaheer Khan left the field after failing to complete his fourth over, clutching his left arm pit in the follow through.

Mumbai made one change in the team that lost their previous game to Sunrisers Hyderabad, bringing in Gujarat medium pacer Jasprit Bumrah for left-arm spinner Pragyan Ojha, while Punjab retained their winning combination. IPL PHOTOS: Pollard's knock in vain as Hyderabad down Mumbai 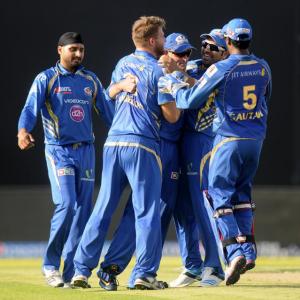 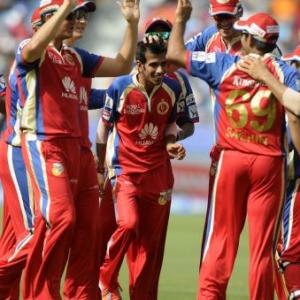 RCB, Sunrisers look to get back to winning ways