Players give thumbs down to neutral venues in Ranji Trophy

'What is the point of having matches in places where nobody comes to see us play?' 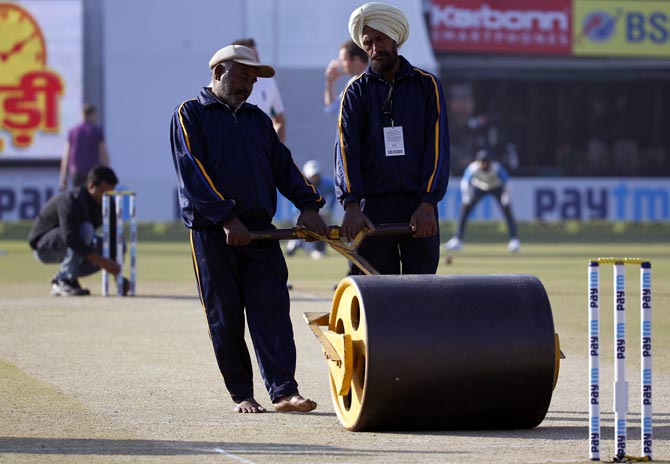 The Board of Control for Cricket in India's move to have Ranji Trophy matches at neutral venues failed miserably in its first attempt, according to leading domestic players who say the idea did not work due to apathy of the host associations and poor planning.

The BCCI had introduced the concept to make the tournament more competitive by negating the home advantage that teams earlier used to exploit and exposing the players to different conditions.

"The idea was good but the implementation was third class. Most host associations did not show interest in organising matches for other teams. The facilities were poor, be it providing us with good wickets, adequate balls or serving decent food. It could have been handled much better," domestic cricket veteran Rajat Bhatia said on Tuesday.

The Delhi-based cricketer has played for three states and is currently with Rajasthan.

Bhatia, who played only four matches this season owing to family issues, was simply scathing in his criticism.

"The system was introduced to stop teams from taking undue home advantage with games often finishing inside two days. But the quality did not improve even though games were held at neutral venues.

"Take our match against Assam in Vizag for example. The wicket was not fit enough for a first class match and therefore the match was over well inside three days. And it was just two weeks before an international match. The groundsmen did not have much to say when we asked them why we were made to play on such a poor surface," the 37-year-old said.

Pacers dominated in that match with Pankaj Singh taking a nine-wicket haul and Rajasthan winning the game by an innings and eight runs.

Another issue for the players was scheduling of the games as they had to travel to remote areas of the country with limited time in hand.

"Scheduling was a big problem. Sometimes there was just a three-day gap between games and we had to travel to places which were not easily accessible, which meant we had to spend a lot of time on the road in buses," said Gujarat and India spinner Axar Patel.

Lack of interest for the games was another reason why Axar did not like the neutral venue initiative.

"What is the point of having matches in places where nobody comes to see us play? At least we had a decent turnout when we were playing at home. I hope we go back to the home and away format next season," said the left-arm spinner, who is out of action with a wrist injury.

After the end of Ranji Trophy, it is not clear whether the BCCI achieved its objective of having more result-oriented matches on sporting wickets. While some matches got over well inside three days, there were games that saw batsmen ruling the roost on placid tracks.

By the end of the group stages, the result percentage was down by two percent corresponding to the previous season.

Another senior player who slammed the concept is Tamil Nadu opener Abhinav Mukund, who was particularly critical of the nature of wickets provided.

"No one actually gives a damn about the wickets that are being prepared. Everyone's playing safe, which is why people are scoring more than 1000 runs, and I don't see many spinners coming into play.

"I don't like this concept mainly because of the fact that there's no continuity. You play throughout the year in one condition ­ it's really important to play at home," he had said during the tournament.

Looking ahead, the BCCI can still persist with neutral venues provided the execution is better, said Bhatia.

"I think it was a very good idea especially after you had introduced pink-ball cricket in Duleep Trophy. It was held at a neutral venue (in Greater Noida) but crowd turned up. The BCCI could have done the same with Ranji Trophy. You got to promote it the right way, otherwise there is little point in doing something new," added Bhatia.

Image: The groundstaff work on the pitch.

Source: PTI© Copyright 2020 PTI. All rights reserved. Republication or redistribution of PTI content, including by framing or similar means, is expressly prohibited without the prior written consent.
Related News: BCCI, Ranji Trophy, Rajat Bhatia, The Board of Control for Cricket, Axar
SHARE THIS STORYCOMMENT
Print this article