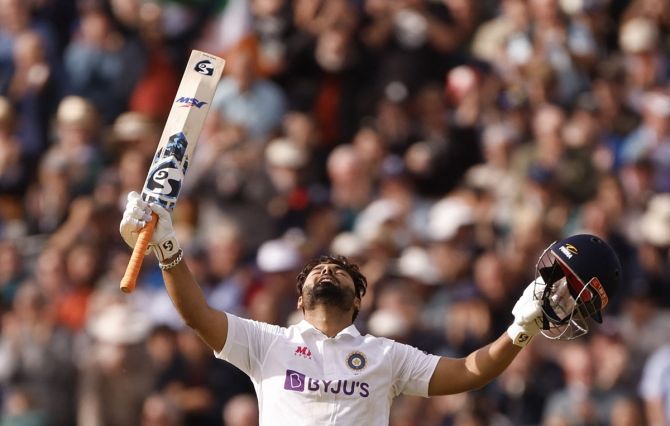 Swashbuckling batter Rishabh Pant scored a brilliant hundred to put India in a strong position, at 338 for 7, at stumps on Day 1 in the rescheduled fifth Test against England at Edgbaston on Friday.

With India tottering on 98 for 5 he showed that he loves playing against England by registering his third century against them, his second in their backyard.

The wicketkeeper-batter made his Test debut against England at Trent Bridge in Nottingham in 2018 and got off the mark in the longest format of the game with a towering six. He went on to slam his maiden Test century against them a match later at the Oval, in London, scoring 114, in the same series.

His only Test ton on Indian soil was also against England, at the Narendra Modi Stadium in Ahmedabad in 2021. 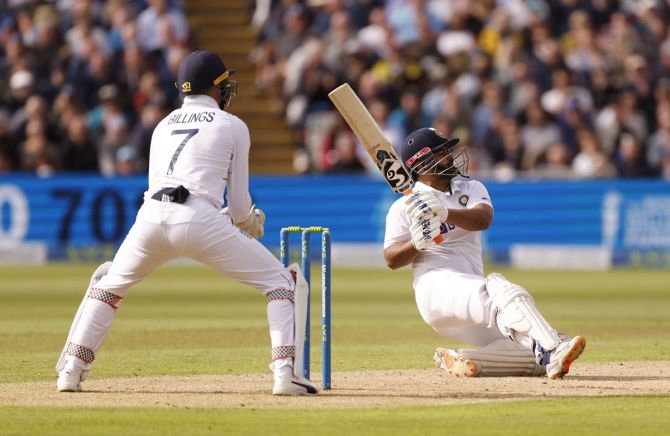 IMAGE: Rishabh Pant loses his balance but does well to connect and send the ball to the boundary. Photograph: Jason Cairnduff/Reuters

On Friday, in Birmingham, the 24-year-old walked out to bat at 64 for 3, after Hanuma Vihari was dismissed leg before wicket for 20 by pacer Matthew Potts.

From the other end, he saw the likes of Virat Kohli and Shreyas Iyer bite the dust after scores of 11 and 15 respectively as India’s batters had no answer to the English bowlers' swing, movement and guile.

Despite the procession at the other end and English bowlers having their tails up, Pant played his natural game and attacked whenever he got the ball in his arc. Giving him company at the other end was Ravindra Jadeja, who held one end tight and did not allow the wickets to fall at the other end. 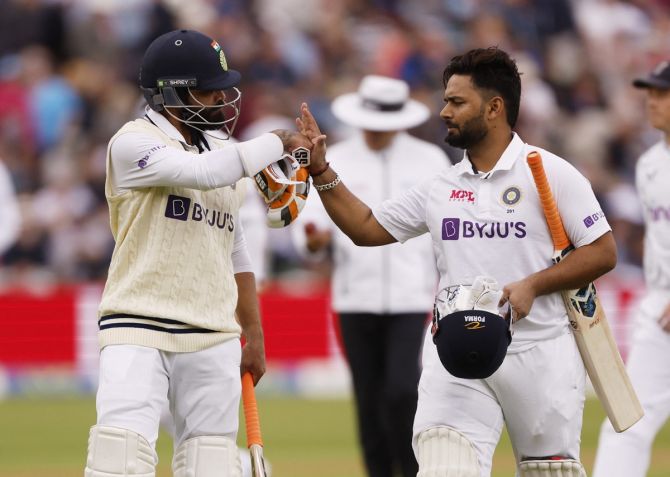 IMAGE: Rishabh Pant and Ravindra Jadeja celebrate as they walk off the ground at tea. Photograph: Jason Cairnduff/Reuters

Pant took India's total beyond the 150-run mark and in the process notched his half-century off just 51 balls. Thereafter, the southpaw grew more aggressive and started toying with the English bowling attack, targeting slow left-arm orthodox bowler Jack Leach and taking him to the cleaners, using his feet straight down the ground.

In the process, he became the youngest wicketkeeper-batter to scored 2,000 Test runs. He went on to post his fifth century, reaching the triple-figure mark off just 89 balls. He also smashed pacers Matthew Potts and James Anderson and part-time bowler.

Leach finished the day with figures of 71 runs in 9 overs and Potts conceded 85 runs in 17 overs, taking two wickets. 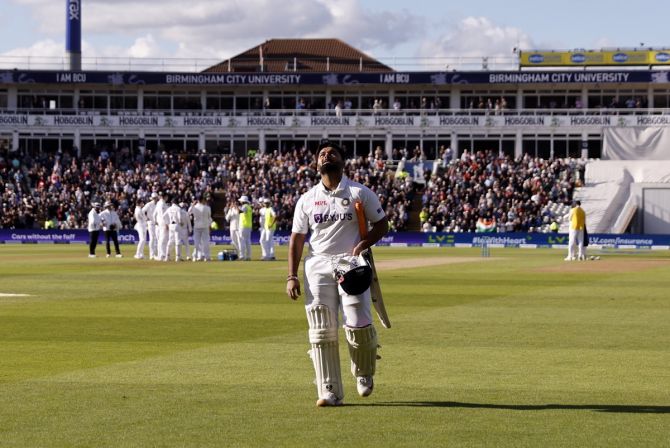 IMAGE: Rishabh Pant walks back after being dismissed for a magnificent 146. Photograph: Jason Cairnduff/Reuters

The Delhi lad’s fourth overseas ton includes one each in Australia and South Africa.

The Pant-Jadeja 222-run partnership for the sixth wicket is India's highest-ever against England, surpassing the 204-run Pant-KL Rahul stand at the Oval in London.

Jadeja was unbeaten on 83 at the end of the day's play, with Mohammed Shami at the other end.

India are 2-1 up in the series, which could not be completed last year following COVID-19 cases in the India camp ahead of the final match at Old Trafford.