'A special afternoon with the person who taught us so much and made us who we are.' Sachin Tendulkar and Vinod Kambli sought coach Ramakant Achrekar's blessings on the eve of the Tendulkar-Middlesex Global Academy camps’ kick-off, which begins in Mumbai on Thursday.

"A special afternoon with the person who taught us so much and made us who we are. His blessings are all we need to kick-off the TMGA Mumbai camps tomorrow," posted Tendulkar on Instagram. 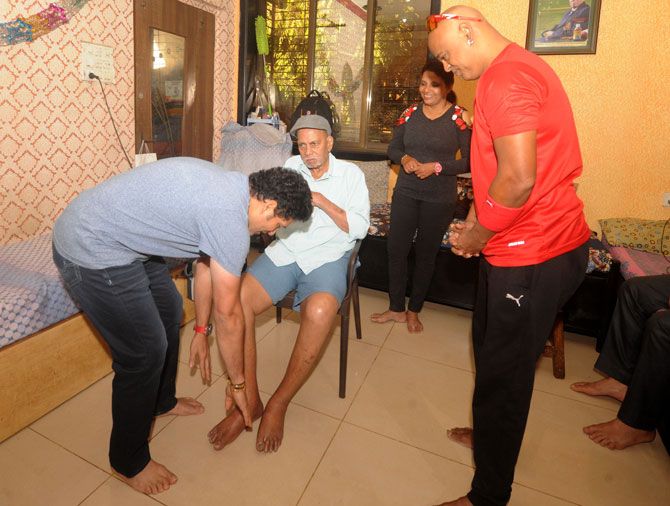 Also seeking Achrekar's blessings ahead of the inauguration of the coaching and talent-spotting camps the iconic Indian duo will conduct was former India player and Tendulkar's close friend, Atul Ranade.

"Yeh dosti... on our way to take blessings from Achrekar Sir before our TMGA India camps tomorrow.  @vinodkambli2016 #atulranade" Tendulkar and Kambli, arguably among the most-accomplished cricketers from Mumbai, are hoping to spot young talent from the city they have grown up in. They will hold camps at the D Y Patil stadium in Navi Mumbai from November 1 to 4 and at the MIG Club in Bandra from November 6 to 9 before having a couple of camps in Pune.

The camps have been launched in partnership with English county side Middlesex. Tendulkar recently got old friend Kambli on board to share his expertise.

“Vinod and I have played together from the time we were in school. When we met recently, I told him about my project and Vinod readily agreed to contribute. I am delighted to have him on board,” Tendulkar had told Mumbai Mirror recently. "Having Vinod on the cricket field with me will definitely bring back some very special memories," he added.