India, South Africa sweat it out IMAGE: Rohit Sharma during a practice session ahead of the 1st T20I against South Africa at the Greenfield international stadium in Thiruvananthapuram. Photographs: R Senthil Kumar/PTI Photo

South African Skipper Temba Bavuma expects the series to be a strong and competitive one.

The three-match T20I series between India and South Africa will kick off from Wednesday in Thiruvananthapuram. 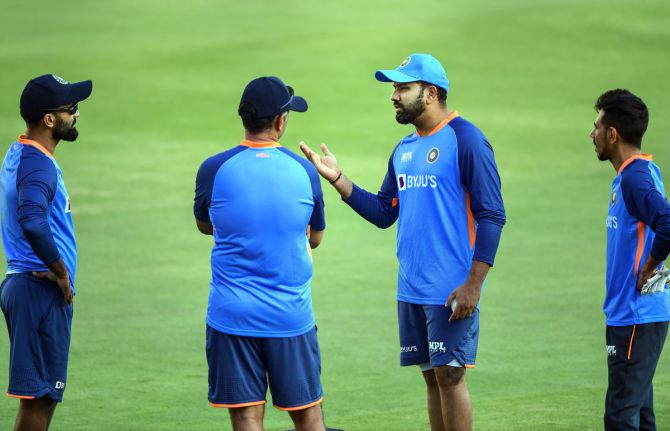 All rounder Axar Patel took special fielding drills while Ravichandran Ashwin was seen batting and bowling in the nets, hinting at a potential all-round role in Hardik Pandya's absence. IMAGE: The South African players during a practice session.

"We are expecting it to be a good series, a competitive one, as it always is when we play India," South African skipper Temba Bavuma told a pre-game media interaction.

"The last time we were here, we were tested and challenged in all departments of our game and I think we replied to it quite well. So I expect a good, strong and competitive series," Bavuma added.

"We have guys who have been playing a lot of cricket and I guess we will be managing their intensity. We also have guys who need some cricket under their belts," the captain pointed out.

"It will be to give those guys some game time because this is our last preparation in different conditions compared to Australia but still match time nevertheless."