PIX: England edge ahead after SA collapse on Day 1

Images from Day 3 of the third and final Test match between England and South Africa at The Oval in London on Saturday. IMAGE: Ollie Robinson celebrates the wicket of Marco Jansen of South Africa during Day d of the third Test Match between The Kia Oval in London, on Saturday. Photograph: Clive Rose/Getty Images

On a day of tumbling wickets, seamer Ollie Robinson took 5/49 as England skittled South Africa out for 118 on the third day of the third Test at The Oval on Saturday, before grinding their way to 154/7 in reply, a lead of 36 runs.

England had been looking to seize control of what has become a three-day Test after the first day was washed out by rain and the second cancelled as a mark of respect following the death of Queen Elizabeth II.

But after winning the toss and bowling South Africa out cheaply, England also struggled with the bat and had only a narrow advantage at the close.

Ben Foakes was not out on 11 and Robinson was on three when the umpires brought play to a halt due to bad light, after South African left-arm paceman Marco Jansen almost matched Robinson with the ball, taking 4/34.

The day had begun in a reflective mood as, after a rendition of 'God Save The King', being sung for the first time at a sporting event since the queen's death, there was a long round of applause as images of her were shown on screens around the ground. 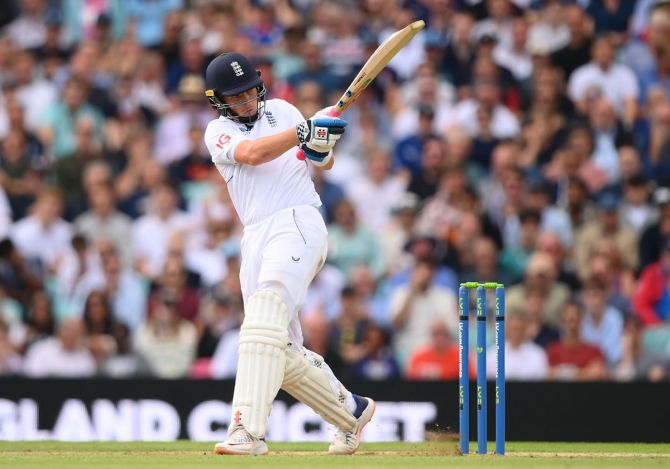 A fired-up England did not take long to get to work. Robinson clean-bowled South Africa captain Dean Elgar (1) in his first over with a delivery that nipped back in on the left-hander and clattered into the stumps.

James Anderson then had opener Sarel Erwee out for a duck before Keegan Petersen (12) failed to offer a shot and lost his off-stump to Robinson in an error of judgement.

Excluding Elgar, South Africa’s top seven batsmen have only played 38 Tests between them and in the face of an examination by the swinging Duke ball, the sense of panic was palpable.

Ryan Rickelton (11) played down the wrong line trying to defend a Stuart Broad delivery and was caught by Foakes, who also gobbled up an edge from Kyle Verreynne (0) off the bowling of Robinson.

But England's seamers were relentless and kept taking wickets, with Stuart Broad recording figures of 4/41 as he removed the tail halfway through the second session of the day. Jansen then got to work with the ball, removing the middle stump of England opener Alex Lees (13) in the fourth over and trapping Zak Crawley (5) leg before wicket in the 10th.

Joe Root added 23 runs to the score before becoming Jansen's third victim, edging the ball to Petersen at third slip.

Harry Brook (12) then came in for his England debut to support Ollie Pope at the other end, but soon skied a short ball from Jansen into the hands of Kagiso Rabada.

Captain Ben Stokes was out for a disappointing six, edging a simple catch to Sarel Erwee in the slips off a ball from Anrich Nortje, before Pope - who had calmly accumulated England's highest score of 67 - feathered a simple catch off Rabada to wicketkeeper Verreynne.

Rabada then claimed the scalp of Broad (6) who swished another easy catch to Verreynne, leaving England ahead -- but not by nearly as much as they would have hoped for earlier in the day.

To the disappointment of the crowd, the umpires then took the players off as the light began to fade.

The series is poised at 1-1 following the first two Tests, both of which ended inside three days.