PIX: Hardik, Bumrah shine as India get back to winning ways

Images from the third and final One-Day International between Australia and India at Manuka Oval, on Wednesday. 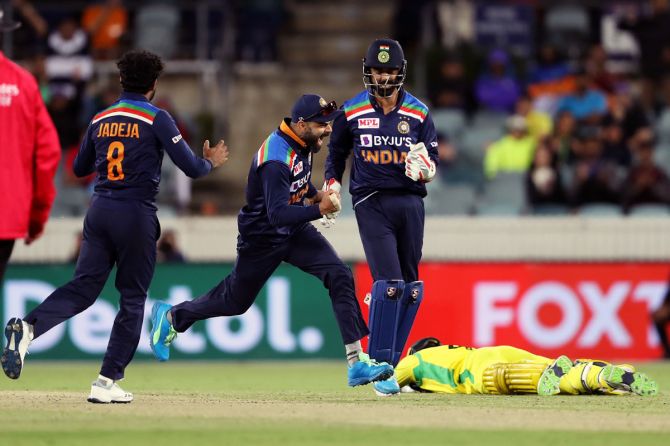 IMAGE: Virat Kohli, centre, celebrates after running out Australia's Alex Carey during the third and final ODI at the Manuka Oval in Canberra, on Wednesday. Photograph: Mark Kolbe/Getty Images

Pace spearhead Jasprit Bumrah found his mojo as India got back to winning ways with a morale-lifting 13-run triumph over Australia in the third and final ODI in Canberra on Wednesday, salvaging some of the lost pride in a 1-2 series defeat.

The rejigged bowling attack then bowled out Australia for 289 in 49.3 overs, to claim an important victory ahead of the three-match T20I series.

Shardul Thakur (3/51) and debutant Thangarasu Natarajan (2/70 in 10 overs) did their bit but it was Bumrah's (2/43 in 9.3 overs) controlled effort with some swing upfront and the dismissal of a marauding Glenn Maxwell at a crucial stage, which ultimately turned the match in India's favour. 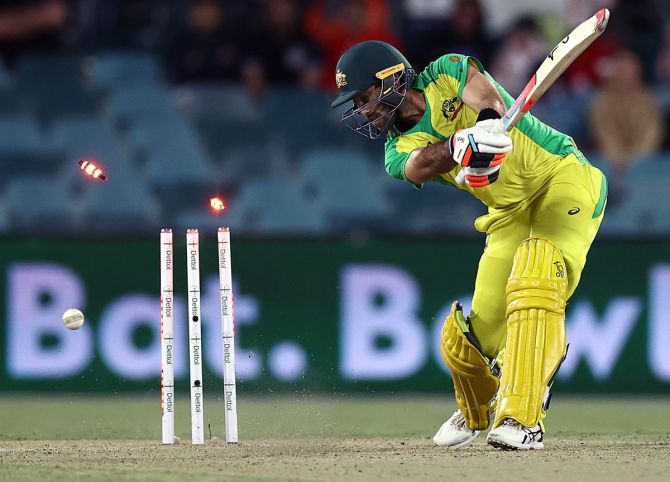 Bumrah's perfect yorker got rid of the dangerous Maxwell, who blasted his way to 59 off 38 balls.

Natarajan was taken apart by Maxwell before he found his rhythm and came up with yorkers under pressure, while Thakur also chipped in with vital wickets.

The inconsequential match became something of consequence for Virat Kohli and his men as they gear up for the next white-ball series -- three T20 Internationals in less than 48 hours.

India's bowling attack had a different look and it did perform way better compared to the first two games.

Natarajan was very steady in his first spell and got his maiden wicket when Marnus Labuschagne (7), in an unfamiliar role as opener, dragged a wide delivery back onto the stumps.

Thakur, replacing a rested Mohammed Shami, was also lucky when Steve Smith (7) was caught down the leg side by wicketkeeper KL Rahul.

Moises Henriques (22) and skipper Aaron Finch (75) looked good during their 51-run stand for the third wicket before the former failed to keep a pull-shot down off Thakur's bowling and was caught at midwicket. 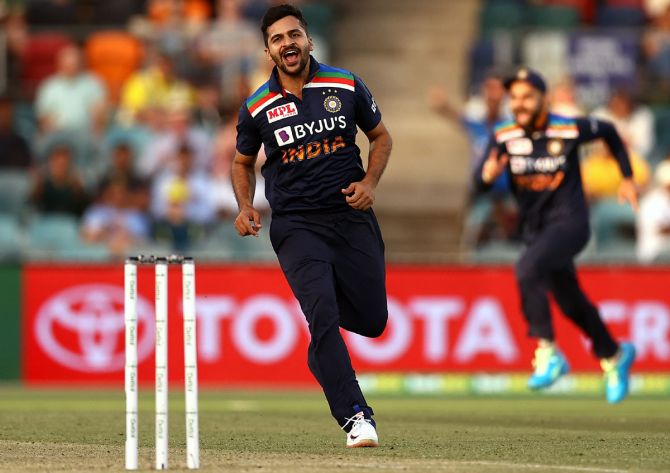 However, what was more heartening was Kuldeep Yadav's (1/57 in 10 overs) restrained bowling in the middle overs with the last over punishment by Maxwell being more of an aberration.

The flight was back and so was the dip in the air that used to create confusion in the minds of  batsmen.

Debutant Cameron Green (21) played an uppish slog sweep off Kuldeep which was snapped inches off the ground by Jadeja.

Jadeja (1/62 in 10 overs), who had a field day, topped up a solid batting show with the prized wicket of the rival captain Finch as Shikhar Dhawan managed to make an easy catch look difficult at long-on. 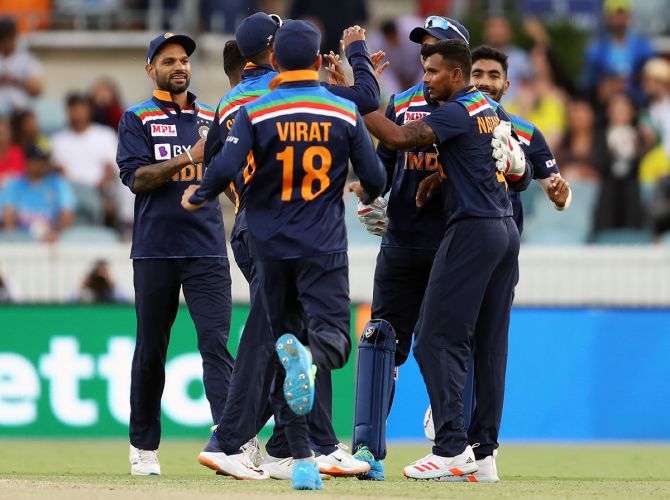 Maxwell and the calm Alex Carey (38 off 42 balls) looked like doing an encore of their victorious effort against England at Old Trafford last September.

But just when they settled down, Carey went for non-existent single only to be sent back by Maxwell as Australia were reduced to 210 for 6.

Fittingly, Bumrah finished off Australia as he got Adam Zampa leg before wicket for four. 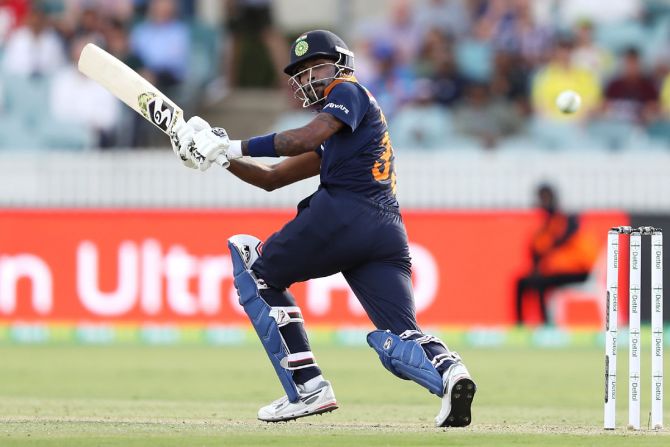 Earlier, Pandya played a trademark swashbuckling innings under pressure in the company of Ravindra Jadeja as a late flourish propelled India to 302/5.

Pandya hit an unbeaten 92 off 76 balls, while Jadeja slammed 66 not out off 50 balls, helped India make a stunning late recovery as they smashed 91 runs from the last seven overs. 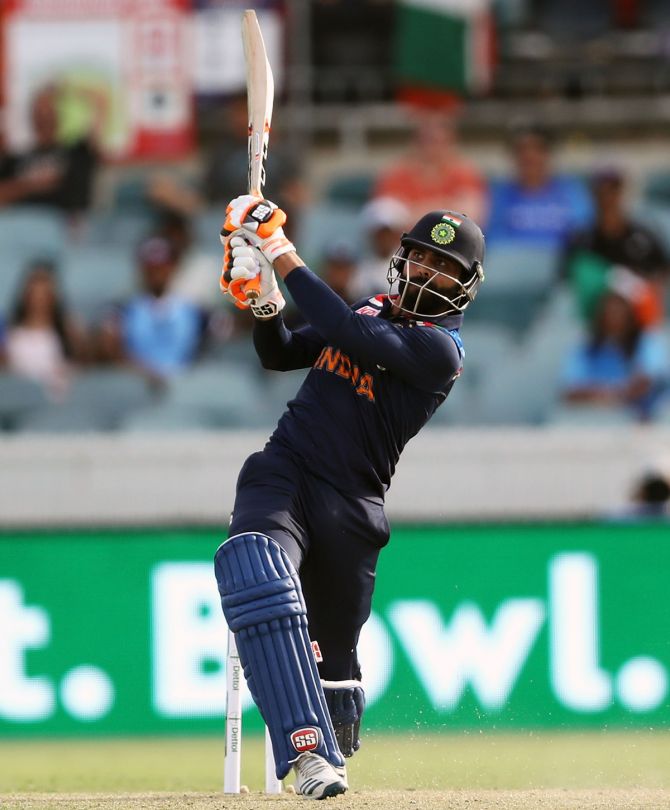 Coming together in the 32nd over, Pandya and Jadeja stitched 150 runs for the unbroken sixth wicket to change the complexion of the innings as India look to avoid the series clean sweep after losing the first two ODIs in Sydney.

India struggled in the middle overs as they looked set to get a total around the 250-run mark, but Pandya and Jadeja made it a different story. The duo took some time to settle down before opening the floodgates of boundaries in the last few overs.

Pandya's innings had seven fours and one six while Jadeja was at his best, hitting five boundaries and three sixes.

Except for Kohli, Pandya and Jadeja, other batsmen struggled on a flat track after India opted to bat.

Senior campaigners like Shikhar Dhawan (16) and KL Rahul (5) perished due to poor shot selection while Shreyas Iyer could contribute only 19 runs at the Manuka Oval, which is known for producing big scores. 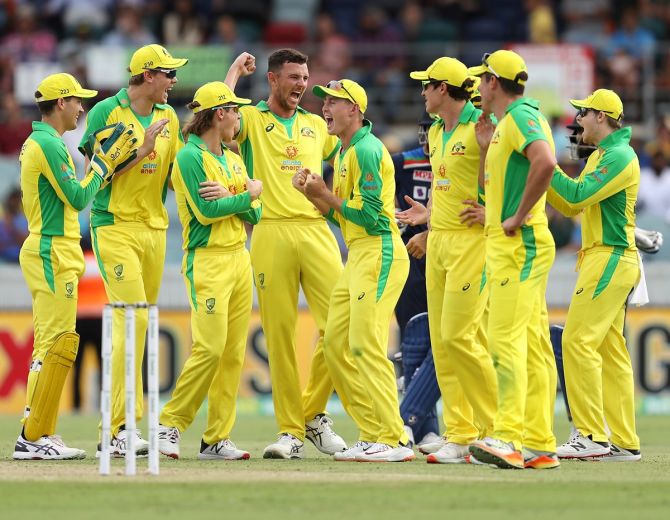 Kohli, who became the fastest cricketer to score 12000 ODI runs, showed the gumption to take the fight to the opposition camp with a 78-ball 63 which included five hits to the fence.

For Australia, Ashton Agar was the most successful bowler with figures of 2/44.

India made a relatively quiet start as compared to the earlier two matches with just a boundary coming in the first three overs and the opening duo playing out 12 dot balls during this initial period.

Soon, the visitors suffered a jolt in the fifth over with a soft dismissal of Dhawan who came out of his crease only to hit straight to Ashton Agar.

Kohli and Shubman Gill, who was selected in place of Mayank Agarwalm then put together 56 runs from just under 10 overs before the youngster got out LBW in the 16th over while trying to sweep Agar. His 33 came off 39 balls and had three fours and a six. 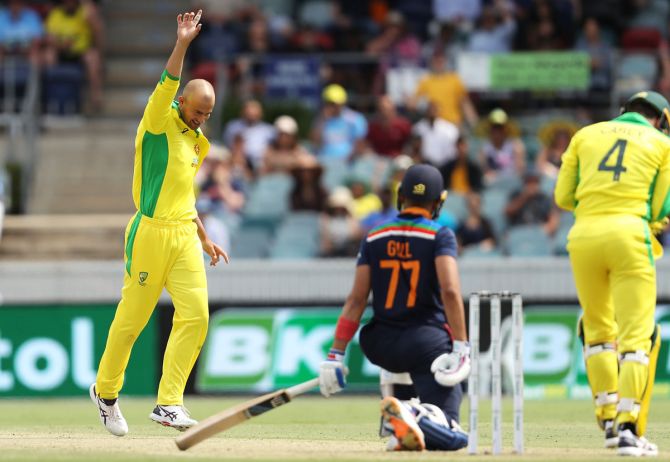 After Iyer sliced a delivery to Marnus Labuschagne, KL Rahul made a poor shot selection as he tried a sweep shot off Agar only to perish.

Kohli, who was in great touch, pulling, cutting and driving comfortably, was out in the 32nd over after a half-hearted review for a caught-behind by the Australians.

The Ultra-Edge showed a tiny spike and the umpire had to reverse his decision much to the dismay of the Indians.

It was then left to Pandya and Jadeja to take India past the 300-run mark.