Images from the first Twenty20 International between India and England, in Ahmedabad, on Friday. 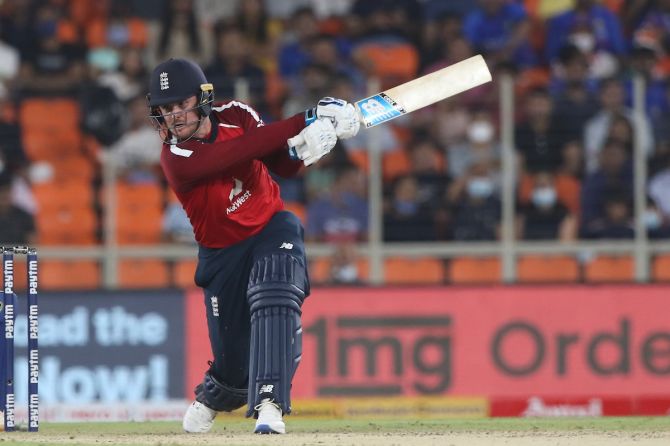 IMAGE: England opener Jason Roy sends the ball to the fence during the first T20 International against India, at the Narendra Modi stadium, in Motera, Ahmedabad, on Friday. Photograph: BCCI

England put their woes of the just-concluded Test series behind by trouncing India by eight wickets in the first Twenty20 International, at the Narendra Modi stadium, in Ahmedabad, on Friday.

Chasing India's paltry 124, made possible by a brilliant 67 off 48 balls from Shreyas Iyer, after loss of the top order cheaply, the visitors won with 27 balls to spare. Opener Jason Roy was England's top scorer with 49 off 32 balls, including three sixes and four fours, as they finished with 130 for 2.

Washington Sundar (1/10) and Yuzvendra Chahal (1/44) accounted for the wickets that fell. 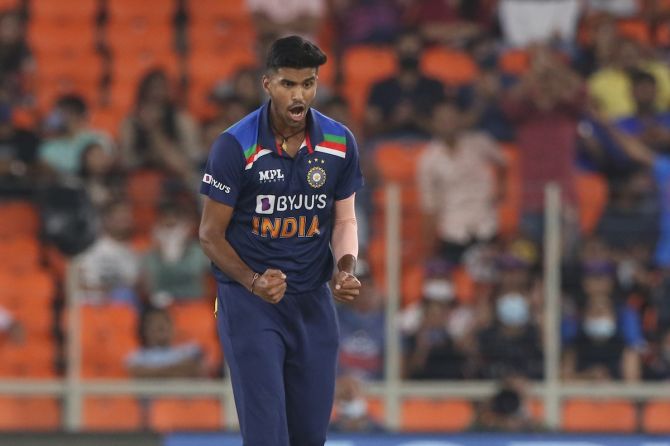 England were given a solid start by Jason Roy and Jos Buttler. The pair put on 72 runs in eight overs.

But just when it looked as if they would overhaul India’s meagre total, Buttler was out. He played down the wrong line as Yuzvendra Chahal, back into the attack, got a straight delivery through his defences. It rapped him on the pad and up went the umpire’s the finger.

14 runs and a wicket come from the over as Buttler was out LBW for 28 and England 72 for 1 after eight overs. 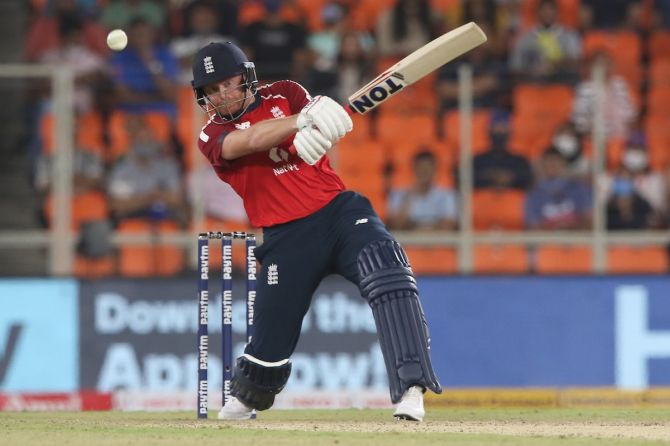 Sundar, back in the attack, got India’s second success of the evening, off the first ball of the over.

Jonny Bairstow (26) and Dawid Malan (24) then hit up the remaining runs as England won with much to spare. 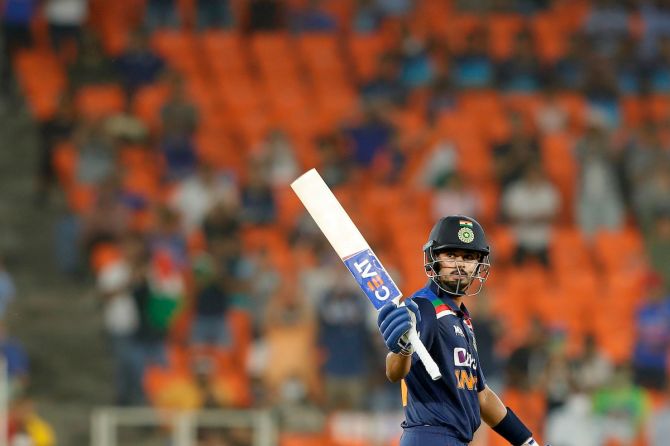 His gritty 67-run innings ensured that the hosts finished with 124 for seven after being put in to bat.

Iyer's best knock in Twenty20 Internationals, off 48 balls, was studded with eight boundaries and a six. He fell in the last over in search of runs to boost the paltry total.

Put in to bat, Shikhar Dhawan and Lokesh Rahul opened the batting for India, but England sprang a surprise, opting for Adil Rashid to get their bowling started.

After Rashid conceded just two off the over, Jofra Archer opened from the other end, and struck immediately, dismissing with Rahul with his second delivery.

The ball, pitched just outside off-stump, went crashing into the stumps as Rahul, static in his crease, went for a big hit. 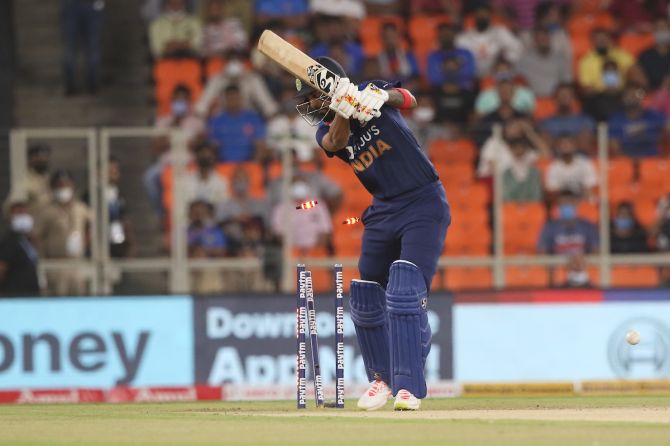 India were 2 for 1 in the second over.

England’s start got even better as India skipper Virat Kohli was out without scoring in the next over.

Rashid sent one down the leg side and Kohli slashed it to the off side, only to be caught in the covers by Chris Jordan. 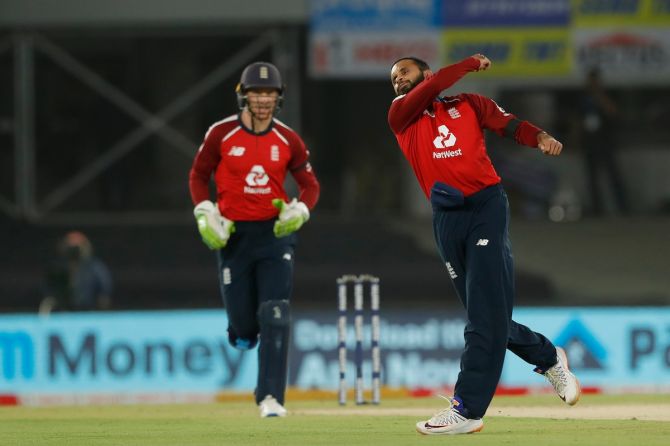 Two wickets in two overs for England and India were on the backfoot.

New-man in Rishabh Pant, as expected started in whirlwind fashion, rocking back and cutting the ball through square on the off side for a four to get off the mark. 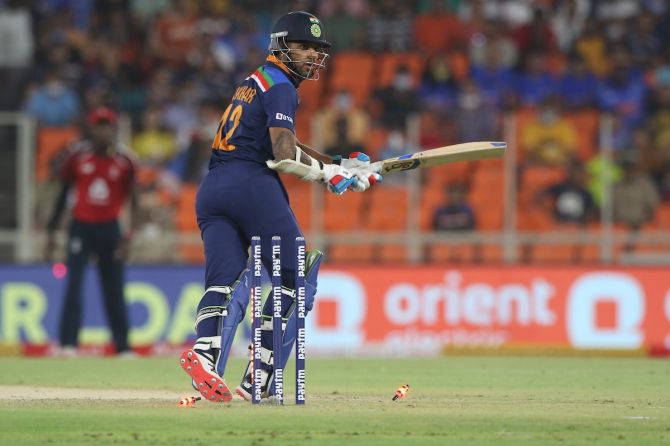 The scoreboard ticked a bit before Mark Wood, who came into the attack in the fifth over, gave England their third success.

Dhawan went after a short delivery but missed it and looked back to find his stumps shattered. 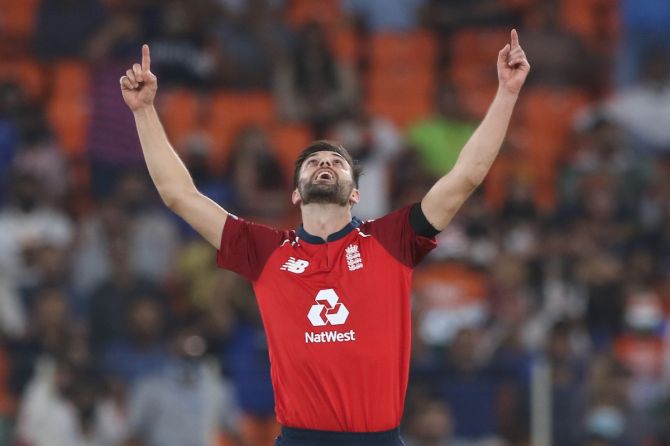 Pant and Shreyas Iyer got about building India’s innings with some big hitting, but just when they were looking good to stitch up a partnership and bring up India’s fifty, Pant, looking to accelerate, was out.

Ben Stokes sent the ball down the leg side and Pant clipped it high, straight into the hands of Jonny Bairstow, at deep backward square leg. 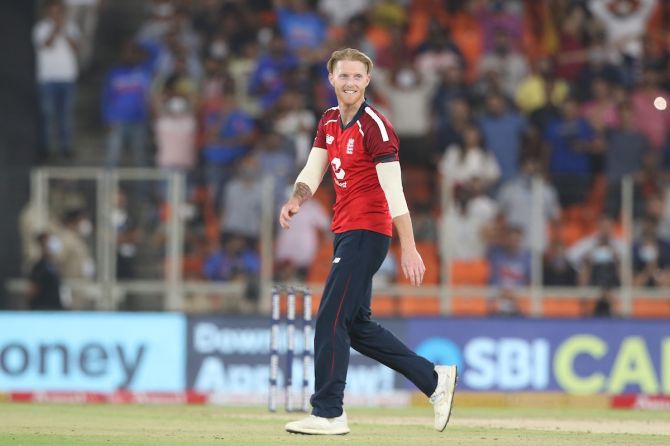 Iyer brought up his 50, off 36 balls, off the first delivery of the 17th over and ended it with a six.

Archer was back in the attack in the 18th over and just when it looked like India would finish on a high, he dashed whatever hopes they may have entertained by dismissing Hardik Pandya for 19.

The batsman, going after a short ball, rocked back and hit it into the hands of Jordan at mid-off. He was out for 19 and India 102-5 after 17.2 overs. 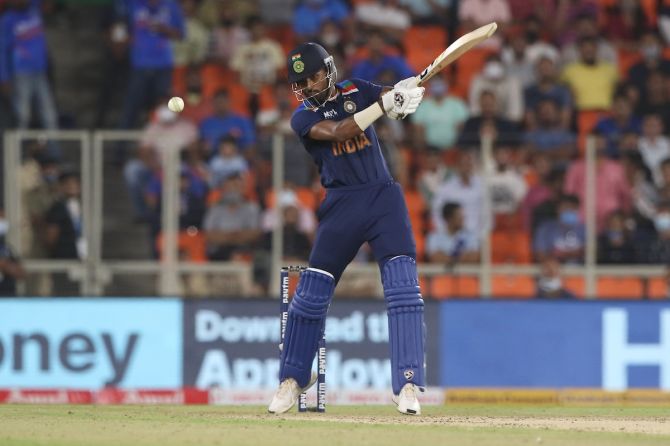 IMAGE: Hardik Pandya bats during his 19 off 21 balls. Photograph: BCCI

Archer struck again with the next delivery as Shardul Thakur, the new-man in, tried to hoick a short delivery and was caught by Dawid Malan in the deep for a duck.

Jordan got himself among the wickets in the last over, dismissing Iyer. He sent down a slower delivery which the batsman went after, only for Malan to take a superb catch, running to his right on the boundary. 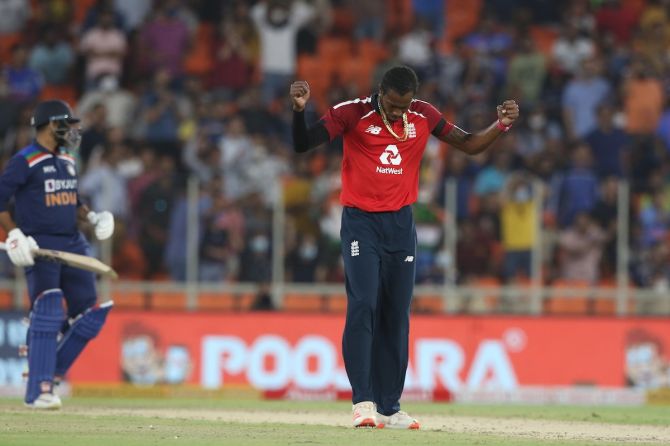 Archer, with three wickets for 23 runs, was England's most successful bowler. Rashid, Jordan, Stokes and Wood chipped in with one each.

The visiting players wore black armbands in memory of former cricketer Joey Benjamin, who passed away on Wednesday. 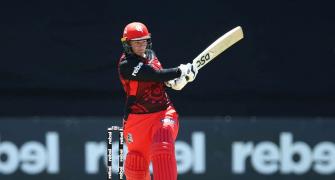 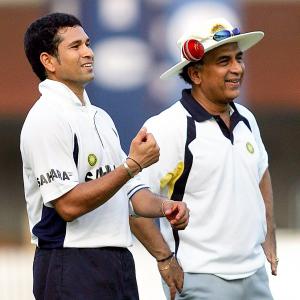 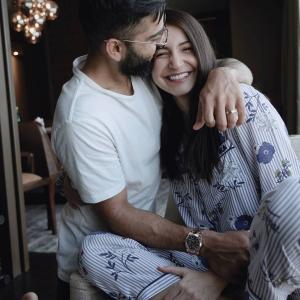