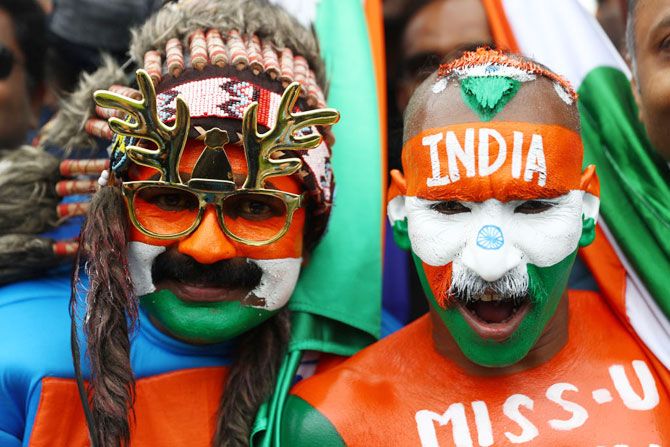 IMAGE: India supporters in all their splendour during their ICC Cricket World Cup match against Pakistan at Old Trafford in Manchester on Sunday. Photograph: Michael Steele/Getty Images

Noisy India and Pakistan cricket fans brought a taste of the subcontinent to Manchester on Sunday, their enthusiasm undimmed by the threat of rain looming over a World Cup match between the regional rivals that will draw a massive global audience.

Organisers received nearly 800,000 applications for tickets at the 23,000-capacity stadium in the northern English city to watch the former champions who play each other only in global tournaments because of their soured political relations.

Another one billion are expected to watch it on television. 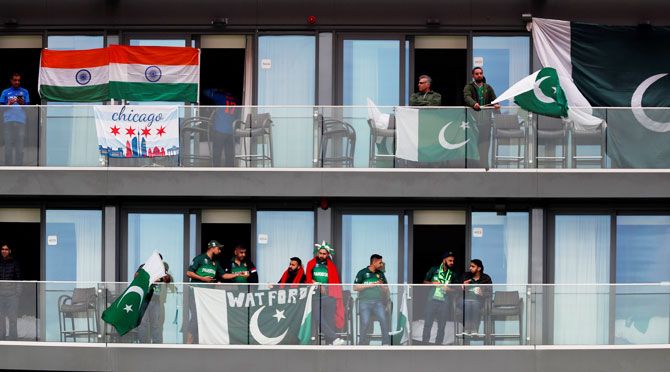 Pakistan have never beaten India in a World Cup but Sarfaraz Ahmed's men received encouragement from Prime Minister Imran Khan, the former cricketer who led the country to their maiden World Cup trophy in 1992.

"Today, given the intensity of the match, both teams will come under great mental pressure and the power of the mind will decide the outcome of the match today," Khan said in one of his tweets.

The nuclear-armed neighbours have gone to war three times since independence in the mid-20th century - and another conflict nearly erupted earlier this year, heightening the tensions around the action on the field.

The match has drawn fans from across the world, including Ankur Bajpayee, a 39-year-old telecom executive who took a 16-hour flight from Johannesburg just to attend a match he hopes would not be a washout. 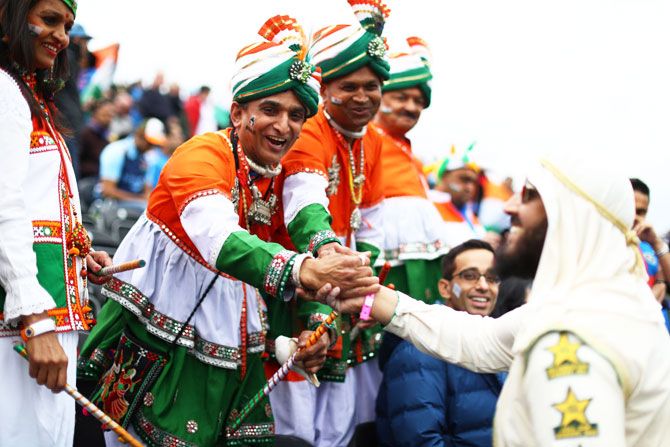 IMAGE: India and Pakistan supporters greet each other before the match. Photograph: Michael Steele/Getty Images

"I landed here last night and going back tomorrow," he told Reuters.

"I've prayed for three things -- the match should happen, India should win this match and they should win the tournament. I'm sure all three wishes will be fulfilled."

Pakistan supporter Hassan Ghani had flown in from his home in Los Angeles for the match he said he simply could not miss.

"The games against India are always the biggest games, the rivalry is so huge, the patriotism always comes out and the atmosphere is always great," he said. 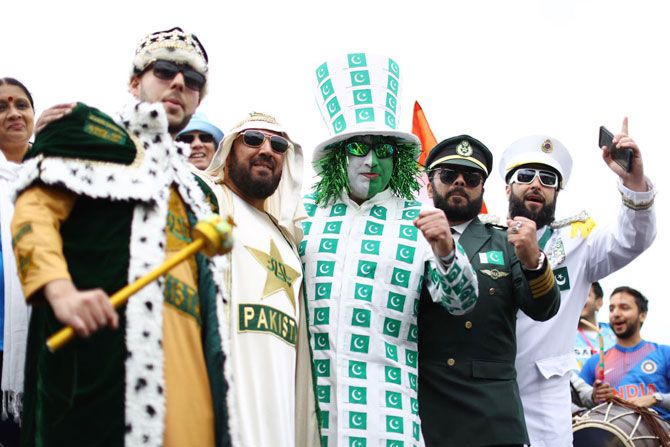 India captain Virat Kohli has advised his team mates not to get caught in the hype around the match but Pakistan coach Mickey Arthur, who is South African, has told his players that it could be career-defining for them.

Scores of Pakistani supporters wore the green team shirt and draped themselves in national flag, while their Indian counterparts wore turbans and colourful wigs as they filed in.

"It's India-Pakistan, it's the biggest rivalry in sports," India fan Jay Tailor, who came from Luton in southern England, told Reuters.

"As much as they may say it's just another game, the players are going to be nervous. With one billion people watching the game, of course there will be an element of nerves. It's not just another game." 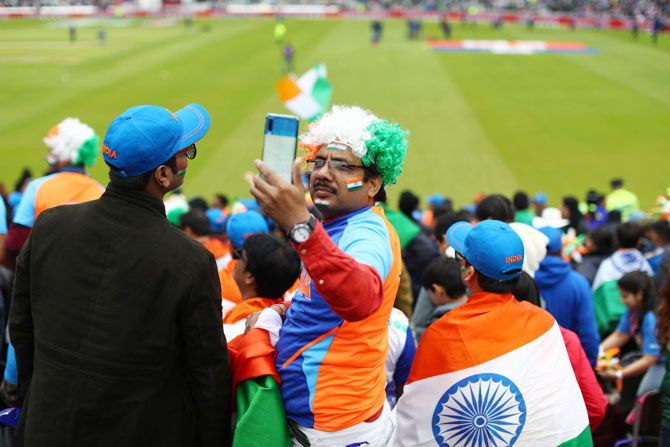 IMAGE: An India supporter takes a selfie ahead of the big-ticket encounter. Photograph: Michael Steele/Getty Images

Outside the stadium, Hussain was busy selling jerseys, scarves and hooters to fans from both teams.

"I've been here for just over an hour and have already exhausted my first lot," the 24-year-old Pakistani, who now lives in the English city of Birmingham, said with a smile.

"My hats are selling the most, because of the chance of rain."

Four matches in the rain-hit tournament has already been either abandoned or called off without a ball being bowled.

Fans have organised prayers in several Indian cities hoping the rain gods will spare the match.