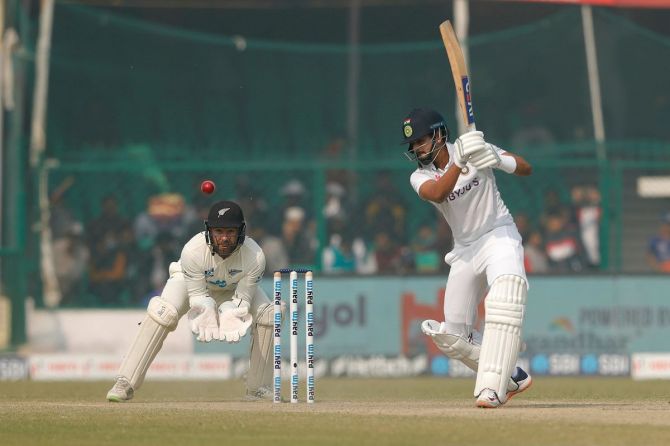 IMAGE: Shreyas Iyer hits one to the boundary. Photograph: BCCI

India's Shreyas Iyer once again dazzled on his debut Test, hitting his second 50-plus score of the match to put his team in charge of the opening Test against New Zealand on Sunday.

New Zealand claimed four wickets in the morning session to nose ahead on the penultimate day of the see-saw conTest at Kanpur's Green Park Stadium.

Iyer followed his first-innings hundred with a crucial 65, forging 50-plus stands with Ravichandran Ashwin and Wriddhiman Saha to revive India who declared their second innings on 234-7.

Chasing a daunting victory target of 284 on a worn-out track, the tourists were four for one when bad light stopped play.

New Zealand opener Will Young was given lbw to Ashwin, which could have been reversed but the batsman was late to review the decision.

Tom Latham will resume on two on Monday with nightwatchman Will Somerville, who is yet to open his account, for company.

"If we bat with some good intent and make the most of opportunities to score them, then we certainly believe we can chase them down.

"From the Indian point of view, they'll be going full of confidence that they can stop us from doing that." Earlier, New Zealand's Tim Southee (3-75) struck twice in three balls in the morning session as they blew away India's top order after the home side had resumed on 14-1.

Kyle Jamieson (3-40) conceded a couple of early boundaries before he dismissed Cheteshwar Pujara, who made 22, to open the flood gates.

Southee then twisted the knife by removing opener Mayank Agarwal, caught in the slip, and Ravindra Jadeja, trapped lbw, in a two-wicket maiden over to reduce India to 51-5.

Iyer and Ashwin, who made 32, not only steadied the innings but also scored briskly to put the pressure back on New Zealand.

Iyer departed on the stroke of tea but Saha soldiered on despite a stiff neck that kept him off the field on Saturday. IMAGE: Wriddhiman Saha raises the bat after reaching his half century. Photograph: BCCI

Saha remained not out on 61, having featured in a second 50-plus partnership with Axar Patel who made 28 not out before India declared.

It was a memorable Test debut for Iyer who was selected only after several frontline batsmen, including regular skipper Virat Kohli, were rested.

"I was aware I am the first Indian to score a century and a fifty (on Test debut)," the batsman said.

"In the end, we have to win the match, and that would be the most important thing for me."

Iyer's fairytale start presents the team management with a selection headache as Kohli is set to return for the second and final Test in Mumbai from Friday.