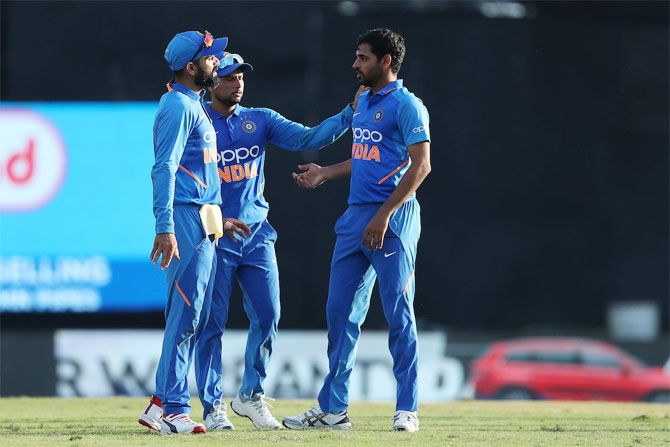 Captain Virat Kohli led from the front with a brilliant century, the 42nd of his career, to guide India to a comfortable 59-run win over the West Indies via Duckworth-Lewis method in the second ODI in Port-of-Spain, Trinidad, on Sunday.

With this win, India take a 1-0 lead in the three-match ODI series. The first ODI was washed out.

West Indies were then set a revised target of 270 runs to chase off 46 overs under the D/L method after rain interrupted the proceedings for the second time in the game.

In pursuit, the hosts were on course at 148 for four before they lost their last six wickets for 62 runs to be bundled out for 210 in 42 overs.

Bhuvneshwar Kumar (4/31) was pick of the bowlers for India, while Mohammed Shami (2/39) and Kuldeep Yadav (2/59) scalped two wickets apiece.

West Indies started their chase on a cautious note with Chris Gayle and Evin Lewis (65) stitching 45runs in 9.3 overs for the opening stand. 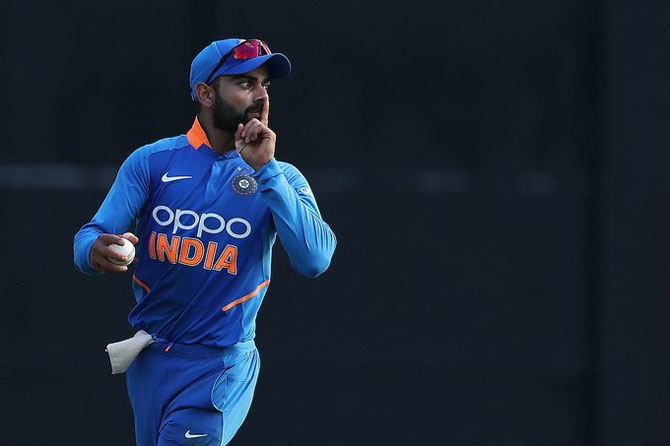 Gayle, playing his 300th ODI, the most by a West Indian, went passed Brian Lara to become the highest scorer for West Indies in ODI cricket -- Gayle reached the milestone with a single off Khaleel Ahmed in the ninth over.

Gayle, who now has 10,353 runs as compared to Lara's 10,348, departed soon after achieving the feat, out LBW to Bhuvneshwar in the 13th over. His stay at the crease was a struggle as he managed just 11 runs off 24 balls.

No 3 batsman, Shai Hope didn't last long as he inside edged a Khaleel delivery.

Shimron Hetmyer (18) showed glimpses of his talent before he was caught by Kohli off Kuldeep. He shared 40 runs for the third wicket with Lewis.

Battling cramps, Lewis carried on and registered his fifth ODI half-century. Lewis and Nicholas Pooran (42) then shared 56 runs before Kohli took a one-handed catch to send back the former off Yadav's bowling.

Shami polished off the tail, picking up the wickets of Sheldon Cottrell and Oshane Thomas. 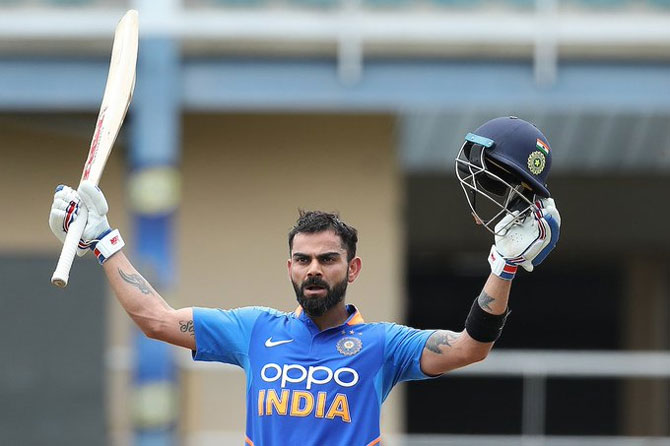 Coming on to bat in the fourth ball of the innings, Kohli played aggressively and scored 120 off 125 balls to guide India's innings. He hit 14 boundaries and one six during his elegant knock.

Shreyas Iyer (71 off 68) struck his third ODI half-century and together with his skipper shared 125 runs for the fourth wicket to take India to a comfortable position.

But it was far from rosy for India at the start as after opting to bat, they lost Shikhar Dhawan on the third ball of the innings, caught plumb in front of the wicket by Sheldon Cottrell.

Then came in skipper Kohli and in the company of Rohit Sharma (18) played fluently to stabilise the Indian innings.

While Kohli looked in great nick from the onset, Rohit struggled to rotate the strike and played the second fiddle. 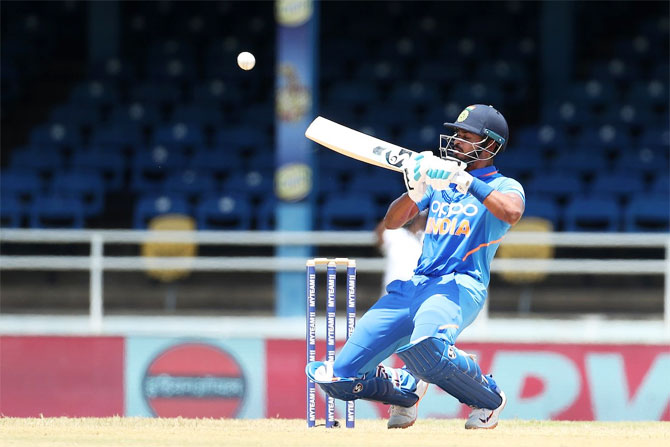 IMAGE: Shreyas Iyer plays an upper cut during his innings of 71. Photograph: BCCI

Kohli played some delightful shots through the covers and off his pads to register his 55th ODI fifty with an outside edge past West Indies keeper Shai Hope off Carlos Brathwaite (3/53) in the 15th over.

But Rohit's struggle finally came to an end when he sliced a Roston Chase delivery to Nicholas Pooran, who took a fine catch at point while running backwards.

The duo shared 74 runs for the second wicket off 90 balls.

Rishabh Pant made 20 off 35 balls with the help of two boundaries before inexperience did him in.

Bogged down by 12 dots off 14 balls, an inexperienced Pant went for an ugly slog across the line over midwicket off Brathwaite, only to find his timbers disturbed as India were reduced to 101 for 3.

Kohli and Iyer then played aggressively and milked the West Indian bowlers to keep the scoreboard ticking.

The duo rotated the strike and found the fence when bad deliveries were on offer. 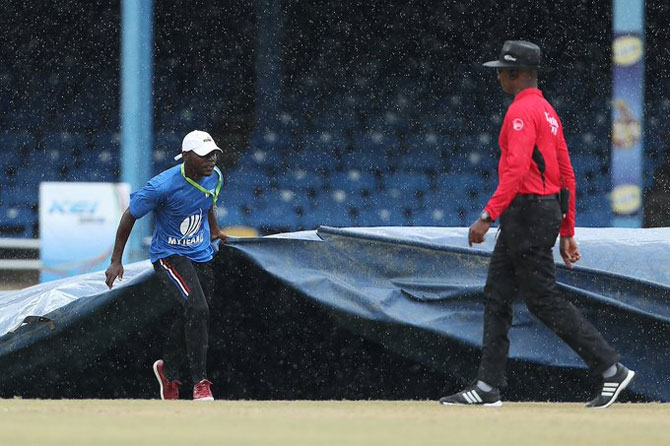 IMAGE: A groundsman runs in with the covers as rain interrupts play during the India innings. Photograph: BCCI

But hot and humid conditions got the better of Kohli in the 42nd over as the Indian skipper played a tired-looking shot only to be holed out by Kemar Roach at long-off off Brathwaite.

Just after his dismissal, rain halted play for 25 minutes before the teams took the field again.

Iyer played a good knock before some brilliant bowling from West Indies skipper Jason Holder got the better of him. Iyer was bowled around his legs as he went across the stumps for an extravagant shot. He hit five boundaries and one six during his knock.

But West Indies came back strongly in the last 10 overs to peg back the Indians with some clever bowling display.

Comfortably placed at 212 for 3, the Indians could only manage 67 runs for the loss of four wickets in the last 10 overs.

Get Rediff News delivered into your Inbox.
Source: PTI© Copyright 2020 PTI. All rights reserved. Republication or redistribution of PTI content, including by framing or similar means, is expressly prohibited without the prior written consent.
Related News: ODI, Kohli, India, West Indies, Shreyas Iyer
SHARE THIS STORYCOMMENT
Print this article 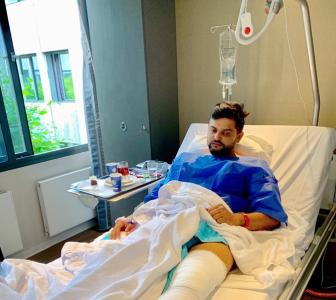 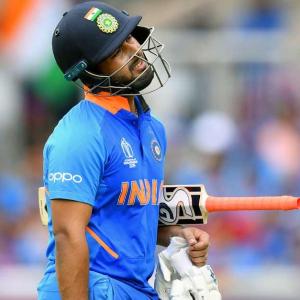 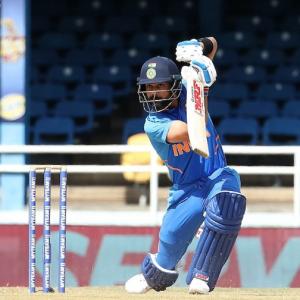