Steve Smith capped a remarkable season on Tuesday by sweeping the main awards at the annual Allan Border Medal ceremony, including Australian player of the year.

The prolific batsman, who was recently named Australia captain in the absence of the injured Michael Clarke, also walked off with the One-day and Test player awards.

He was a runaway winner for the Allan Border Medal -- judged on performances in Tests and One-dayers throughout the season -- by polling 243 votes, ahead of David Warner (175) and Mitchell Johnson (126). 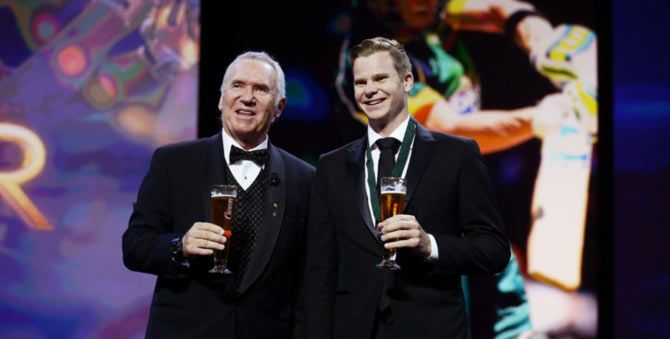 He is only the third player to win the trifecta in the 10 years it has been running, after Ricky Ponting in 2007 and Shane Watson in 2011. Other Allan Border Medal winners include Glenn McGrath, Steve Waugh, Adam Gilchrist, and Clarke.

He narrowly held off Warner as Test player of the year and Aaron Finch for the One-day honour.

Glenn Maxwell was rewarded for his efforts with bat and ball with the Twenty20 player of the year. The emotional high-point of the night came when Sean Abbott was named the Bradman Young Cricketer of the Year.

The New South Wales all-rounder has shown courage and maturity to bounce back from the tragic death of Phillip Hughes during a Sheffield Shield match in November.

Abbott bowled the ball that killed Hughes and there were initially fears that the 22-year-old may be too traumatised to continue his career.

Meg Lanning won the Belinda Clark Award for the second year in a row, confirmation of her stellar 12 months with the bat and as captain of the side that retained the ICC Women’s World Twenty20 in Bangladesh. At the age of 21, Lanning became the youngest player -- male or female -- to captain Australia. She led her side to a third successive ICC Women’s World Twenty20 title in Bangladesh and under her captaincy the team lost only two of 28 matches. She was also named the ICC Women’s Twenty20 Player of the Year last November and finished 2014 as the top-ranked batter in both ODI and T20I cricket.

Left-arm seam and swing bowler Jason Behrendorff of Western Australia and the Perth Scorchers secured the award for the Domestic Player of the Year, while Adam Gilchrist and Jack Ryder were also formally inducted into the Australian Cricket Hall of Fame.