Images from Day 1 of the first Test between Australia and India in Adelaide on Thursday. 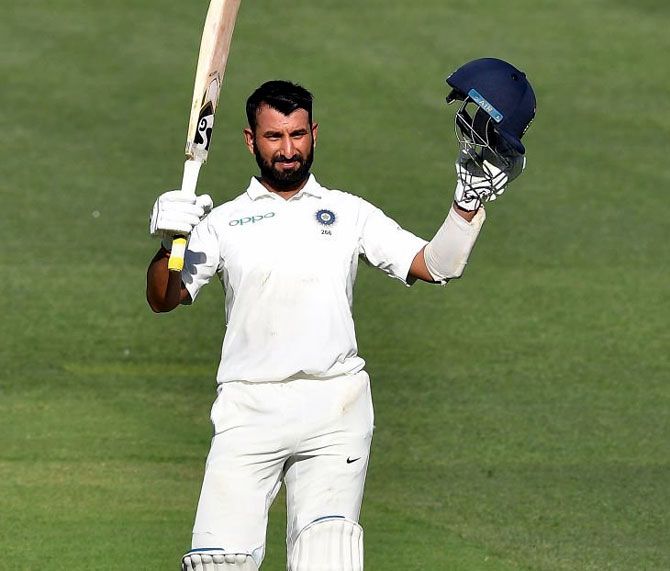 Cheteshwar Pujara struck a defiant century in an Adelaide Oval furnace to rescue India after Australia's pacemen threatened to dominate day one of the series-opening Test on Thursday.

The India number three battled a hamstring strain late in the day but was a rock even as his partners crumbled around him, pushing India to 250 for nine at the close with a brutal assault on the second new ball.

Unbroken by dogged and often fierce pace bowling, Pujara was dismissed for 123 by a piece of brilliant fielding, with Pat Cummins swooping in to throw down the stumps.

That was the last play on a day of scorching heat, leaving tail-ender Mohammed Shami on six, with Jasprit Bumrah the final batsman to resume on day two. Pujara's 16th Test century saved India after a disastrous start that saw them slump to 86 for five after lunch, falling to a combination of dreadful shot-making and quality Australian pace after captain Virat Kohli won the toss.

"To be honest, we should have batted better but they also bowled well in those first two sessions," Pujara told reporters.

"It was hot but I was set and I knew I could play my shots.

"Once we lost Ashwin, I thought I had to accelerate. I knew what shots I could play on that wicket." Pujara anchored vital partnerships with young wicketkeeper Rishabh Pant and spinner Ravichandran Ashwin before completing his century with a flick off his pads after scoring his 5,000th run in Tests.

Having crawled to his half-century, Pujara ramped up as he ran out of partners, slogging a couple of sixes as shadows crept across the ground. 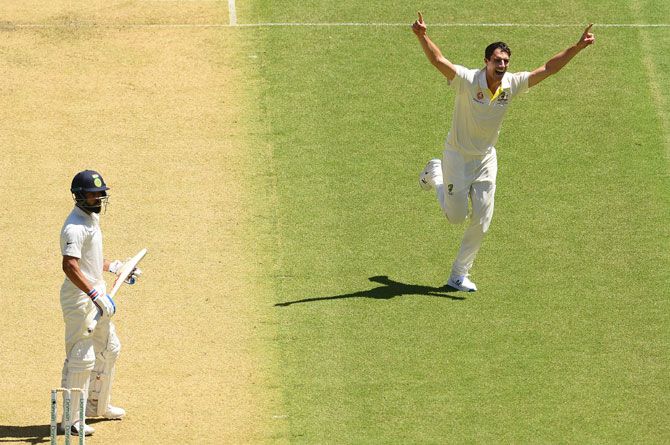 India had resumed on 143 for six after tea with seamer Cummins having Ashwin edge to the slips for 25 and Mitchell Starc bowling Ishant Sharma for four.

Spinner Nathan Lyon struck twice to expose India's tail after lunch, having the recalled Rohit Sharma slog-sweep to a fielder for 37 before Pant fell for 25 feathering an edge behind. 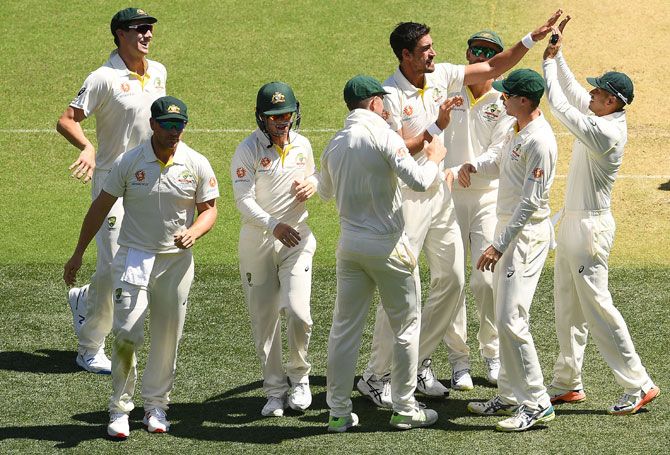 IMAGE: Mitchell Starc, centre, is congratulated by team mates after getting the wicket of Murali Vijay. Photograph: Quinn Rooney/Getty Images

Five of India's top six were out to loose shots, including captain Kohli, who fell for three to a stunning one-handed catch in the gully by a leaping Usman Khawaja.

"Stuck my hand out and it stuck. It's nice when they do stick," said the Australian number three.

"It was a good little momentum-goer too, because we got a couple of early (wickets)." 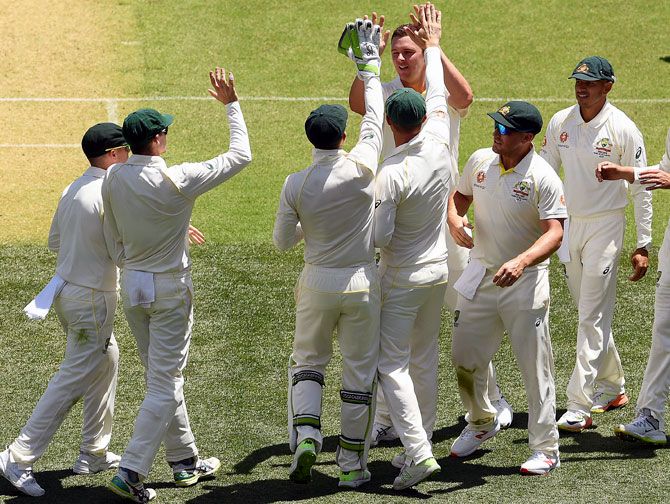 Starc removed Murali Vijay for a streaky 11, the recalled batsman edging another rash shot behind to Tim Paine.

"For the most part we were exceptional with the ball today," said Starc.

© Copyright 2021 Reuters Limited. All rights reserved. Republication or redistribution of Reuters content, including by framing or similar means, is expressly prohibited without the prior written consent of Reuters. Reuters shall not be liable for any errors or delays in the content, or for any actions taken in reliance thereon.
Related News: INDIA, Australia, PHOTOS, Adelaide
COMMENT
Print this article 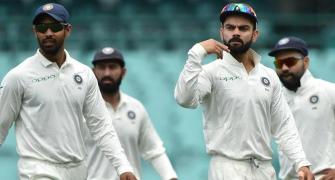 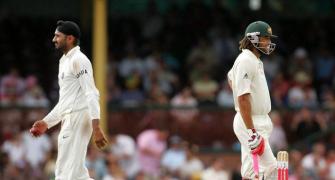 I wanted team to return home after 2008 Sydney Test: Laxman 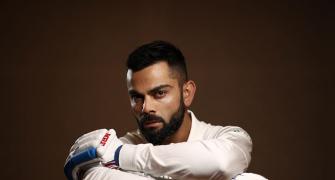 Virat Kohli: On Aussie obsession and love affair with Adelaide