Images from the opening T20 International between India and New Zealand in Auckland on Friday. 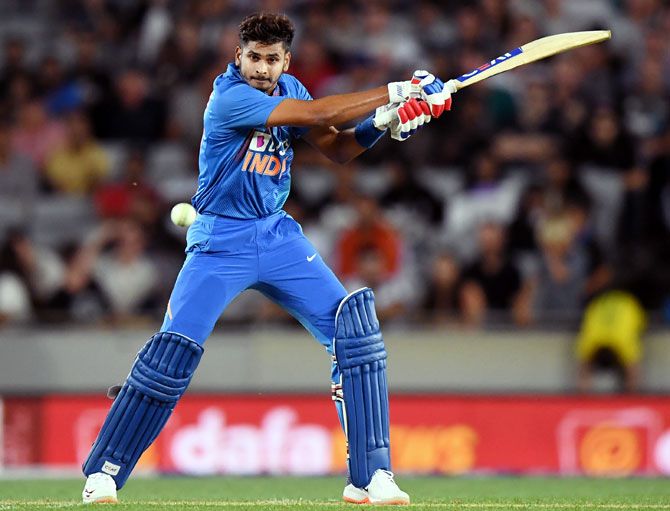 The immensely talented Shreyas Iyer enhanced his reputation as a finisher with a scintillating 29-ball-58 in India's six-wicket victory over New Zealand in a high-scoring first T20 International,  in Auckland, on Friday.

Iyer built on KL Rahul's (56 off 27 balls) blazing start and Virat Kohli's useful 45 off 32 balls as India made short work of a 204-run target, knocking it off with an over to spare.

However, credit should be given to Indian bowlers for restricting New Zealand towards the end considering the dimensions of the Eden Park.

Earlier, Colin Munro and Kane Williamson had smashed quick-fire half-centuries as New Zealand piled on a huge 203 for five in their 20 overs. India's run chase started off disastrously as they lost opener Rohit Sharma (7) early in the second over as he played one too many shots in a bid to go after spinner Mitchell Santner (1-50).

Rahul and Kohli then took charge of the innings with an 80-run partnership coming off only 47 balls. The duo launched a good array of strokes with seven fours and four sixes between them as New Zealand struggled to contain the runs.

India crossed 100 in the ninth over thanks to their whirlwind partnership, albeit both had chances. Rahul survived a run out chance as New Zealand failed to hit the stumps twice, and then Ish Sodhi dropped a sitter off Kohli.

Continuing his fine form, Rahul notched up his half-century off 23 balls while Kohli fell short of his landmark by just five runs. Together, they provided the base for India's middle order to finish the chase. The Black Caps roared back into contention with a double blow. First, Rahul was out caught off Sodhi in the 10th over and then seven balls later, Martin Guptill pulled off a screamer at deep midwicket to send back Kohli.

India lost both their set batsmen for six runs and their ploy to send Shivam Dube (13) up the order only had limited success. Dube and Iyer added 21 runs to provide some acceleration, before the all-rounder became Sodhi's second dismissal of the night.

Iyer then took charge of proceedings as he smacked five fours and three sixes to propel India to victory. He added 50 off 29 balls with Manish Pandey, who hit 14 not out off 12 balls with a six.

It was an immaculate display by the young batsman who showed the benefits of reaping experience batting in the middle order and perhaps answering India's questions regarding the number four situation. This was after Munro, Williamson and Ross Taylor (54 not out off 27 balls) made the Indian bowlers suffer. Jasprit Bumrah (1-31) put in a good shift with clever change of pace and control.

Munro scored 59 off 42 balls, including six fours and two sixes, while Williamson hit four fours and four sixes in his 26-ball 51-run innings as the Black Caps' made good use of the peculiar Eden Park shape to pile on the runs.

New Zealand quickly got off the blocks with openers Munro and Martin Guptill (30 off 19 balls) putting on 68-0 in the power play. It was the highest power play score for New Zealand against India in T20Is (previous best 66-0 in 2019). 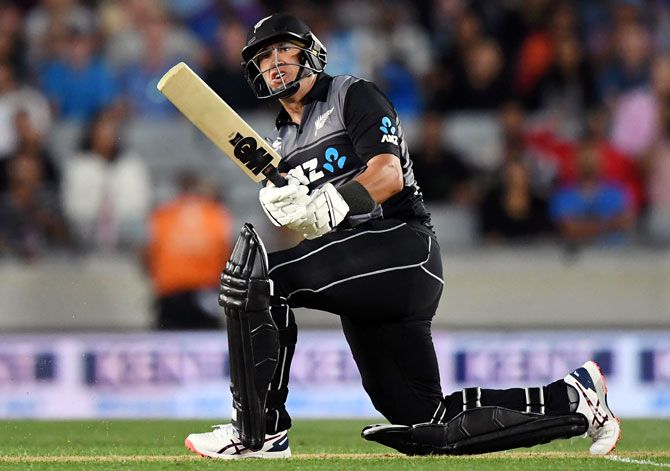 Colin Munro and skipper Kane Williamson smashed quickfire half-centuries as New Zealand made good use of the short boundaries at Eden Park to post 203 for five.

Munro scored 59 off 42 balls, including six fours and two sixes, while Williamson hit four fours and four sixes in his 26-ball 51-run innings as the Black Caps' made good use of the peculiar Eden Park shape to pile on the runs.

Ross Taylor too smacked 54 not out off 27 balls as Indian bowlers suffered from the onslaught. Only Jasprit Bumrah (1-31) put in a good shift with clever change of pace and control. Shardul Thakur (1-44) and Mohammed Shami (0-53) proved to be expensive in their opening spells. India were forced to use as many six bowlers in the first eight overs.

Dube (1-24) got the breakthrough with Rohit Sharma catching smartly to dismiss Guptill. It brought Williamson to the crease and the onslaught continued as he put on 36 off 24 balls with Munro.

The latter reached his half-century off 36 balls before holing out off Thakur. India quickly got a second wicket in the space of four balls with Ravindra Jadeja (1-18) dismissing Colin de Grandhomme (0). New Zealand, at 117-3 in the 13th over, were placed awkwardly but Williamson and Taylor put on 61 off 28 balls to completely decimate the Indian bowling in the second half of their innings.

Taylor smashed three fours and three sixes, taking 22 runs off Shami in the 16th over, as he raced to a 25-ball half-century. It was his first T20I half-century in six years. Williamson too completed his half-century off 25 balls. 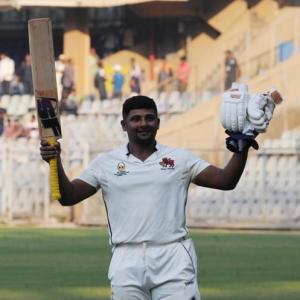