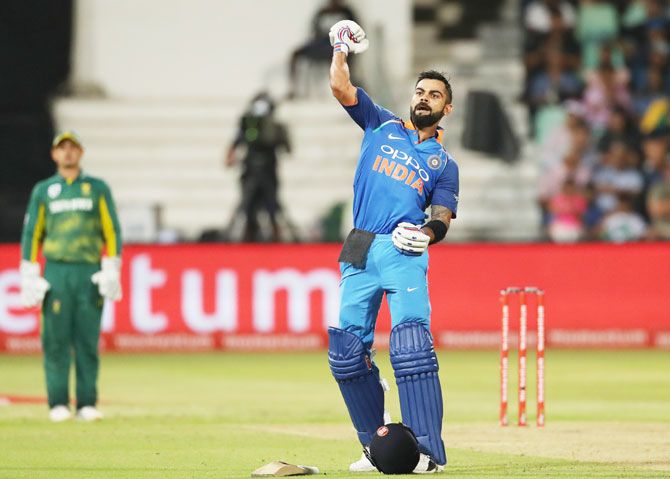 IMAGE: Virat Kohli waves to the crowd after scoring a century in the first ODI between India and South Africa, in Durban, on Thursday. Photograph: BCCI

Captain Virat Kohli scored a hundred and Ajinkya Rahane a valuable 79 as India beat South Africa by six wickets in the first One Day International and registered their first victory at Durban on Thursday.

Electing to bat, the hosts put up 269 for 8 in their 50 overs before Kohli and Rahane combined to take the game away and win with 4.3 overs to spare.

Kohli and Rahane were involved in a record 189–run third-wicket partnership. The former scored 112 of 119 balls while Rahane 79 off 86, which included five fours and two sixes.

It was the highest stand for India in South Africa as Kohli notched his 20th hundred in a run-chase, of which 18 have ended up in victories.

After scoring freely all across the world, this was also Kohli's first ODI hundred on South African soil. 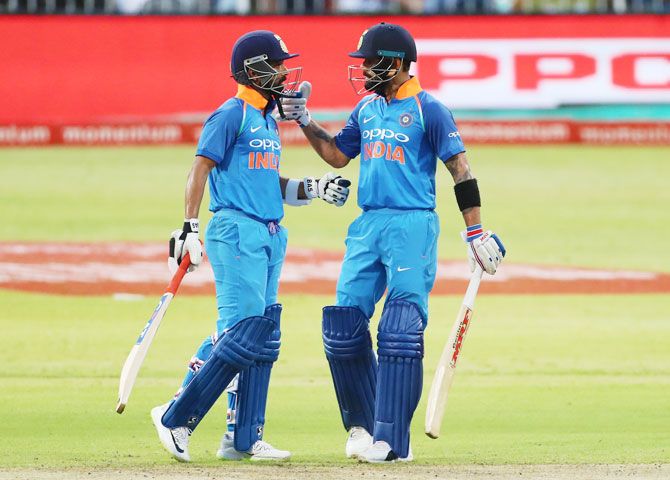 India got off to a quick start with Rohit Sharma (20) and Shikhar Dhawan (35) adding 33 for the opening wicket. Rohit looked to play his strokes but miscued one off Morne Morkel (1-35) in the seventh over and was out caught.

Dhawan and Kohli then added 34 runs for the second wicket and the duo were looking good to take advantage of South Africa's spinners, when the former was run-out.

Kohli took off for a quick single in the 13th over but Dhawan was late in responding, having taken strike, and was run-out by Aiden Markram's direct throw.

Kohli and Rahane came together thereafter and did not give the Proteas a sniff.

The most vital aspect of the Kohli-Rahane partnership was the running between wickets. The duo looked to cut down on errors, calling loud and clear. They brought up their 100-stand off 112 balls.

Rahane brought up his half-century off 60 balls as their partnership crossed 150 off only 154 balls. India reached 200 in the 36th over.

Kohli then celebrated his maiden hundred on South African soil in style, reaching there off 105 balls. In doing so, he equalled Sourav Ganguly's record of most ODI hundreds as India captain. Both now have 11 centuries, with Kohli reaching the milestone in 41 innings as compared to Ganguly's 142 innings.

Rahane was out caught in the 43rd over, while Kohli's innings ended three overs later. He walked off to a rousing reception from the Durban faithful even as the home side were subjected to a demoralizing defeat.

Andile Phehlukwayo bagged two of the four Indian wickets to fall and finished with figures of 2 for 42 from eight overs. 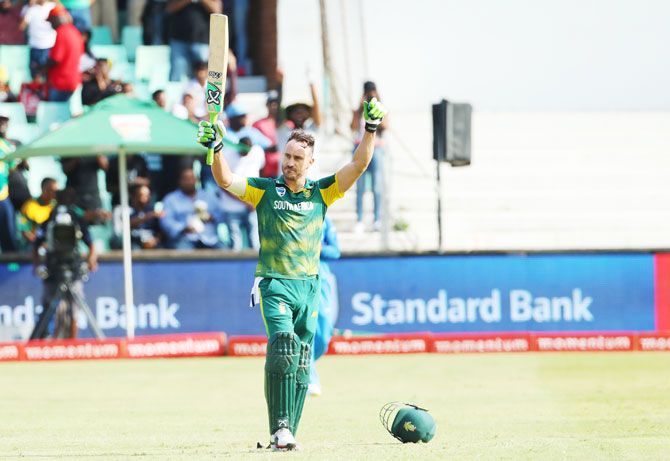 Earlier, captain Faf du Plessis led from the front with an impressive 120. He single-handedly took South Africa to 269 for 8.

in the first One-Day International against India, in Durban, on Thursday.

India's leg-spin twins Kuldeep Yadav and Yuzvendra Chahal together bagged five wickets in an impressive bowling show, but du Plessis ensured that the Proteas has a competitive total on board after opting to bat.

Du Plessis scored his eighth ODI hundred after a half-empty Kingsmead Stadium bore witness to South Africa's top-order collapse. The hosts lost four wickets for 51 runs before du Plessis and Chris Morris (37) rescued them with a 74-run partnership for the sixth wicket.

The Proteas skipper faced 112 balls, off which he hit 11 fours and two sixes.

For India, Yadav returned figures of 3 for 34 and Chahal 2 for 45, the duo excelling in their first proper overseas outing and underlining the team management's faith in leg-spin since July last year.

South Africa won the toss and opted to bat. As expected, Aiden Markram came in for injured A B de Villiers and the hosts went in with only one spinner.

India's playing eleven was along anticipated lines, with Ajinkya Rahane slated to bat at No. 4 for the first time since January 2016.

A sell-out crowd was expected for this first match of the six-ODI series but the fans -- mostly Indian supporters -- only arrived in spurts on account of a working Thursday, building up gradually over the afternoon. This is the only game of the Indian tour in Durban.

Hashim Amla (16) and Quinton de Kock (34) got off to a watchful start. The latter took his time, as he had endured a poor run of form.

At the other end, Amla looked in good nick, scoring at a strike-rate of 90-plus.

They put on 30 runs for the opening wicket before Jasprit Bumrah (1-56) struck in the eighth over. He trapped Amla plumb lbw, albeit he was lucky to have his front-foot only millimeters behind the line. 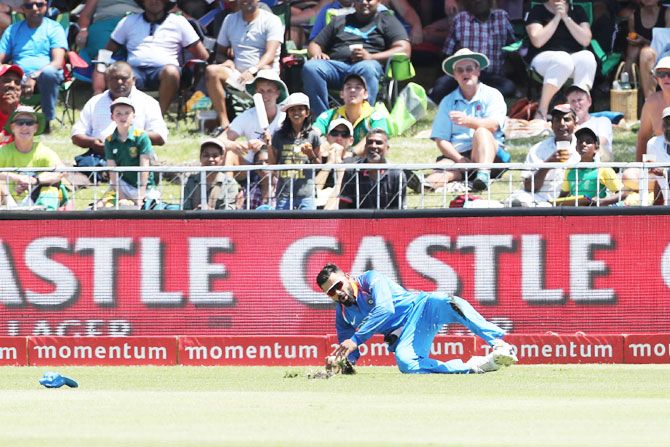 IMAGE: India captain Virat Kohli stops the ball from going to the boundary and hurts his knee in the process. Photograph: BCCI

Just before this, India had a major injury scare when Virat Kohli hurt his knee while fielding in the seventh over. He struggled with his right leg for a while thereafter, and even went off to the Indian dugout for treatment from the physiotherapist.

South Africa scored 49-1 in the first 10 overs even as Hardik Pandya (0-41) came on to bowl first-change. More importantly, though, Kohli went off the field -- this time to the dressing room to get further treatment -- in this interim as the knee niggle continued to bother him.

Meanwhile, du Plessis began his innings in attacking fashion. He put on 53 runs off 46 balls with de Kock for the second wicket. India had brought on spin from the 11th over itself as Chahal exerted control over proceedings. However, the Proteas' batsmen attacked Pandya and he was expensive in his first spell.

Chahal trapped de Kock lbw in the 15th over, and the batsman walked without bothering for a review. Had he opted for the referral, he would have survived. Du Plessis, alternately, would have been given out lbw on 18 if India had opted for DRS at the end of the 13th over.

The spinners took quick wickets thereafter and did not allow South Africa's partnerships to settle even as 100 came up in the 21st over. Aiden Markram (9) was caught off Chahal shortly after. 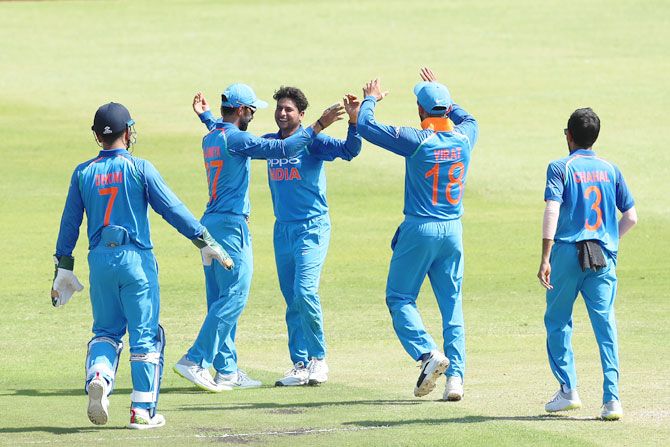 IMAGE: Kuldeep Yadav in congratulated by teammates after taking a wicket. Photograph: BCCI

Then Yadav got into the act. He bowled J P Duminy (12) with one that kept low, whilst foxing David Miller (7) into a false shot as Kohli completed a smart forward-diving catch at short extra-cover.

South Africa were reduced to 134/5 and it allowed India to bring on Kedar Jadhav (0/19) to make up for Pandya's costly early spell. However, this also allowed the sixth wicket partnership to prosper.

Du Plessis reached his half-century off 54 balls and brought up his 50-partnership with Morris off 57 balls. South Africa recovered to reach 200/5 at the end of 40 overs.

Yadav returned for a final spell to bowl Morris in the 41st over. Du Plessis though stood tall and added 56 runs for the seventh wicket with Andile Phehlukwayo (26 not out). In doing so, he brought up his century off 101 balls.

Du Plessis's knock mirrored his grinding method from Test cricket and single-handedly anchored the South Africa innings, before he was out caught in the deep off Bhuvneshwar Kumar (1/70) in the last over. The duo opened up late in the innings as 32 runs came off the last three overs.