Images from the IPL 2022 final between Rajasthan Royals and Gujarat Titans at the Narendra Modi Stadium in Ahmedabad, Gujarat on Sunday. Captain Hardik Pandya's superb all-round showing helped Gujarat Titans win the IPL 2022 title in their debut season, after they beat Rajasthan Royals by seven wickets in the final at the Narendra Modi Stadium in Ahmedabad on Sunday.

Gujarat's highly-rated bowling attack, led by skipper Hardik Pandya (3/17) himself, limited a formidable Rajasthan Royals to 130/9 after they had elected to bat.

Hardik made the difference with the ball with the crucial wickets of Sanju Samson (14), the in-form Jos Buttler (39) and the dangerous Shimron Hetmyer (11) to finish with superb figures of 3/17. 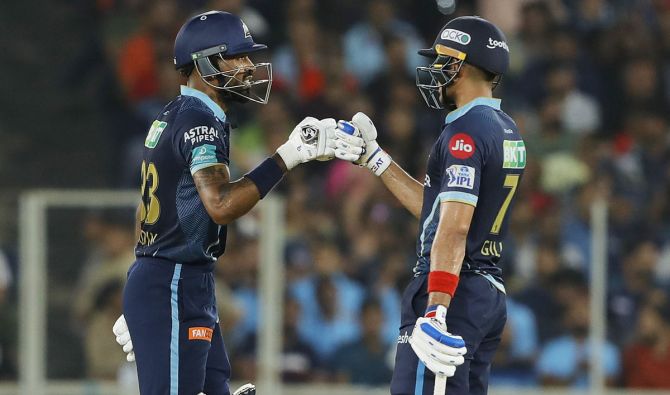 IMAGE: Hardik Pandya and Shubman Gill put on 63 runs for the third wicket to rally Gujarat Titans after a couple of early wickets. Photograph: BCCI

With the bat, Hardik steadied the ship with a vital knock of 34 from 30 balls, putting on 63 runs for the third wicket with Shubman Gill, who took his team past the winning line with a responsible knock of 45 from 43 balls. Miller ensured there were no late dramas with a quickfire 32 not out from 19 balls.

Not many gave Gujarat a chance in their first season especially after a mixed auction where they waited till the end to secure the services of wicketkeepers Wriddhiman Saha and Matthew Wade.

It was not a team studded with star players but Hardik impressed with his leadership and got the best out of his colleagues.

His performance with bat and ball also contributed immensely to the team's triumph besides the ability to bounce back from any situation through the brilliance of Miller and Rahul Tewatia. 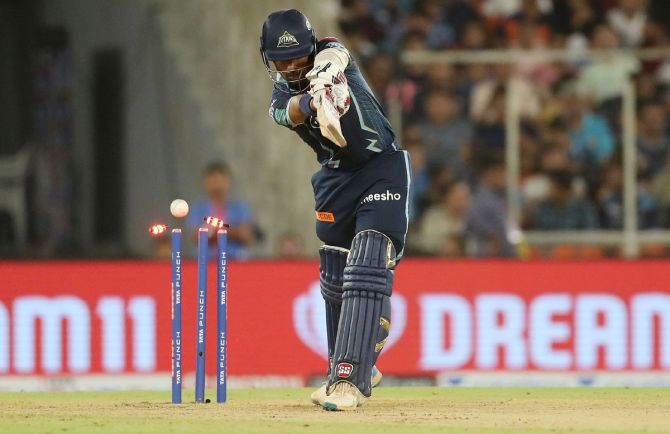 After posting an underwhelming total, Rajasthan had to produce a special effort with the ball to get back in the game.

The pace duo of Trent Boult and Prasidh Krishna were brilliant in the Powerplay, reducing Gujarat to 31/2 with Wriddhiman Saha (5) and Matthew Wade (8) back in the dugout.

Krishna got one to seam back in from good length to breach Saha's defence and crash into the stumps.

Boult, who also bowled a maiden over in his tidy spell, removed Wade. Gujarat would have been three down in the powerplay if Yuzvendra Chahal held on to a simple catch of Gill off Boult in the first over of the innings. 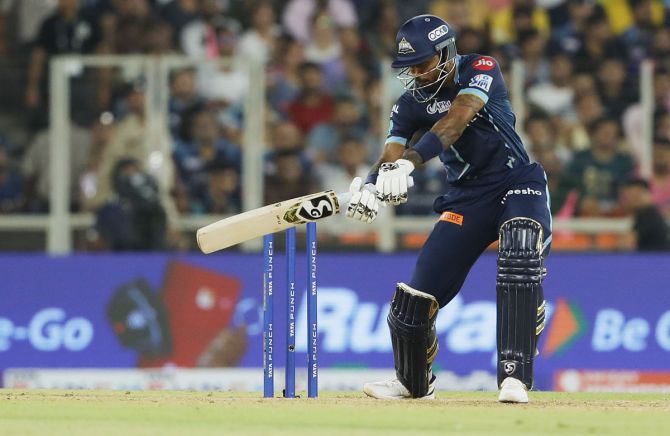 Hardik and Gill struggled to get the boundaries but never felt extreme pressure as the asking rate remained very much in control.

Ravichandran Ashwin was introduced in the 12th over and Hardik decided to go after him, hitting a four and six off successive balls to bring up the 50-run stand with Gill and put Gujarat on course for the title.

The skipper fell to a brilliant leg break from Chahal but Gill and Miller got the job done in the end. The entire stadium, housing more than a lakh people, erupted when Gill hit the winning six. 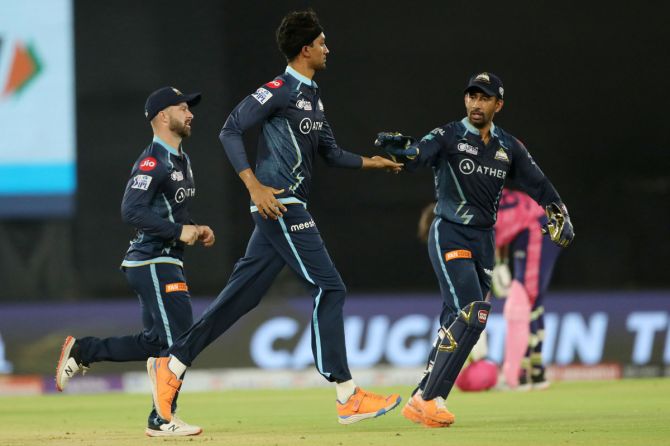 Hardik (3/17) struck thrice in his four overs while Rashid Khan (1/18) delivered yet again on the big stage to put their team on course for a title in its debut season.

Rajasthan did not have the best of starts after skipper Sanju Samson decided to put runs on the board in a big final. 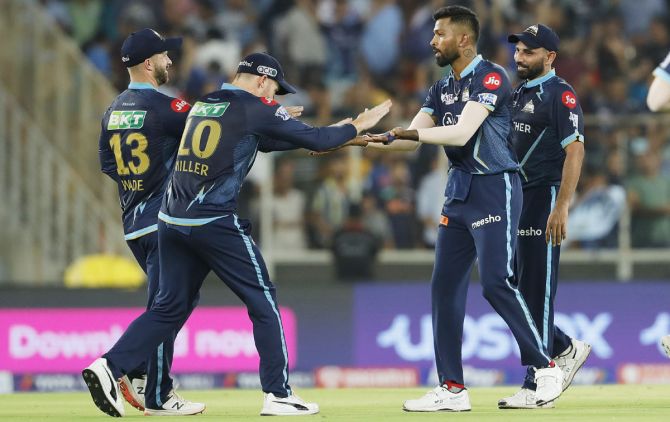 With more than a lakh supporting the home team, Gujarat bowlers were able to maintain the pressure on the opposition though Jos Buttler (39 of 35) and Yashasvi Jaiswal (22 off 16) tried their best to break free.

Jaiswal, who looked tentative against the pace and swing of Mohammad Shami, took more chances compared to Buttler at the start of the innings.

Among the shots Jaiswal attempted, his most assuring stroke was a beautifully timed six over cover off Shami. After pulling Yash Dayal for a massive six over long leg, the southpaw tried one too many and was caught in the deep. The extra bounce induced the mishit.

Buttler, who began his innings with a crisp square cut, was joined by Samson (14 off 11) in the middle. 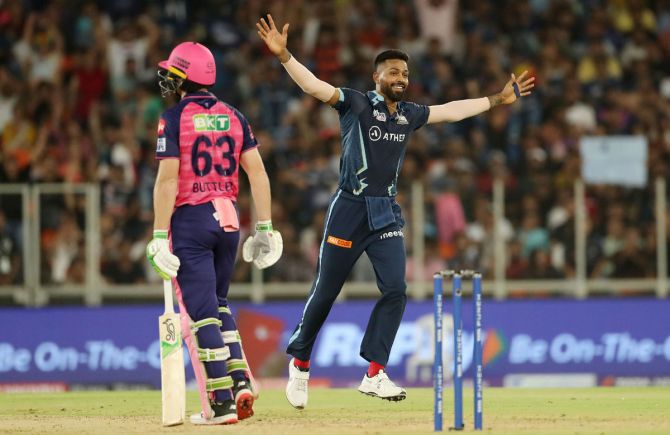 Knowing both Rajasthan right-handers struggle against Rashid Khan, Hardik brought the star spinner into the attack in the powerplay itself.

Both Buttler and Samson chose to play safe against Rashidh as Rajasthan reached 44 for one in the powerplay.

The in-form Buttler decided to force the issue as he drove Lockie Ferguson over the cover fielder before cutting him for successive boundaries.

The New Zealander was generating serious pace and went on to clock 157.3 kmph, the fastest ball of the tournament. 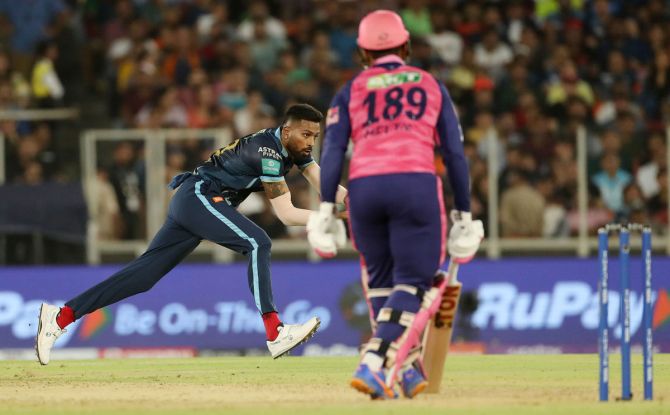 IMAGE: Hardik Pandya takes the catch to dismiss Shimron Hetmyer off his own bowling. Photograph: BCCI

Samson did not last long as his opposite number Hardik removed him on his second ball of the game. Hardik hit the hard length and Samson went for the pull shot only to be caught on the off-side, leaving Rajasthan at 60 for two in 8.2 overs.

Rajasthan's struggles worsened when Devdutt Padikkal (2), who took eight balls to get off the mark, and Buttler departed in a space of three balls.

Rashid ended the painful stay of Padikkal before Hardik got the massive wicket of Buttler. The Englishman attempted to steer one to third man but ended up edging it back to the wicketkeeper.

At the other end, new batter Shimron Hetmyer had to answer to the guile of Rashid, who was getting his googlies to rip. With Rajasthan going at run a ball after 14 overs, big hits were the need of the hour.

However, Hardik made it 94 for five by having the dangerous Hetmyer caught and bowled.

R Ashwin perished in the following over, ending all hopes of a Rajasthan fight back.

Shami ended the innings in style by castling Riyan Parag's stumps with a perfectly placed yorker.