Images from the second T20 International between India and South Africa at the Barsapara Cricket Stadium, in Guwahati, on Sunday. Suryakumar Yadav and KL Rahul slammed quickfire half-centuries as India overpowered South Africa by 16 runs despite David Miller's unbeaten century in the second T20I to clinch the thee-match series in Guwahati on Sunday.

Suryakumar Yadav continued his red hot form with a scintillating half-century, while KL Rahul also stroked a quickfire fifty as India's batters took the South African attack to post a massive 237/3 in their 20 overs.

In reply, David Miller hit a swashbuckling 106 from 47 balls, while Quinton De Kock made 69 from 48 balls as South Africa recovered after a horror start to finish on 221/3 courtesy of some late fireworks. It rained boundaries at the small Barsapara Stadium in Guwahati with the Indian batters smashing 25 fours and 13 sixes, to collect as many as 178 runs from boundaries alone.

India, who won the first match by eight wickets, sealed the three-match series 2-0 for their first-ever T20I home series win against South Africa.

Arshdeep Singh gave India a perfect start while defending 237, extending the run of ducks of South African skipper Temba Bavuma and Rilee Rossouw to two matches. The young pacer, however, leaked runs at the death overs, giving away 26 runs in the 19th over, to return with expensive figures of 2/62.

South Africa stumbled to 1/2 in the second over after Arshdeep's twin strikes. He put on an unbroken stand of 174 from 84 balls with Quinton de Kock, who played a sedate innings of 48 from 69 balls. Opener de Kock was struggling on 32 from 33 balls before he finally cut loose in the 15th over, hitting spinner Axar Patel for two sixes and a four in the 15th over.

Miller also went after the young Arshdeep, hitting the left-armer for two sixes and as many fours in the penultimate over. He slammed Axar for back to back sixes over long-on to bring up his second T20I century in grand style from just 46 balls.

Despite the victory, India's bowlers once again struggled in the death overs, with 57 coming from the last three overs. 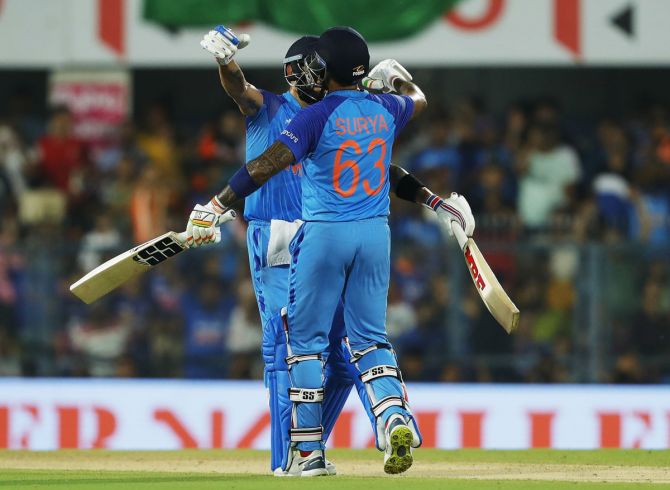 Rahul was back at his aggressive best, slamming a 24-ball fifty, his second in a row, as he and Rohit put on 96 runs for the opening wicket from just 59 balls after South Africa had elected to bowl.

Suryakumar continued to raise his standards higher with a third successive half-century that came off just 18 deliveries as India raced past the 200-mark in the 18th over. 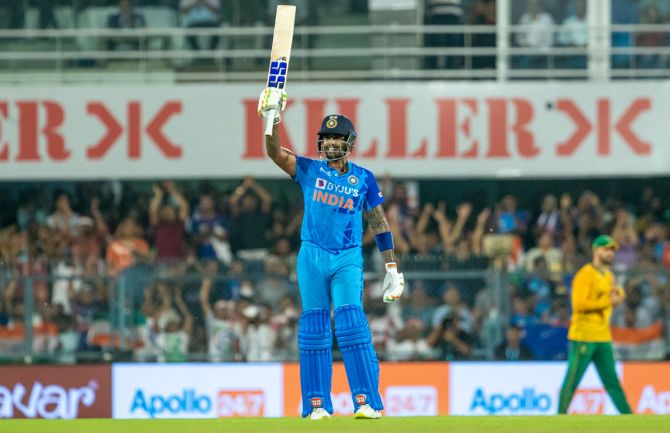 Karthik, playing the role of finisher, got just seven balls but he made the most of the opportunity, smashing two sixes and one four in his quickfire 17 not out.

The South African pacers looked lacklustre on a flat pitch, bowling full and wide to be taken away for boundaries regularly.

After being hit on his hand from Wayne Parnell in the second over while trying to pull, Rohit came out all guns blazing while Rahul was a mute spectator with nine from five balls. IMAGE: Virat Kohli continued his recent good form with the bat with an unbeaten 49. Photograph: BCCI

It was then the turn of Rahul who whipped the ball over square leg with perfect demonstration of his wrist work.

It was a shot that summed up his dominating innings as he took on Anrich Nortje in a similar fashion, this time whipping the bowler for another maximum.

There was no signs of tentativeness in Rahul's batting that had copped much criticism recently, as he hit part-time spinner Aiden Markram for a six over long-on to bring up his fifty. India's openers made most of the Powerplay, as they reached 57 for no loss in six overs before the middle order cashed in.

In a rare sight, the snake slithered out onto the field from the extra cover region to stop play for about five minutes before the groundsmen captured it in a bucket. 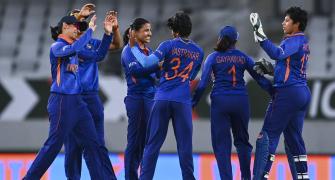 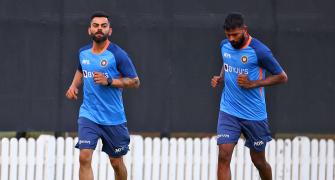 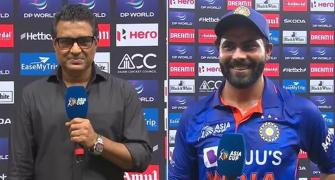 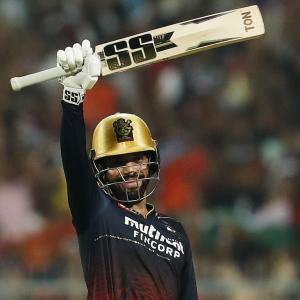