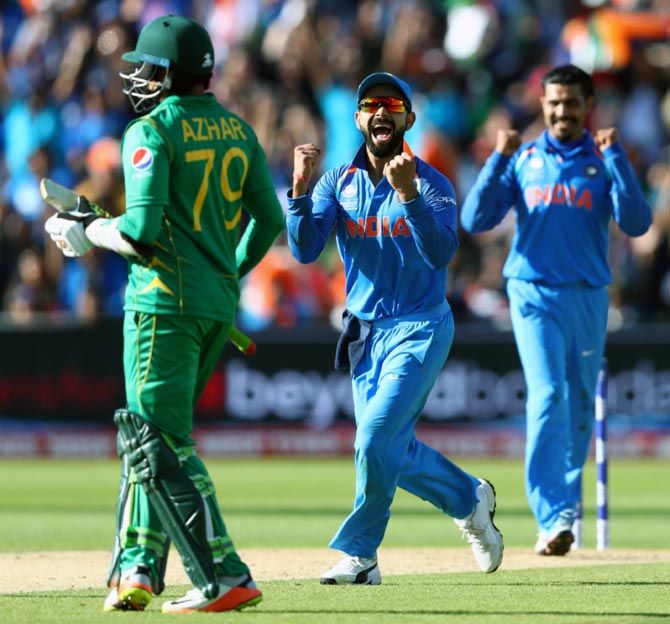 India launched their campaign in the Champions Trophy with a resounding 124-run victory over Pakistan, in Birmingham on Sunday, extending their dominance over the arch-rivals in major International Cricket Council tournaments.

Put in to bat, defending champions India notched up a competitive 319 for three after two rain interruptions reduced the match to 48 overs a side at the Edgbaston.

Set a revised target of 324 in 48 overs at the start of their innings under the Duckworth-Lewis method, Pakistan were required to chase 289 in 41 overs when play resumed after the day's third rain interruption.

The task proved too much for Pakistan, who were bowled out for 164 in 33.4 overs. 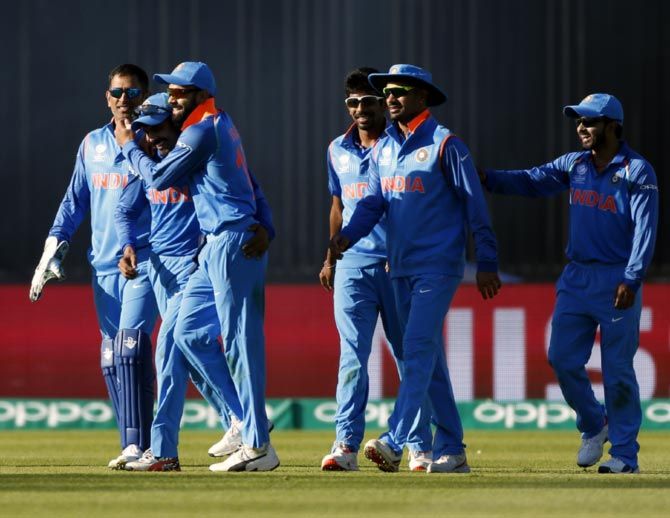 Following the latest result, the teams are locked at 2-2 in the Champions Trophy, but it is India who have won 10 out of the 11 contests at the World Cup and World T20 tournaments between the two sub-continent rivals.

While India were clinical with both the bat and ball, their fielding left a lot to be desired, and Pakistan were worse than the men in blue, giving Yuvraj Singh three lives, besides being sloppy with ground fielding.

When on 37, Azhar Ali was dropped by Bhuvneshwar Kumar running in from long-on.

Hasan Ali's dismissal by pacer Umesh Yadav (3/30) signalled the end of what was a much-anticipated match, as Wahab Riaz could not bat due to a twisted ankle. 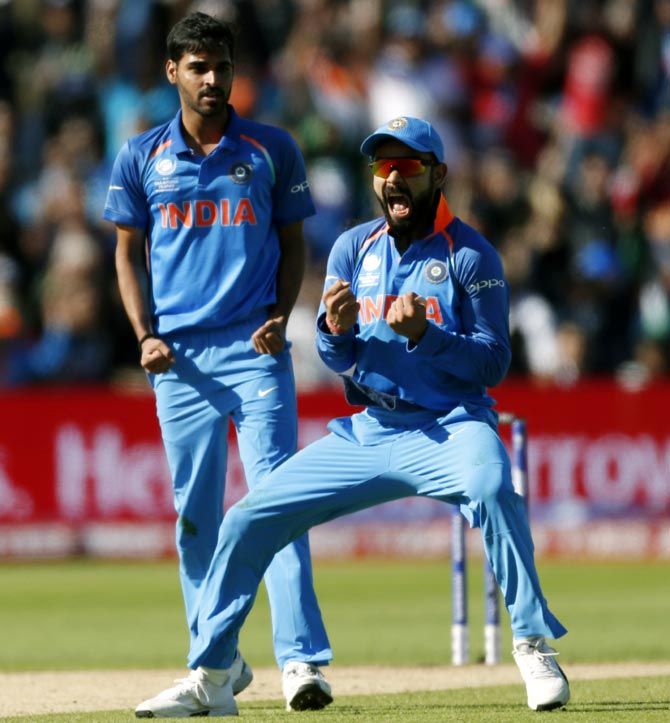 Pakistan were never really in the game, losing wickets at regular intervals after a 47-run stand for the first wicket between Azhar Ali (50) and Ahmed Shehzad (12).

Mohammad Hafeez made 33, while the experienced Shoaib Malik, who looked in good nick during his brief stay in the middle, was run out by a brilliant Ravindra Jadeja direct throw from backward point. 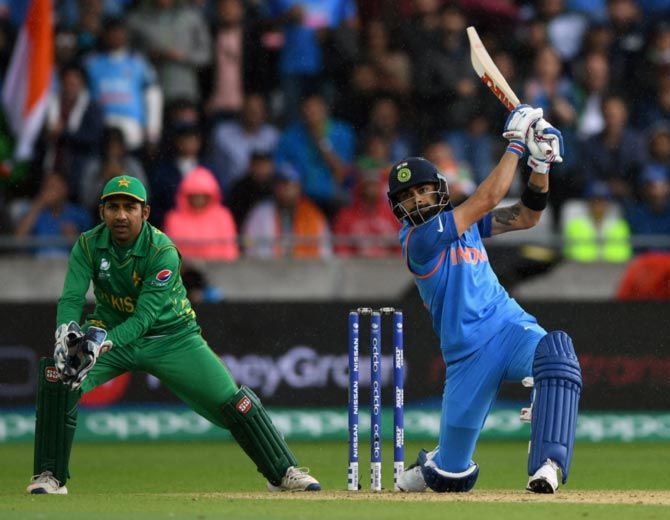 India's batsmen remained focussed despite the rain breaks with Rohit Sharma (91 off 119), Shikhar Dhawan (68 off 65), Virat Kohli (81 not out off 68) and Yuvraj (53 off 32) rising to the occasion in a game reduced to 48 overs a side following two rain intervals.

Thanks to the big hitting by Yuvraj, Kohli and Hardik Pandya at the death, India amassed 72 runs in the last four overs with the 46th and 48th going for 21 and 23 runs.

The revised target for Pakistan via the Duckworth-Lewis method is 324 in 48 overs. 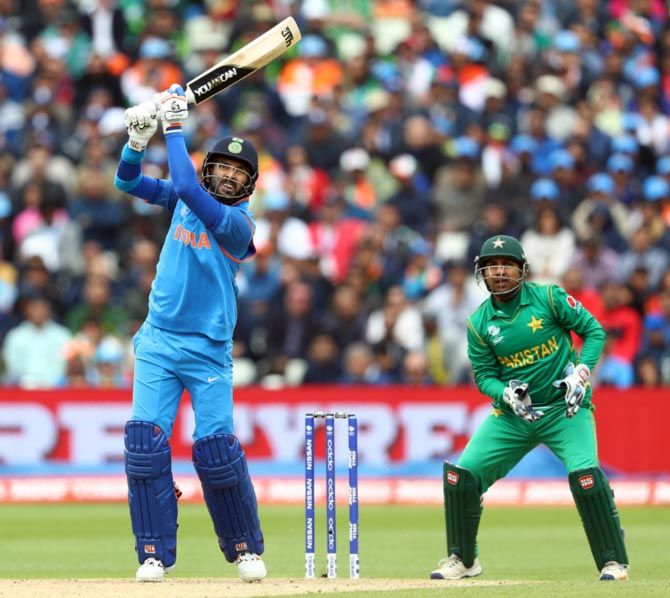 In a match watched by the legendary Sachin Tendulkar from the stands, Indian batsmen went on the rampage in the death overs after patiently seeing off two rain breaks.

Play was stopped first when India were 46 for no loss in the 10th over and rain played spoilsport again when they were 173 for one in the 34th over with Rohit and Kohli going strong in the middle overs.

It was not surprising that Sarfraz Ahmed sent India in to bat after winning the toss under overcast conditions at the Edgbaston stadium. 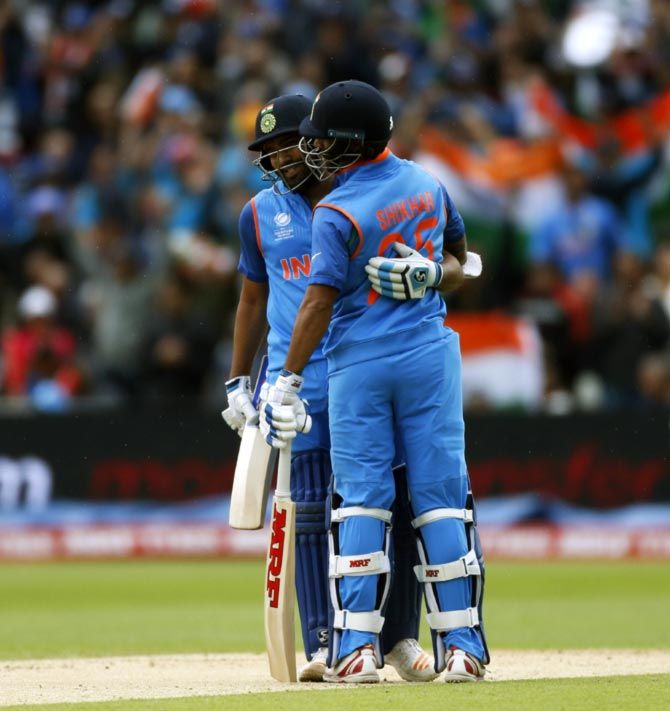 The atmosphere around the ground was electric though the day began on a sombre note with players of both teams observing a minute's silence for the people killed in Saturday's terror attack in central London.

The start of the Indian innings increased the excitement levels by a few notches with a charged-up Mohammad Amir beating Rohit's bat three times in what turned out to be a maiden over.

It was a cautious start by both the openers with just 15 coming in five overs.

Amir's first spell of four overs was exceptional as he gave away 14 runs and was a tad unlucky to not get a wicket. 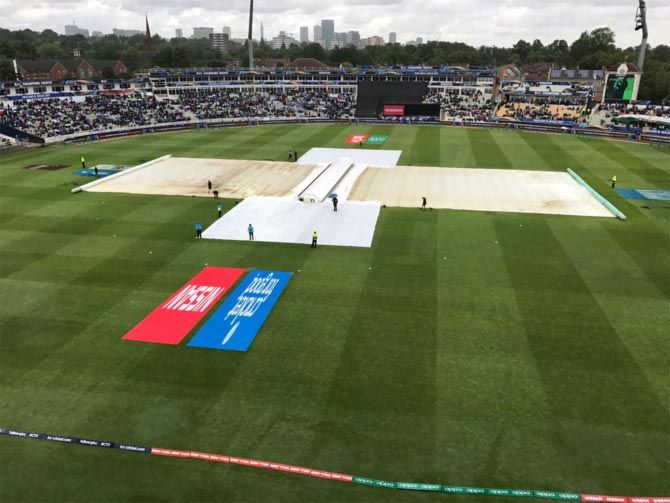 Skipper Ahmed started with the pace of Amir and left-arm spin of Wasim. Though Wasim was economical, facing a spinner early on released the pressure on Rohit and Dhawan with Amir cranking up good pace at the other end.

The experienced duo then played their strokes, especially Rohit, who exquisitely punched through the off-side. He brought his fifty by depositing spinner Shadab Khan over deep mid-wicket for a six. The stylish batsman was playing in his first international game since October last year, having undergone a thigh surgery in November. 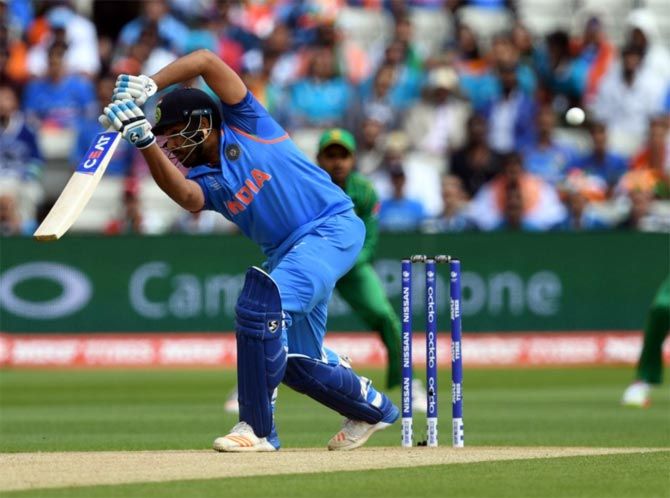 After Rohit reached his half-century, Dhawan too changed gears as he smashed pacer Wahab Riaz for three successive fours before completing his half century.

After the fall of openers, Kohli and Yuvraj drove India's innings forward quite well in the middle overs. While Kohli was scratchy for a major part of his innings, Yuvraj was in full flow from the word go, hitting the Pakistani bowlers to all parts of the ground. 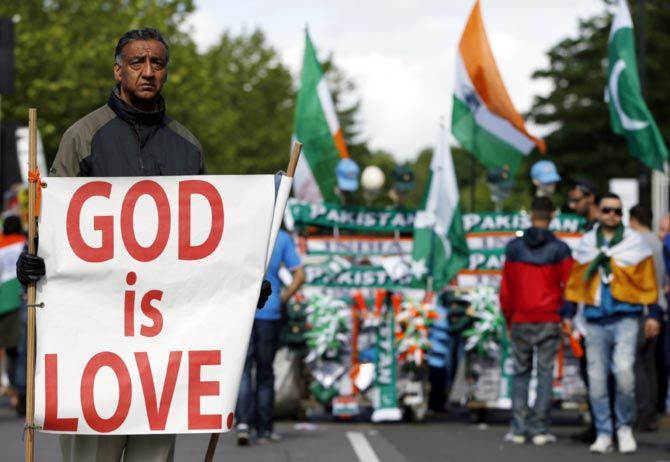 IMAGE: Fan with banners outside the ground in wake of the Saturday's terror attack in London. Photograph: Paul Childs/Reuters

The stylish southpaw hit eight crisp boundaries and a six in his entertaining knock, while Kohli made up for a sluggish start with a late flourish, ending with six fours and three sixes.

Pakistan were ordinary on the field with Hasan Ali guilty of dropping Yuvraj when he was on nine. A little later, substitute Fakhar Zaman dropped Kohli on 43, which eventually ended up hurting Pakistan badly. 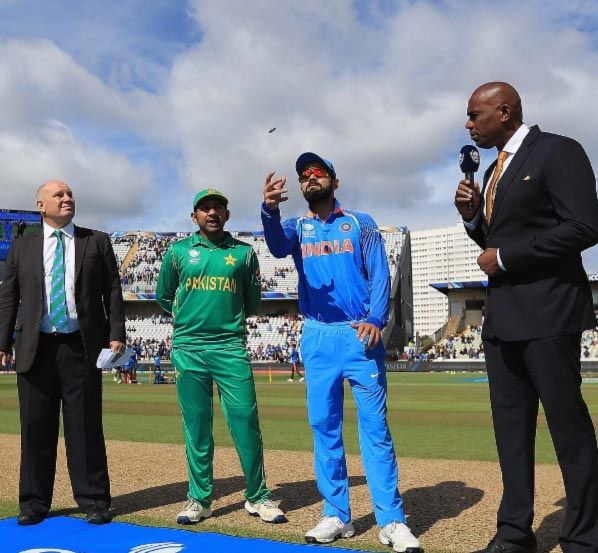 Earlier, Pakistan won the toss and elected to field. India went in with five specialist bowlers including all-rounder Hardik Pandya with Ravichandran Ashwin and Mohammad Shami missing out.

Among the batsmen, Kedar Jadhav was picked ahead of Dinesh Karthik. 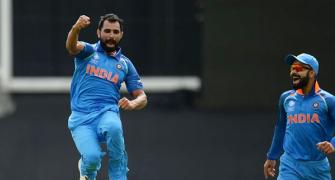 Gavaskar baffled at his integrity being questioned 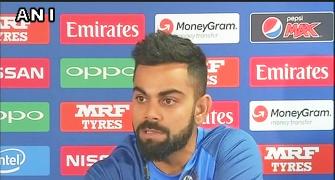 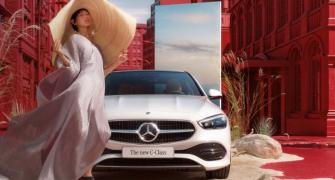 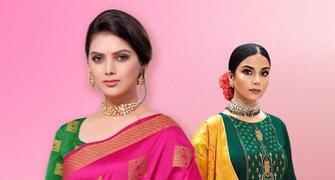 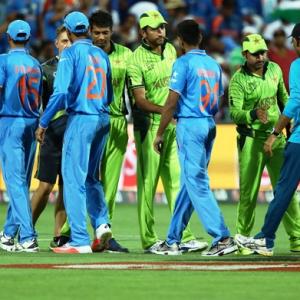 The 'P-factor' is crucial in an Indo-Pak tie: Bhajji 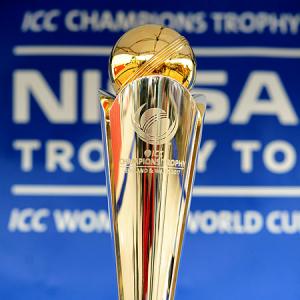