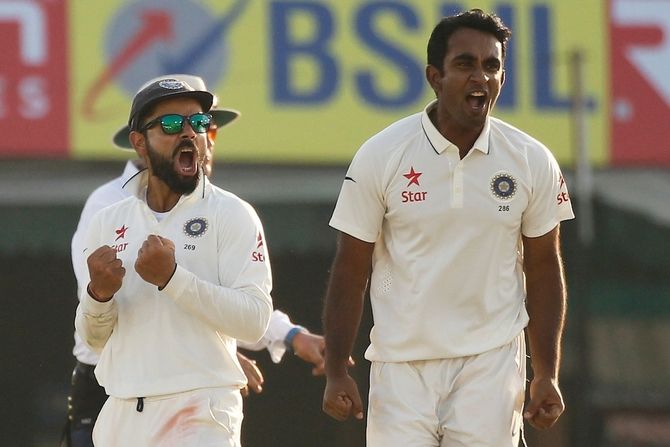 Jonny Bairstow's composed 89 helped England survive some atrocious top order shot-making and reach 268 for eight at close of play on the first day of the third Test against India on Saturday.

Alastair Cook won an important toss but the tourists conceded much of the advantage with poor shot selection and could have been in a deeper hole but for India's poor catching and Bairstow's dogged resistance.

The keeper-batsman featured in 50-plus partnerships with Ben Stokes and the recalled Jos Buttler to revive England, who are 1-0 down in the five-match series. 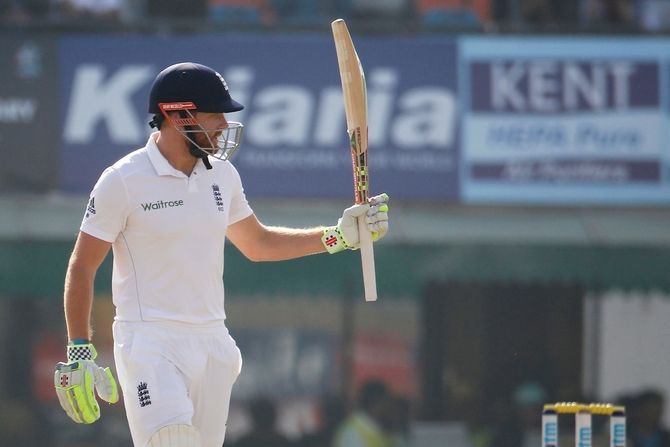 IMAGE: Jonny Bairstow of England celebrates his half century against India. Photograph: BCCI.

Adil Rashid was batting on four at stumps with Gareth Batty, replacing the injured Zafar Ansari, yet to open his account.

Wary of batting fourth on a spinning track, Cook asked the hosts to bowl but his top order were unable to vindicate the decision at the Punjab Cricket Association Stadium. 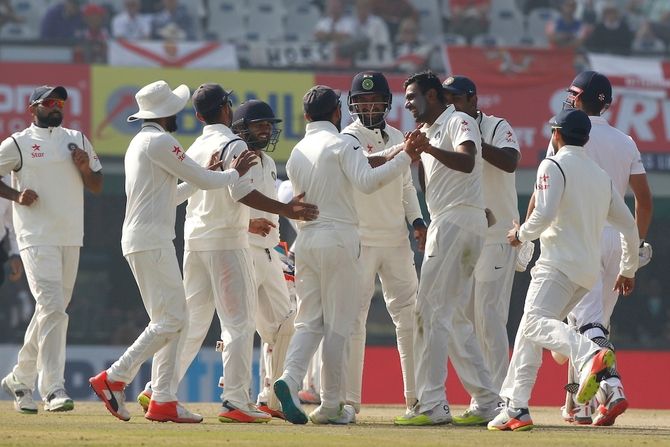 Paceman Umesh Yadav drew first blood when he got Haseeb Hameed caught for nine at gully with a delivery that kicked up off a length.

Home captain Virat Kohli introduced spin in the 13th over and Jayant Yadav responded by dismissing Joe Root for 15 in his second over.

England's batting mainstay fluffed a pull shot across the line and was trapped leg-before to a perfectly innocuous delivery from the off-spinner.

Cook, meanwhile, led a charmed life at the other end with Ravindra Jadeja failing to pouch an edge and Ravichandran Ashwin spilling a sitter. Mohammed Shami was the luckless bowler on both occasions. 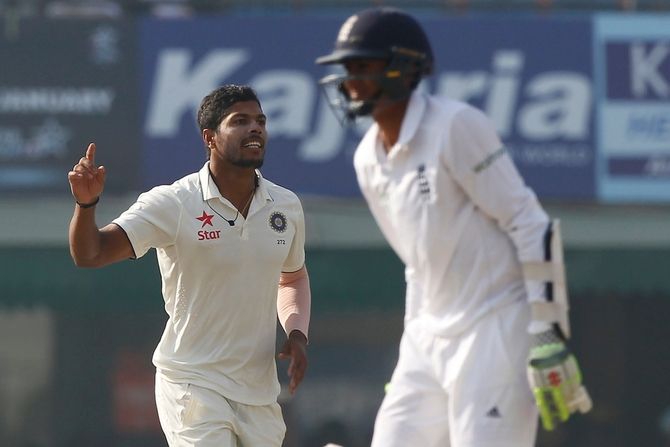 Ashwin redeemed himself 10 minutes later with his very first delivery, which Cook edged to wicketkeeper Parthiv Patel. Cook made 27 but his dismissal came from a rash shot chasing a wide delivery.

Shami finally tasted success when he bounced out Moeen Ali for 16 but Bairstow and Stokes steadied the innings with a 57-run stand before another touring batsman decided to throw his wicket away.

Stokes, on 29, marched down the pitch to Jadeja only to miss the ball and Patel, replacing the injured Wriddhiman Saha behind the stumps, had all the time in the world to whip off the bails.

Bairstow teamed up with Buttler to add 69 runs for the sixth wicket in a relatively more productive second session. 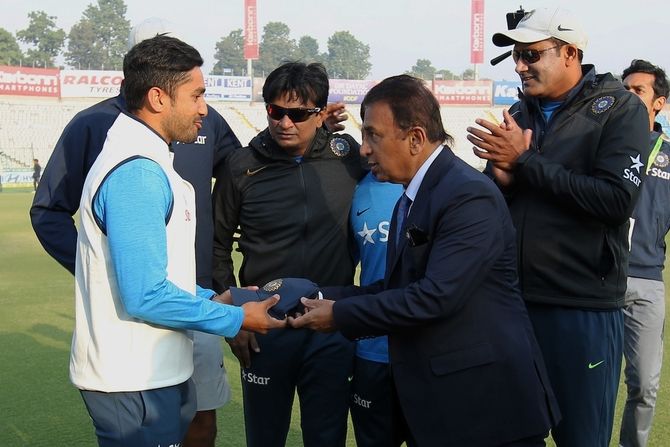 Buttler fell for 43, when he trotted out to chip Jadeja to Kohli at extra cover in yet another soft dismissal.

The right-hander missed his half-century but still scored 25 more runs than Ben Duckett, who he replaced in the side, amassed in his three innings in India.

Bairstow got a reprieve when Patel dropped him off Yadav but the off-spinner trapped the batsman lbw with the very next delivery.

England reviewed the decision but Bairstow's 260-minute vigil, during which he faced 177 balls and hit six boundaries, was over.