Images from the Asia Cup final between India and Bangladesh in Dubai on Friday. 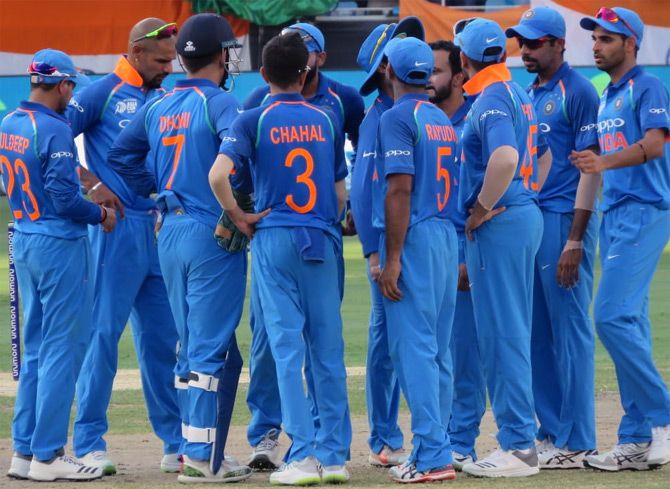 IMAGE: India's players celebrate the fall of a Bangladesh wicket during the Asia Cup final in Dubai. Photograph: BCCI/Twitter

A severely hamstrung Kedar Jadhav held his nerve in the closing stages, while the lower order made vital contributions with the bat as India edged past Bangladesh by three wickets to win their seventh Asia Cup title in a pulsating last-ball finish, in Dubai on Friday.

Chasing a modest target of 222, India made a rough weather of the chase at 160 for five with Jadhav (23 not out) initially retiring after pulling his right hamstring only to comeback when it mattered the most.

He came out in the 48th over with India still needing 11 runs. With six runs needed off the last over, Jadhav and Kuldeep Yadav kept their cool against part-timer spinner Mahmudullah Riyadh taking three singles and double off the first five balls. The part-time off-spinner drifted the final delivery onto Jadhav's legs as it brushed his pads for a leg bye to ensure India maintained its supremacy among the continental neighbours.

The win also establishes Rohit Sharma's leadership skills having won the Nidahas T20 tri-nation earlier and now the Asia Cup while providing a healing touch after the 4-1 drubbing in the Test series in England. It was Bhuvneshwar's six off Rubel Hossain in the 46th over followed by a bounday off Mustafizur Rahman in the next over which eased the pressure at the end.

India started the chase with Shikhar Dhawan (15) and Rohit Sharma (48) helping themselves to a boundary each off Mehidy Hasan Miraz's off-break in the opening over. However, tournament's top scorer Dhawan threw his wicket away as he lofted left-arm spinner Nazmul Islam straight into the hands of the fielder at mid-off.

Ambati Rayudu, who had not performed against the top teams, failed again making it 46 for two after he was caught behind off Mashrafe Mortaza for two.

In-form skipper Rohit continued from where he had left against Pakistan as he lofted Nazmul for a six over long-on. A short-arm pull off Mustafizur Rahman and a hook off Rubel Hossain also got him two more sixes as India were cruising along at 83 for two.

It was another short ball from Rubel Hossain, which caused Rohit's downfall as he attempted the pull but was caught at deep square leg.

Dinesh Karthik (37) hit a six but looked edgy during his 61-ball stay before being he was trapped leg before wicket by Mahmudullah Riyadh.

Dhoni struggled to get going and consumed a lot of balls, hitting three boundaries in between during his painstaking innings of 36 from 67 balls.

Kedar Jadhav started off positively as he hit a straight six off Mahmudullah but then pulled his right hamstring going for a quick single.

He was in considerable pain after that and Dhoni who was just getting into the groove lost his rhythm and edged one off Mustafizur Rahman to Mushfiqur Rahim behind the stumps.

Once Dhoni was gone, things became troublesome for India at 160 for five as Jadhav continued to hobble.

He was finally instructed to get off the field as his presence was hampering the other batsmen from taking quick singles or twos.

Jadeja and Bhuvneshwar's partnership kept India in control as they kept the runs coming at a good rate before the former was caught behind off Rubel for 23, forcing Jadhav to walk out to the middle.

Bhuvneshwar fell caught behind to Mustafizur in the 49th over but Kuldeep and Jadhav kept their composure in a pressure situation to take their team to a thrilling win. India's spin duo of Kuldeep Yadav and Kedar Jadhav wreaked havoc after opener Liton Das's fine hundred as Bangladesh were bowled out for a modest 222 in the final of the Asia Cup in Dubai on Friday.

An injury-ravaged Bangladesh made a flying start, courtesy Liton's maiden ODI hundred, who stroked 121 off 117 balls, putting on 120 runs for the opening wicket with Mehidy Hasan (32).

But India's bowlers staged a great comeback with wickets at regular intervals as Bangladesh suffered a batting collapse in the middle overs, losing 10 wickets for 102 runs. They were cruising on 116 for no loss after 20 overs.

Chinaman spinner Kuldeep's three for 45 was well complemented by Jadhav's two for 41 in nine overs of unconventional off-breaks, as Bangladesh frittered away the initiative with poor shot selection.

Mahendra Singh Dhoni's smart work behind the stumps also played its part as much as did Ravindra Jadeja's electric fielding inside the 30-yard circle.

Promoting lower-order batsman Hasan as the opener proved to be a masterstroke by captain Mashrafe Mortaza, who wanted to preserve his regular opener Imrul Kayes and Soumya Sarkar. Hasan did his job perfectly by dropping anchor as Das hit a flurry of boundaries off Jasprit Bumrah and Bhuvneshwar Kumar, hitting quite a few fours through the leg side early on.

When Yuzvendra Chahal was introduced, he was hit over deep midwicket for a six, as India struggled to get the early breakthrough.

However, things changed once Hasan was caught by Ambati Rayudu in the cover region off Jadhav's bowling.

Bangladesh couldn't force the pace as the part-time spinner mixed his deliveries well. He bowled an impressive 28 dot balls to ramp up the pressure in the middle overs.

Imrul Kayes (2) was adjudged leg-before off Chahal and the in-form Mushfiqur Rahim (2) pulled a rank half-tracker from Jadhav straight to the fielder at deep midwicket. From 120 for no loss, Bangladesh slumped to 137 for three and things went from bad to worse from thereon.

Mohammed Mithun (2) was the next to go. Jadeja dived full stretched to stop a cover drive from Das and then threw the ball back to the non-striker's end after watching Mithun halfway down the pitch.

Mahmudullah (4) played across the line off Kuldeep and Bumrah took a well-judged catch at the deep midwicket.

Das, who carried manfully by hitting 12 boundaries and two sixes, was brilliantly stumped by Dhoni after he was beaten by Kuldeep's googly.

Mortaza tried to hit a few boundaries at the end as he gave Kuldeep the charge but missed and he was also dismsised stumped.stumped by Dhoni. 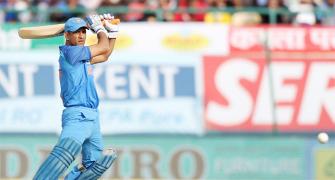