Images from the fifth One-Day International between India and Australia in New Delhi on Wednesday. 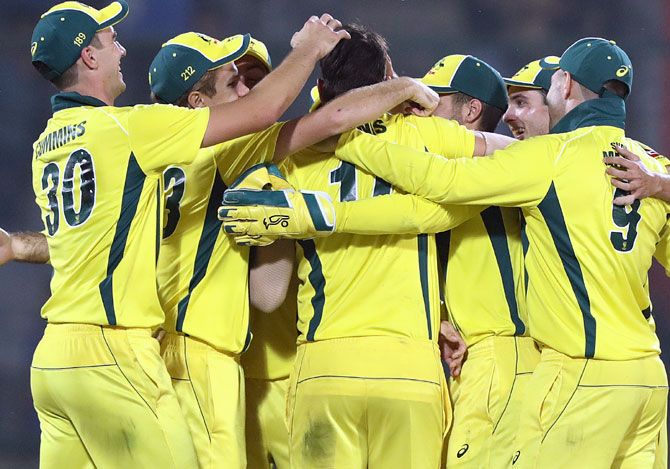 India's quest to find the right combination for the upcoming World Cup ended with a 35–run defeat in the decisive fifth ODI against Australia as they lost the series 2-3, in New Delhi, on Wednesday.

In what was their last game before the showpiece event in United Kingdom, the Indian innings finished on a disappointing 237 after Australia had put on board 272 for nine, built around Usman Khawaja's fine century.

It was an amazing comeback from Australia to win the ODI series after they were beaten in the first two games. Australia thus completed the limited overs double over India, having earlier won the T20I series 2-0.

It was India's first ODI series defeat at home since losing to South Africa in 2015 as their big guns fell silent on the day when the series was on line. 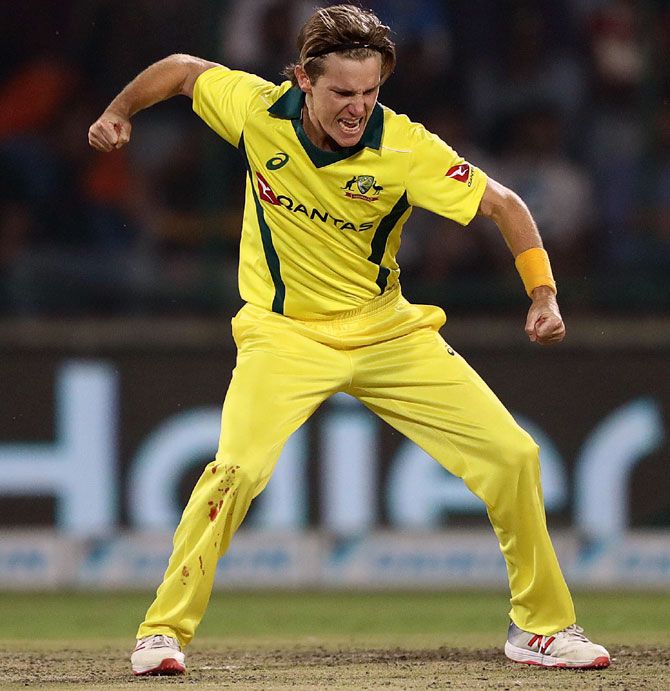 India also became the only side in the world to lose an ODI series twice after leading 2-0.

Opener Khawaja continued his good form, as he stroked 100 -- his second century of the series --  before India's bowlers did well in the middle overs to restrict the visitors to 272 for nine.

But India struggled with the bat, with only Rohit Sharma (56) going past the 50-run mark, as they finished on a disappointing 237 all out.

India made a strange decision to keep out both KL Rahul and Ambati Rayudu and the youngsters Rishabh Pant and Vijay Shankar failed to make an impression with the bat, with both only managing 16 each.

The Australian spin trio of Adam Zampa, Nathan Lyon (1/34) and part-timer Glenn Maxwell (0/34) kept the Indian batsmen on a tight leash in the middle overs. 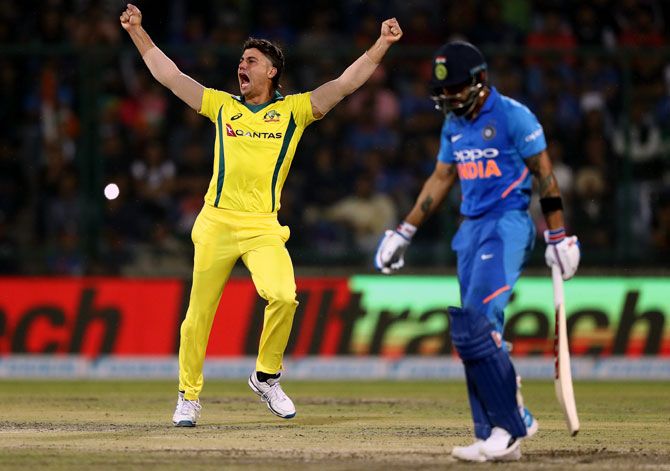 Zampa was brilliant with the ball, taking three for 46, while Pat Cummins, Jhye Richardson and Marcus Stoinis picked up two wickets each.

Kedar Jadhav (44) and Bhuvneshwar Kumar (46) hit a few strokes towards the end to briefly ignite India's hopes with a 91-run stand for the seventh wicket.

But Cummins ended India's hopes with the wicket of Bhuvneshwar and Jadhav was snapped up in the very next over by Richardson.

Australia, who were trailing 0-2 initially, made a remarkable comeback to grab their first ODI series win in India since 2009. It is only the fifth instance that a team has won a series after being down 0-2. 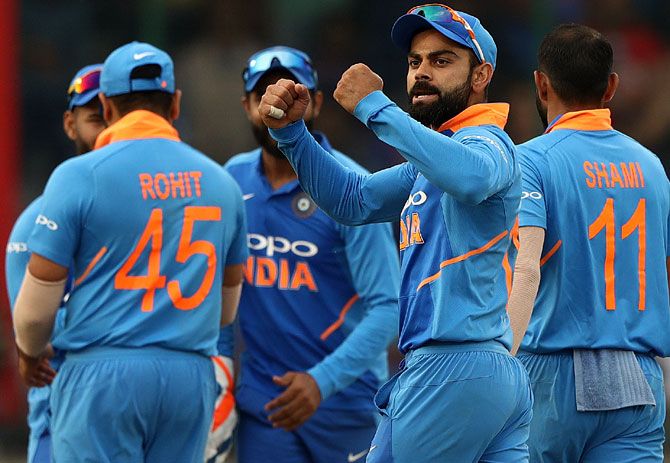 Earlier, Khawaja hit a century before India's bowlers struck at regular intervals to limit Australia to 272 for nine in the series-deciding fifth and final ODI in New Delhi.

Khawaja continued his good form, as he stroked 100 -- his second century of the series but his dismissal saw Australia lose their way with wickets falling at regular intervals.

Bhuvneshwar Kumar triggered the collapse with the key wicket of Khawaja to finish with good figures of three for 48. Mohammed Shami and Ravindra Jadeja claimed two wickets each to lead India's strong comeback with the ball.

Electing to bat, Khawaja had given Australia a good start as he put on 75 runs for the opening wicket with Aaron Finch (27) before adding 99 for the second wicket with Peter Handscomb, who stroked 52. 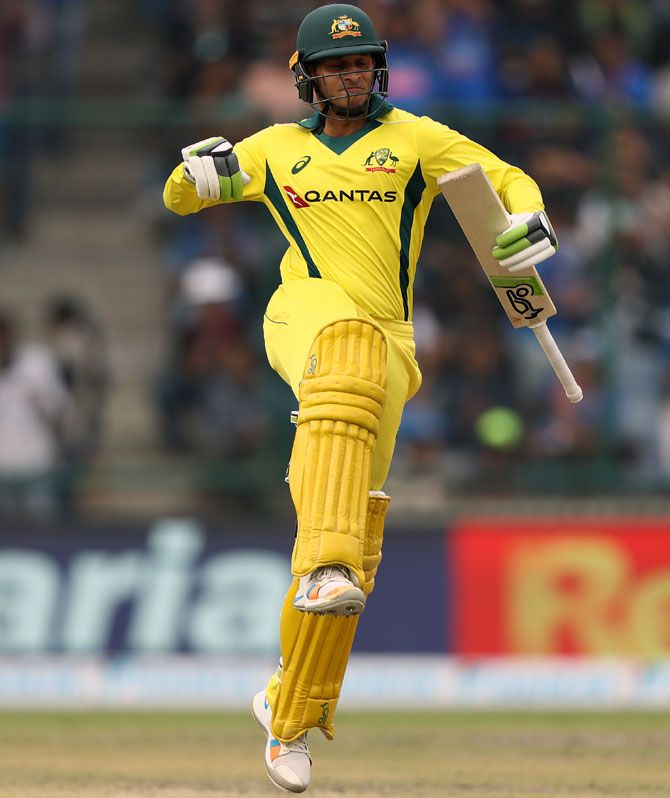 Following Khawaja's wicket, Australia lost six wickets for 54 runs before Jhye Richardson came to the rescue at the end with a quickfire 29 from 21 balls.

India had made two changes for this match with Mohammed Shami and Ravindra Jadeja coming for Yuzvendra Chahal and KL Rahul.

Khawaja was yet again impressive with his footwork, handling the Indian spinners nicely before being caught at shot extra cover by Kohli off Bhuvneshwar Kumar after he had hit 10 fours and two sixes. 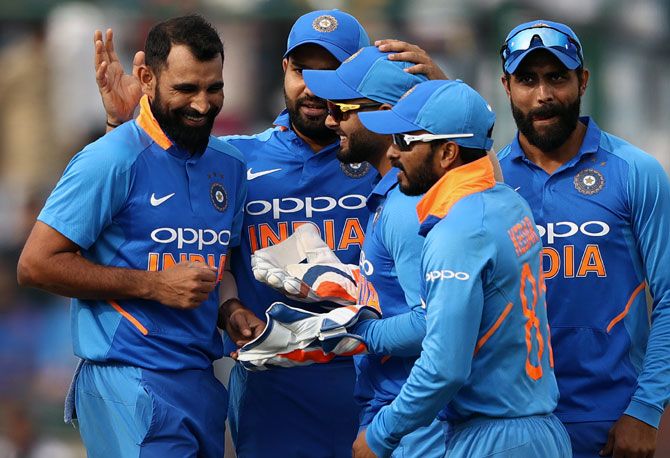 Jadeja then got rid of Glenn Maxwell (1) and Shami sent back Handscomb as Australia lost three wickets in the space of 14 balls.

The tide turned in India's favour with Australia managing just 27 runs in overs between 34 and 40.

Jadeja, who replaced Yuzvendra Chahal, made a strong case for himself for inclusion in the World Cup squad with impressive figures of two for 45 in 10 overs.

Jasprit Bumrah was exceptional in his first eight overs giving just 14 runs but Jhye Richradson (29) spoilt his figures by creaming off four boundaries from his ninth over, providing one last push to Australian innings.

It turned out to be a forgettable day for chinaman Kuldeep Yadav who bled 74 runs in his 10 overs but dismissed dangerous Ashton Turner (20) cheaply. 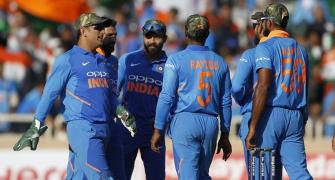