Images from the third One-Day International between India and Australia in Ranchi on Friday. 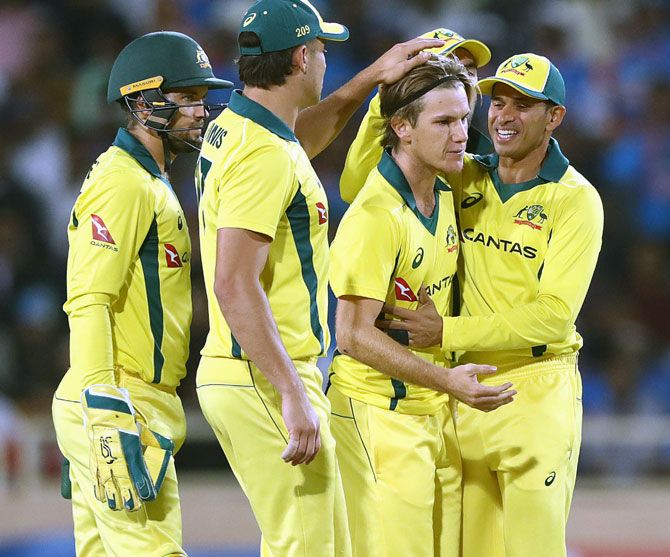 Virat Kohli looked like a 'Man on a Mission' wearing the camouflage army cap for the better part of his 41st ODI hundred but that wasn't enough to prevent India from losing the third ODI against Australia by 32 runs in Ranchi, on Friday.

It was yet another superlative effort from the Indian skipper, who lacked adequate support from the other end as Australia kept the five-match series alive going into the fourth game in Chandigarh on Sunday.

Kohli scored his first 50 off 52 balls and the next 50 off just 33 balls which was sheer class as always. The acceleration was so sudden that it even took the Australian attack by surprise. 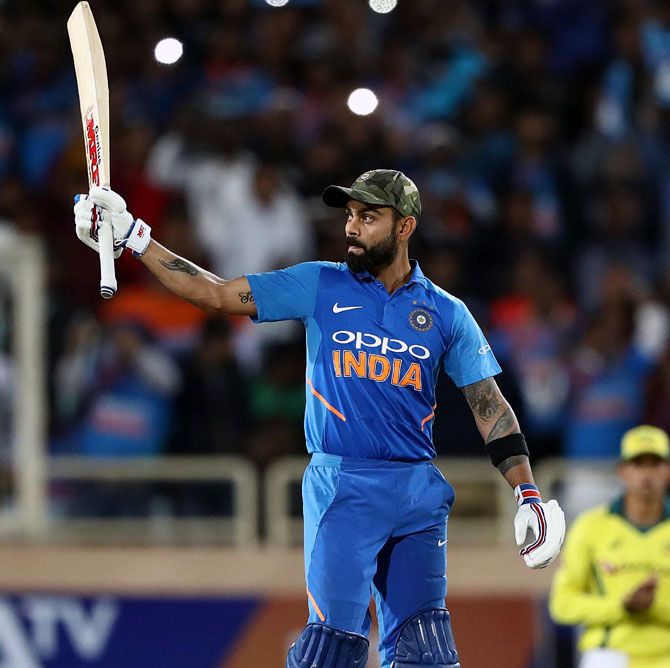 He launched a brutal assault on the Australian bowlers. The true nature of the pitch helped him hit through the line as he smashed 16 fours and a six.

However, Adam Zampa ended India's hopes with the big wicket of Kohli after he had earlier accounted for veteran Mahendra Singh Dhoni (26), to finish with three for 70.

Kohli had three significant partnerships -- 59 with Dhoni for the fourth wicket, 88 with Kedar Jadhav for the fifth wicket and 45 with Vijay Shankar for the sixth -- but none good enough to take India across the line. 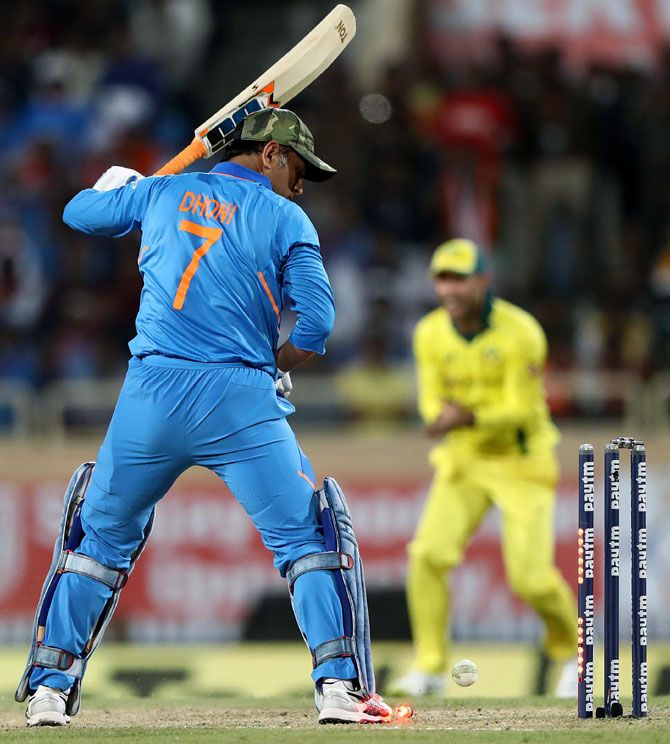 Shikhar Dhawan (1), Rohit Sharma (14) and Ambati Rayudu (2) were dismissed cheaply as India was left tottering at 27 for three before Kohli and Dhoni steadied the ship.

Dhawan's slash was grabbed by Glenn Maxwell at point off Jhye Richardson, while Cummins trapped Rohit Sharma leg before wicket and then bowled Ambati Rayudu in his next over.

As a mark of respect for the Central Reserve Police Force (CRPF) personnel who lost their lives in the Pulwama terrorist attack, the Indian team sported special Army caps during the match. The players also donated their match fee to the National Defence Fund. 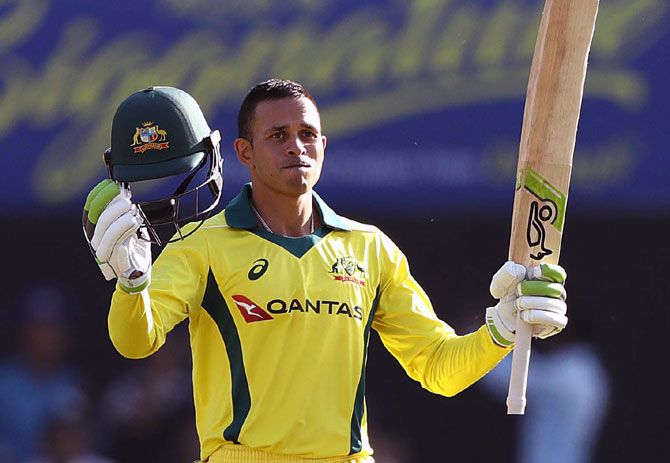 Earlier, Usman Khawaja scored his maiden century in ODIs before India staged a late comeback to restrict Australia to 313.

Khawaja hit 104, putting on 193 runs for the opening wicket with Aaron Finch, who made 93, after they were put into bat.

Glenn Maxwell, promoted to No. 3, scored a quickfire 47 from 31 balls before Australia lost their way with a few quick wickets.

Kuldeep Yadav picked up three quick wickets as India managed to pull back things in the end. Marcus Stoinis stroked 31 not out from 26 balls, while Alex Carey made 21 not out from 17 balls to score some quick runs at the end.

In the final 10 overs, Australia could score only 69 runs, despite being 244 for 2 after 40 overs, courtesy Bumrah and Shami who bowled 64 dot balls between them.

The fielding on the day was also way below par as Shikhar Dhawan, at square leg dropped Khawaja on 17, who tried a reverse sweep, off Jadeja's bowling. 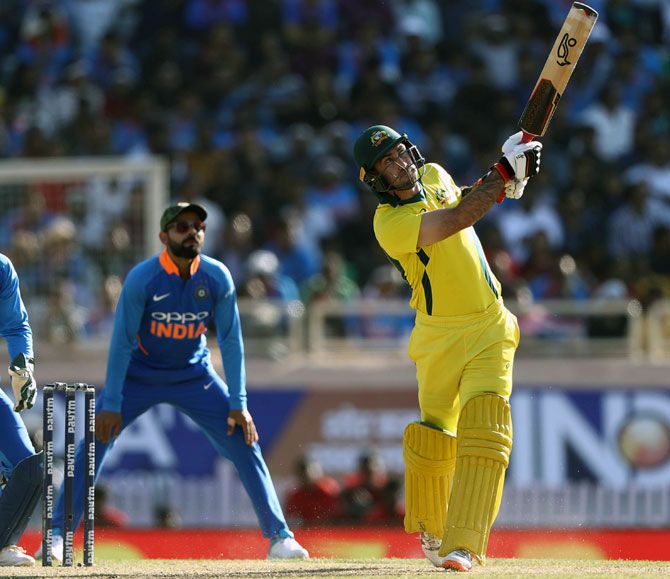 With the pitch on offer being the best in three games, the Australian openers showed positive intent from the start.

Mohammmed Shami's freak on-field injury also played its part as he had to leave the field temporarily after bowling the first three overs.

The momentum shifted from there on as both Finch and Khawaja played the Indian spinners quite brilliantly. 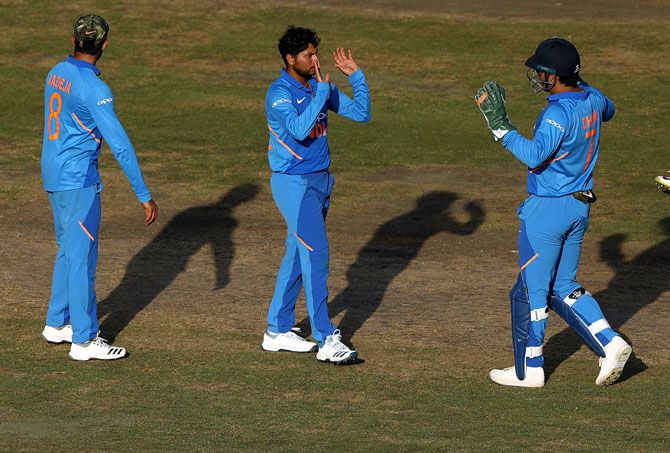 Vijay Shankar (0/44 in 8 overs) had to share bulk of the load between the fifth and sixth bowler after Kedar was mercilessly hammered by Finch, who hit all his three sixes in the arc -- between long-on and deep mid-wicket.

Jadeja as usual was ineffective on a placid track and was hit for as many as six fours and a six.

Source: PTI© Copyright 2021 PTI. All rights reserved. Republication or redistribution of PTI content, including by framing or similar means, is expressly prohibited without the prior written consent.
Related News: India, Australia, PHOTOS, Ranchi, ODI
SHARE THIS STORYCOMMENT
Print this article 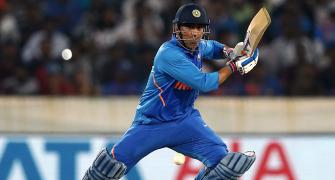 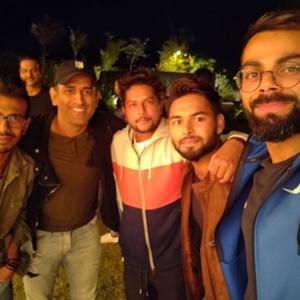 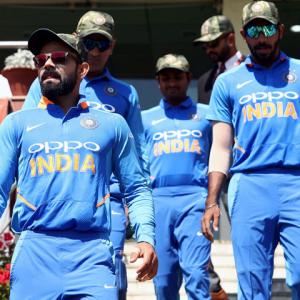