Images from Day 1 of the second Test between England and South Africa at Old Trafford in Manchester on Thursday. 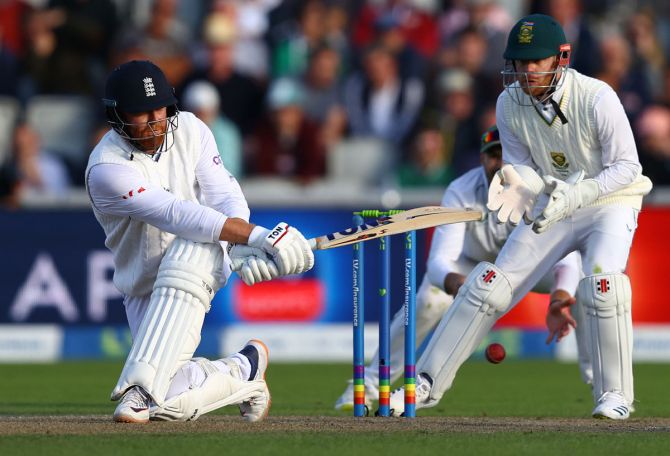 Jonny Bairstow led England to within 40 runs of South Africa's first innings total, with seven wickets in hand, on the first day of the second Test at Old Trafford on Thursday.

England were 111/3 at the close of play with Bairstow on 38 not out and opener Zak Crawley playing a crucial supporting role on 17 from 77 balls. 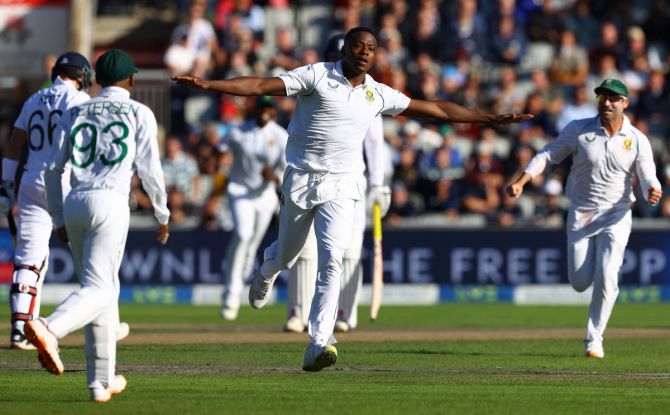 The fourth wicket partnership of 68 put England in a promising position after they had struggled early on, left at 43/3 after Joe Root was dismissed for nine.

South Africa had been bowled out for 151 after losing five wickets before lunch, with England's James Anderson and Stuart Broad picking up three wickets apiece. 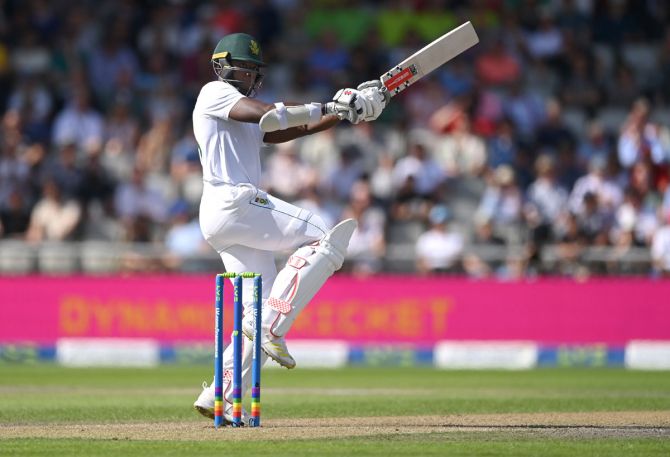 IMAGE: Kagiso Rabada, batting at No 9, top-scored for South Africa with a composed innings of 36. Photograph: Stu Forster/Getty Images

After such a low total, the tourists, who lead the three-match series 1-0, knew they needed to deliver with the ball and they enjoyed some early success when Alex Lees edged Lungi Ngidi to keeper Kyle Verreynne.

Anrich Nortje's pace was too much for Ollie Pope who was clean bowled by a delivery which nipped back off the seam.

Kagiso Rabada then claimed the prize scalp of Root, who was caught by Sarel Erwee at the fourth attempt after juggling the ball at first slip. 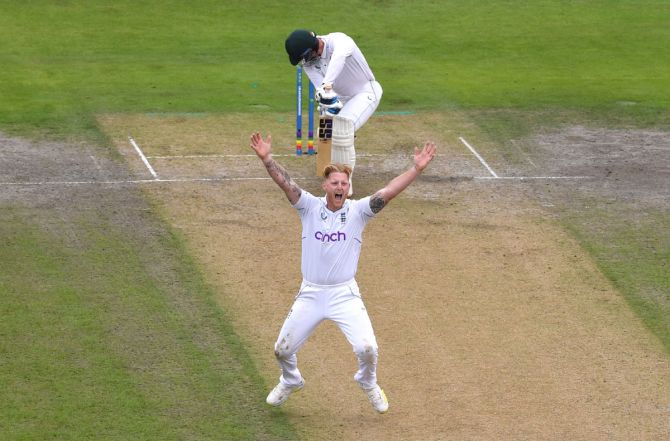 IMAGE: England captain Ben Stokes appeals for the wicket of Rassie van der Dussen, who was given out leg before wicket. Photograph: Stu Forster/Getty Images/Getty Images

The pressure was on the out-of-form Crawley but he played with focus and determination against both pace and the later spin of Keshav Maharaj.

Bairstow was more confident and willing to play his shots but for all the talk of England's new cavalier style, this was an appropriately conservative approach.

The tourists had been reeling at 108/8 before Rabada and Nortje put on 35 in their ninth wicket partnership -- the longest of the innings. 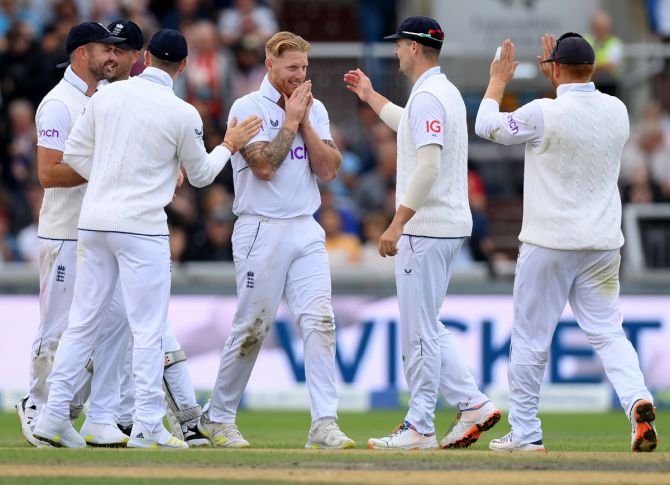 Anderson, bowling on his home ground, found some early movement off the seam and grabbed the breakthrough when he found Erwee's inside edge and wicketkeeper Ben Foakes dived to make a superb catch.

Anderson and Ollie Robinson were both beating the outside edge regularly and Robinson thought he had claimed the prize scalp of Elgar when Pope snaffled up a catch at short mid-on off the bat-pad, but the umpire signalled for a no ball.

Broad looked keen to get to work on an encouraging surface for seamers and took full advantage. 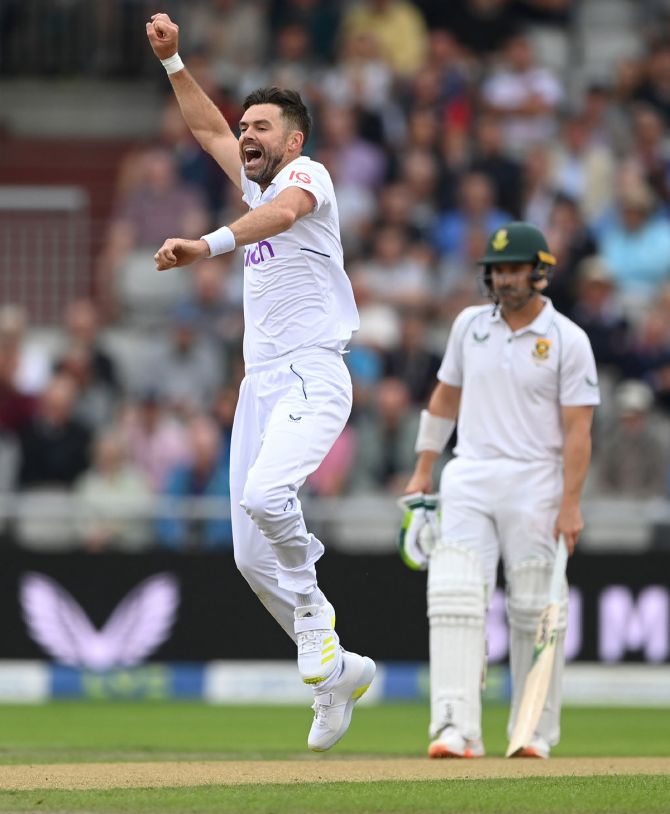 After two lbw decisions were turned down, Broad removed Elgar for 12 with a full length delivery which was edged to Jonny Bairstow at third slip.

Broad then removed Keegan Petersen for 21 in similar fashion with Root snaffling up the catch at first slip to leave South Africa on 41/3.

England skipper Ben Stokes brought himself into the attack and struck with his third delivery -- a loose short ball which Aiden Markram (14) attempted to pull but only managed to sky for a simple high catch from the grateful Foakes.

Stokes struck again just before lunch, trapping Rassie van der Dussen (16) lbw and, although the video review backed the umpire's call, the South African, who had pushed well forward, will feel he was unlucky with a tight decision. 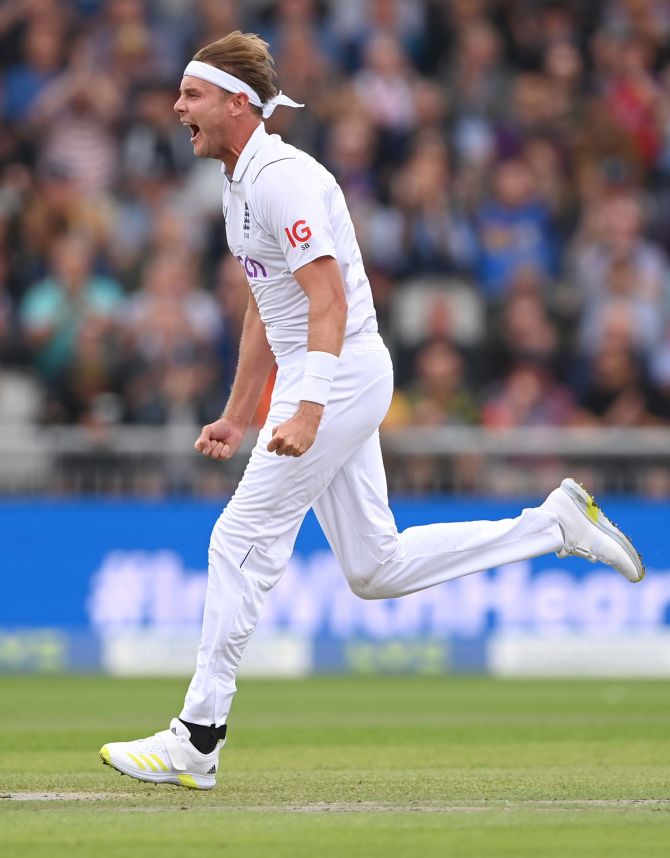 Anderson, bowling at the end of the ground named in his honour, was on a hat-trick after lunch, trapping Simon Harmer and Maharaj both leg before.

Broad also picked up his third wicket with Kyle Verreynne (21) edging to Foakes before Rabada restored some stability to the innings.

Robinson finally got some reward for his efforts, removing Nortje lbw with the first ball after tea and then Jack Leash finally got rid of Rabada for 36.

It gave England a long evening session to bat and after their shaky start they have left themselves in a strong position to build a significant first innings lead on Friday.