Images from Day 1 of the third Test between England and New Zealand at Headingley on Thursday, June 23, 2022. 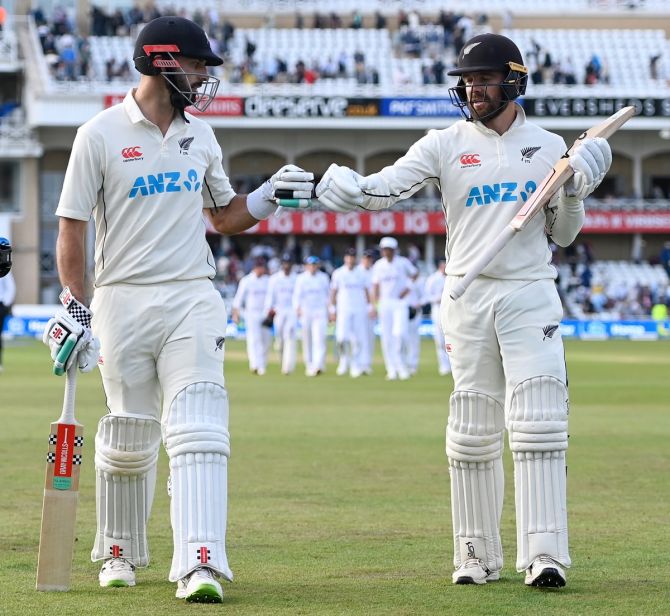 Daryl Mitchell and Tom Blundell again proved thorns in England's side as they helped New Zealand recover from a freakish stroke of misfortune to end the first day of the third and final Test on 225 for five on Thursday.

New Zealand struggled after electing to bat, with opener Tom Latham removed for a duck by Stuart Broad in the first over.

When Henry Nicholls fell in bizarre fashion just before tea, New Zealand were tottering on 123-5, but Mitchell and Blundell led the fightback with an unbroken century stand.

Nicholls, who scratched around for 19 off 99 balls, launched a drive off the bowling off left-arm spinner Jack Leach, only to see the ball strike Mitchell's bat at the non striker's end and ricochet into the hands of Alex Lees at mid-off. 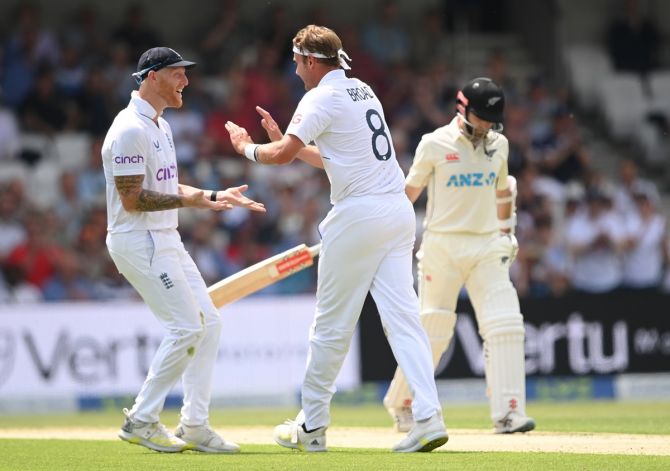 Leach could hardly believe what had happened as he celebrated his second wicket having trapped opener Will Young lbw for 20 with his first ball of the day.

New Zealand captain Kane Williamson, back after missing the second Test because of COVID-19, elected to bat first on a flattish pitch, but England seized the initiative.

Broad removed Latham with the final ball of the first over, extracting enough movement off the pitch to have the struggling opener edge to Joe Root at second slip. 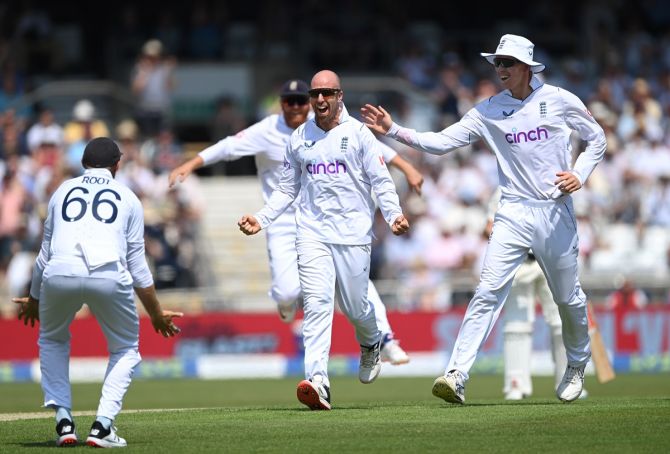 IMAGE: England bowler Jack Leach celebrates with Joe Root after he had taken the wicket of Will Young. Photograph: Stu Forster/Getty Images

New Zealand, who trail 2-0 after defeats in entertaining matches at Lord's and Trent Bridge, steadied after that setback but Young fell in the 13th over.

Williamson and Devon Conway attempted to take the game to England. Both went after Leach before lunch with Williamson striking two boundaries off the spinner in the 19th over while Conway smashed another over the bowler's head.

Broad made sure the opening session belonged to England, however, when he dismissed Williamson for 31, getting just enough movement off the pitch to find the edge for keeper Ben Foakes to take a simple catch.

It could have got better for England as the immaculate Broad found the inside edge of Conway's bat, but Foakes could not pouch what would have been a superb diving catch. 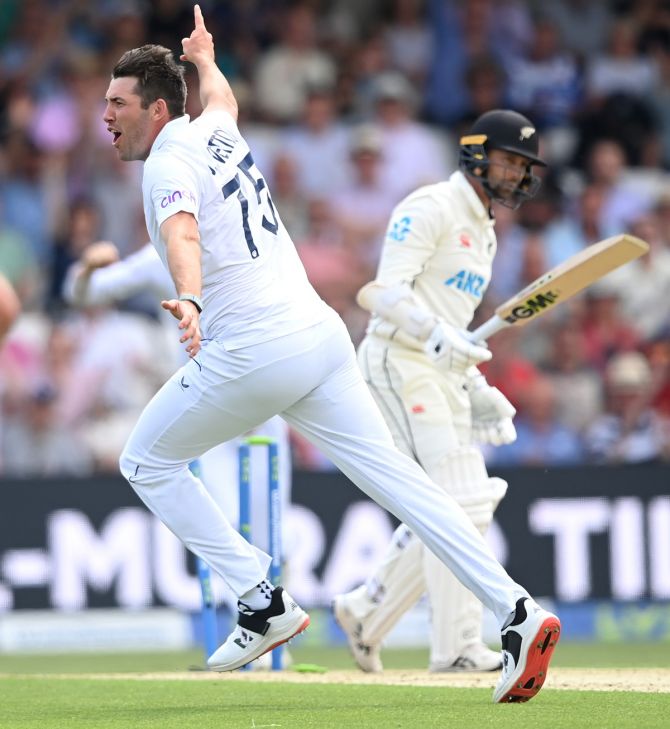 England debutant Jamie Overton produced searing pace after a nervy start and he celebrated his first Test wicket when he bowled Conway off an inside edge for 26.

When Nicholls suffered the cruellest of dismissals, England were buoyant and New Zealand's decision to bat first was beginning to look like a poor one.

Mitchell had a let-off on eight when England captain Ben Stokes opted not to review a possible lbw off the bowling of Matthew Potts -- replays showing he would have been out.

And the 31-year-old took full advantage, bringing up his half century by smashing Leach for a straight six.

England thought they had Blundell when he stretched to a loose, wide ball from Root and was given out caught behind -- only for the New Zealander to successfully review.

After a rain delay, Overton steamed in looking to break the stand, edging close to 90mph, but New Zealand avoided further mishaps with Mitchell eyeing a third century of the series.

England are seeking to win every match of a home series with at least three Tests for the first time since a 4-0 rout of India 4-0 in 2011, while New Zealand are desperate to avoid four straight Test defeats. 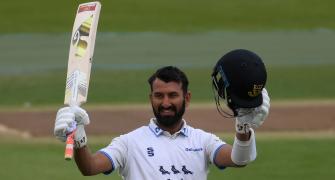 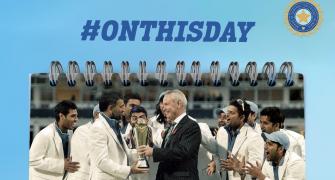 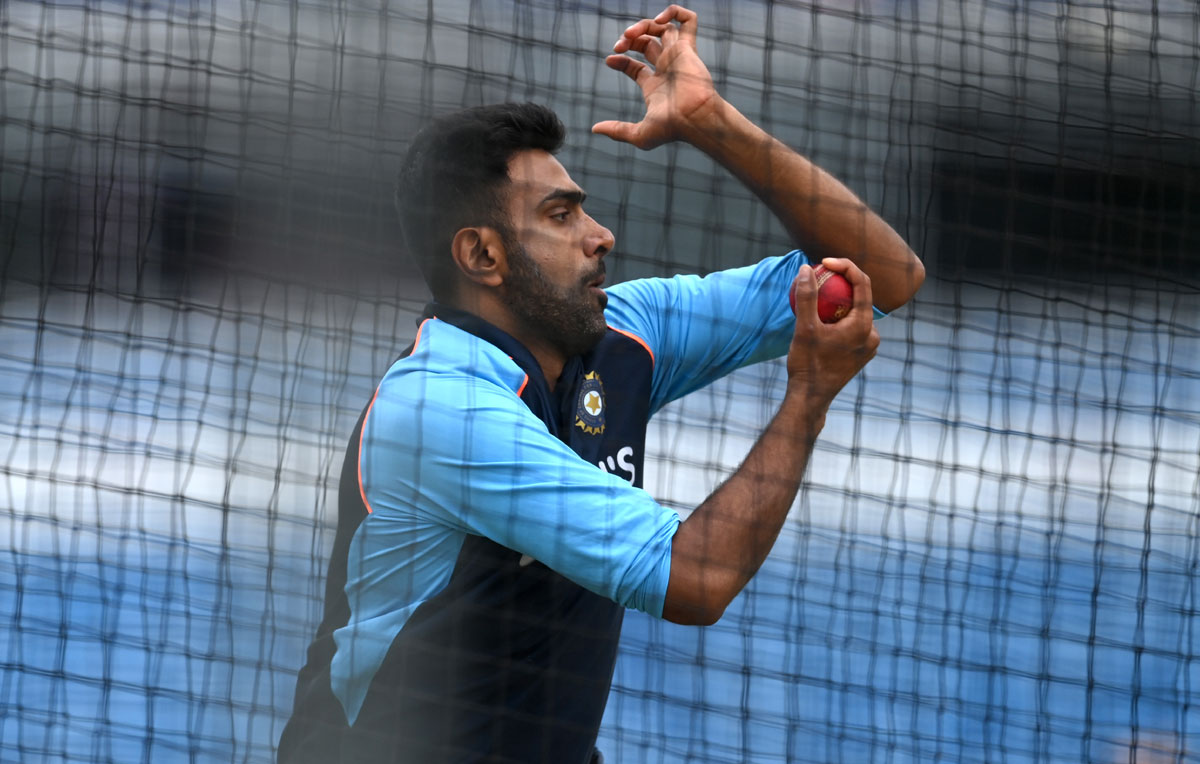 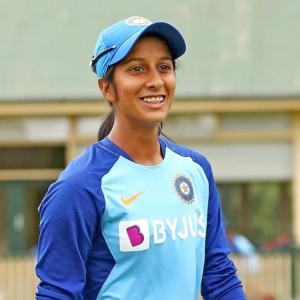 How Rohit, Pant encouraged Jemimah after being dropped