Images from the first Test between England and India, in Nottingham, on Wednesday. 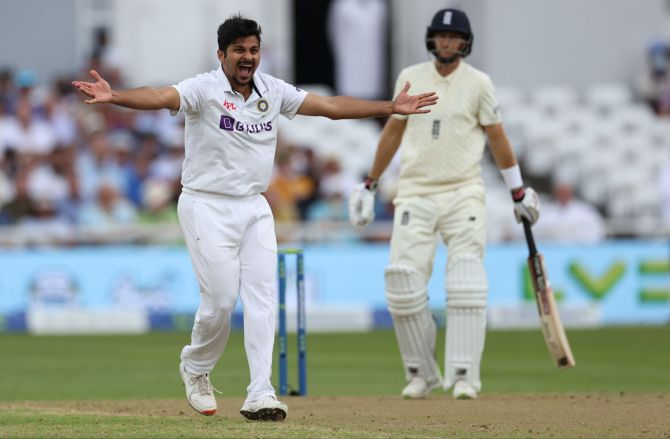 IMAGE: Shardul Thakur successfully appeals for leg before wicket against Joe Root during Day 1 of the first Test against England, at Trent Bridge in Nottingham, on Wednesday. Photograph: Eddie Keogh/Getty Images

India's pacers breathed fire in helpful conditions to dismiss England’s vulnerable batting line-up for 183 and put their team in a strong position on Day 1 of the first Test, in Nottingham, on Wednesday.

Jasprit Bumrah (4/46), who was not at his best during the World Test Championship final against New Zealand, was back in his element and ran through the opposition alongside his new ball partner Mohammad Shami (3/28).

All the pacers, including Mohammad Siraj (1/48) and Shardul Thakur (2/41), made the ball talk throughout the England innings, which lasted 65.4 overs, vindicating the team management's decision to go for a four-pronged pace attack while leaving out premier spinner Ravichandran Ashwin from the playing eleven.

Ravindra Jadeja was picked as the sole spinner in the eleven, ahead of Ashwin, raising a few eyebrows. 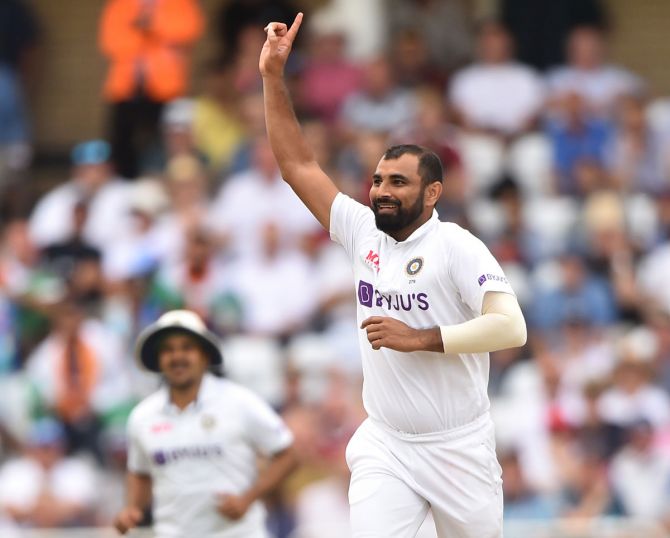 For a packed crowd at Trent Bridge, it was a treat to watch the Indian pacers display their supreme skills. Shami moved the ball both ways, Bumrah bowled his fast, swinging yorkers, Thakur flaunted his natural outswinger and Siraj used the scrambled seam to perfection. 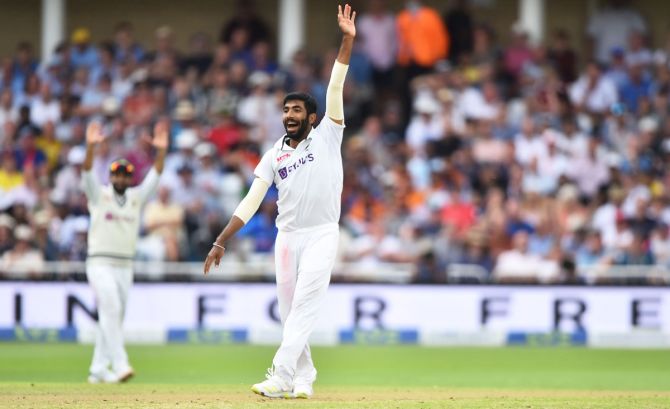 India bowled brilliantly but their job was made easier by the English batsmen, who looked under prepared for red ball cricket after coming fresh from white ball games in The Hundred.

Skipper Joe Root (64) was the only batsman who looked comfortable in the middle and Jonny Bairstow, to a certain extent, as the duo shared a 72-run stand.

England, who were 138 for four at tea, lost their last six wickets for 45 runs and if it was not for Sam Curran's unbeaten 27 towards the end, they would have struggled to cross 180. 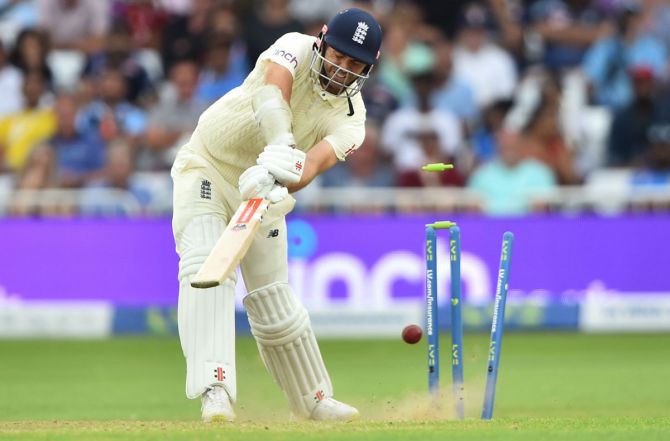 Shami, who had removed Bairtsow at the stroke of tea, struck four balls after the break by having Daniel Lawrence caught down the leg side; a soft dismissal.

Struggling to get off the mark, Jos Butter attempted a loose drive off Bumrah on his 18th ball only to edge it back to Rishabh Pant.

Thakur got the prized wicket of Root with a beautiful delivery that swung away slightly from the middle and leg stump to crash the England skipper's pads, trapping him in front.

He had Ollie Robinson caught at mid-on three balls later.

Bumrah polished off the tail like he usually does -- his fast and full away swingers from middle stump proving too good for left-handers like Stuart Broad and James Anderson. 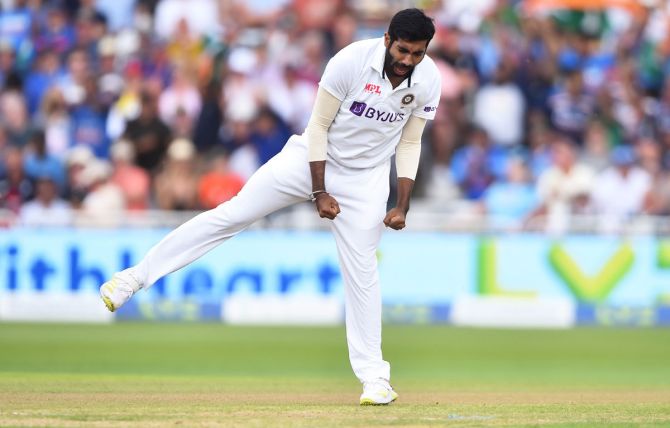 Earlier in the morning, India’s highly-rated fast bowlers were up to the task on the opening morning, reducing England to 61 for 2 by lunch.

With the sun beating down on a packed Trent Bridge, Joe Root opted to bat on a dry pitch, which had a  decent covering of grass on top.

Jasprit Bumrah, who was not at his best during the World Test Championship final, was back in his element, trapping Rory Burns in front with a sharp inswinger in the first over of the match after setting him up with three out-swingers.

Bumrah bowled his heart out in his six-over spell, beating the batsmen multiples times. Mohammaed Shami, who bowled seven overs first up, also troubled Zak Crawley (27 off 68) and Dom Sibley (18 batting off 67) on a number of occasions, but, as it often happens with him in England, the outside edge eluded him. 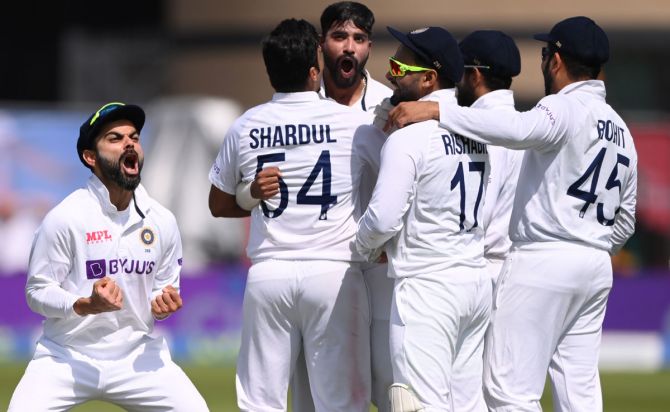 The pitch had enough for the pacers in the first hour of play with the ball swinging and seaming around.

Crawley, who averages little over 10 this year, batted well before being dismissed by Mohammad Siraj, who was picked ahead of Ishant Sharma.

After India wasted a review for a caught behind in the same over, Siraj finally induced an inside edge from Crawley's bat and this time skipper Virat Kohli reviewed it successfully. 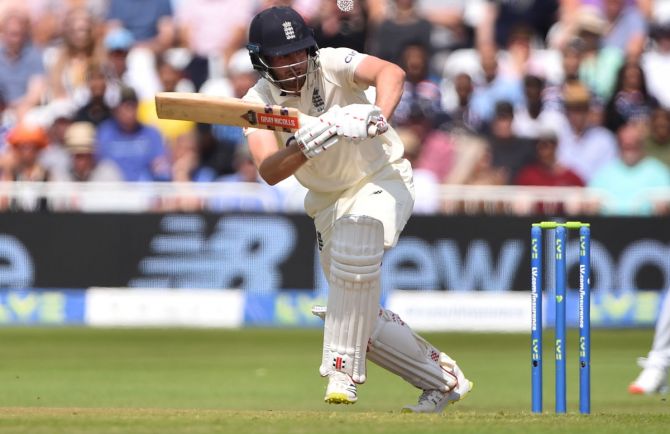 With India going in with four pacers, Shardul Thakur came into the side, but the one spinner picked was Ravindra Jadeja, who did mot bowl in the first session.

Dropping premier spinner Ravichandran Ashwin was a big call as he was well-prepared for the series opener, his preparation including a county game.

Thakur, picked for his natural ability to swing the ball besides his lower-order batting, looked in good rhythm in the five overs he bowled.

Sibley survived a close leg before shout off Bumrah at the stroke of lunch, but Kohli resisted the temptation for another review and rightly so.

Twenty-five overs were bowled in the session, with skipper Joe Root (10 off 12) batting alongside Sibley at the break. 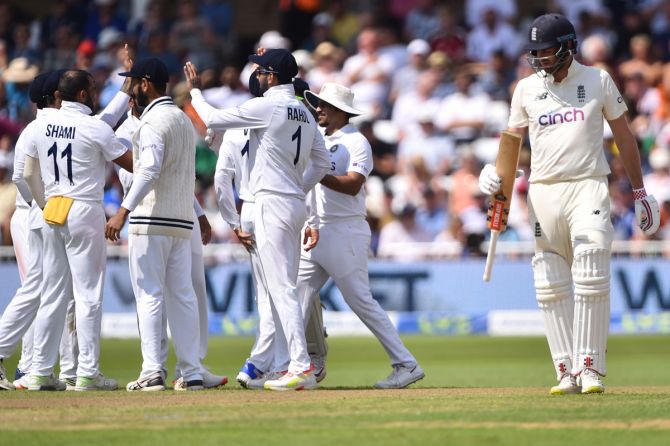 IMAGE: India's players celebrate as England's Dom Sibley walks back to the pavilion after being dismissed by Jasprit Bumrah. Photograph: Nathan Stirk/Getty Images

Joe Root and Jonny Bairstow frustrated India’s bowlers with solid Test match batting in challenging conditions before Mohammed Shami ended their 72-run stand by dismissing the latter and leave England at 138 for 4 at tea on Day 1 of the series opener, in Nottingham, on Wednesday.

Like the first session, India’s pacers beat the batsmen regularly, but Root (52 batting off 91 balls) and Bairstow (29 off 71) played with grit and patience to thwart them.

Shami was finally able to break their threatening stand by having Bairstow leg before wicket at the stroke of tea.

He got one to jag back in and India reviewed the umpire's decision successfully. 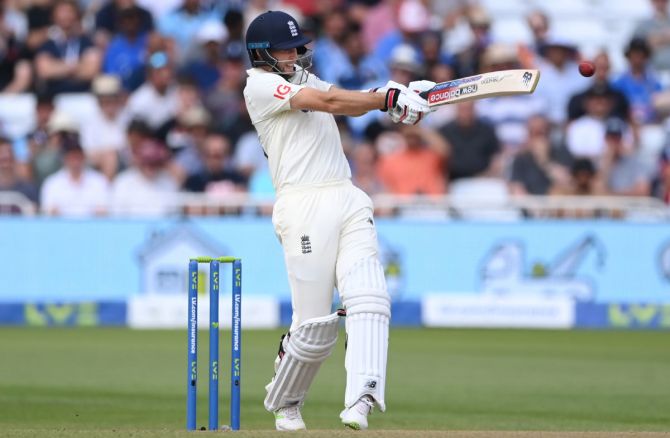 England scored 77 runs in 25.2 overs bowled in the afternoon session for the loss of two wickets.

India had their tail up early in the session when Shami had Dom Sibley caught at short mid-wicket in the third over post-lunch.

The pacer induced Sibley into a trap set for him with a fuller delivery on his pads, which the England opener flicked straight to K L Rahul, leaving the hosts reeling on 66 for 3. 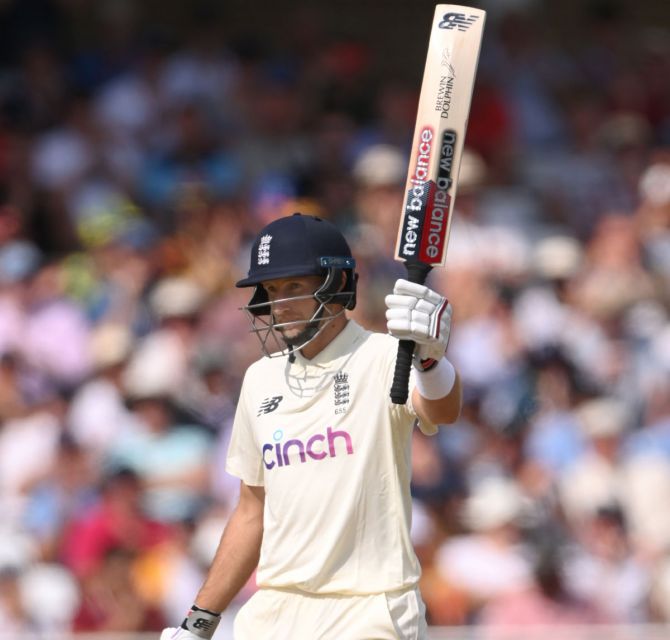 Bairstow joined Root in the middle and they ended up batting the rest of the session.

While the Indian pacers kept asking questions, with the ball constantly moving around, Root seemed to find answers more often than not. He played with soft hands and close to his body, and was quick to latch on to the loose balls.

His nine fours included a couple of delightful cover drives.

Bairstow also got into the act by driving Mohammed Siraj past extra-cover before hitting him down the ground for successive fours.

Against the run of play, India got a timely breakthrough before they went back into the dressing room.