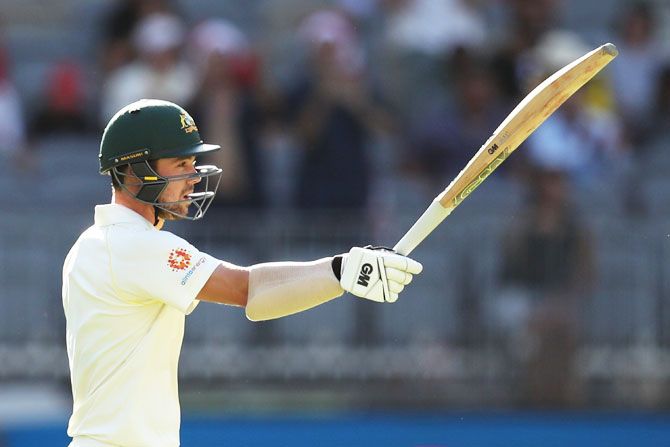 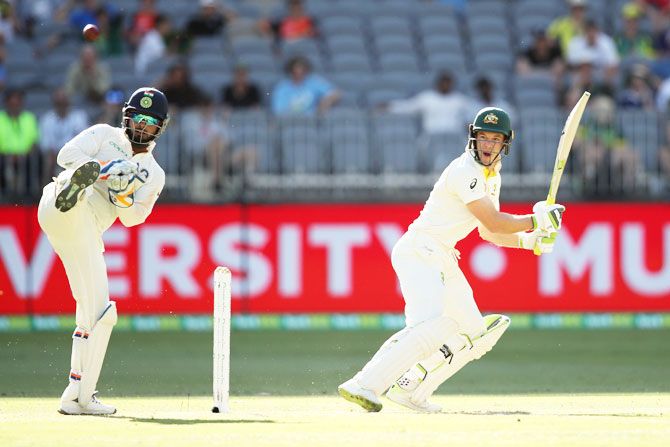 India recovered from a patchy start to reduce Australia to 277 for six on the opening day of the second Test but the hosts still walked out with advantage considering the bowler-friendly conditions, in Perth on Friday.

A 112-run opening stand between Marcus Harris (70) and Aaron Finch (50) vindicated their decision to bat on a green top before Indian bowlers made a decent recovery by taking three wickets each in the last two sessions.

With the pitch offering better assistance from the post lunch session and the Indian bowlers managing to rectify their line and length, the visitors made inroads into the Australian batting line-up.

Skipper Tim Paine (16 not out) and Pat Cummins (11 not out) were unbeaten at stumps after enduring a testing spell from Jasprit Bumrah.

Following a good start, Shaun Marsh (45) and Peter Handscomb (7) looked to extend their fourth-wicket partnership but could only manage to add three runs as Sharma broke through early in the final session.

Handscomb looked to cut away too close to his body, and Virat Kohli held a stunning one-handed catch at second slip to dismiss him in the second over after tea.

Marsh and Travis Head (58) then added 84 runs for the fifth wicket, and in doing so took 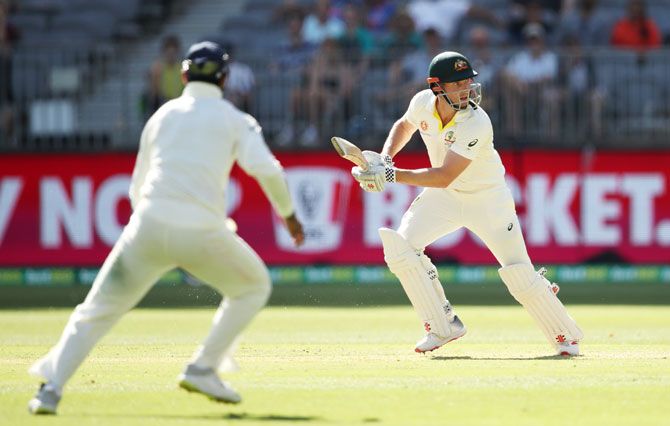 Australia went past 200 in the 69th over. India could have broken through early, but Rishabh Pant put down a regulation catch from Marsh (on 24) off Vihari in the 67th over.

Just when it looked like India were losing the plot again, Marsh fell against the run of play. He tried to cut Vihari and edged to first slip where Ajinkya Rahane made no mistake.

Head reached his third Test half-century off 70 balls but threw it all away as he square cut a wide delivery off Sharma six overs later and was caught at wide third man. 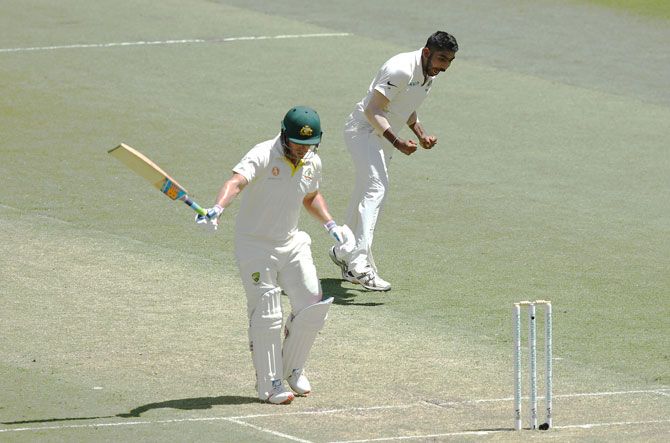 India put up a much improved effort with the ball in the afternoon session, bouncing back to reduce Australia to 145 for three at tea on Day 1 of the second Test in Perth on Friday.

At the break, Shaun Marsh (8 not out) and Peter Handscomb (4 not out) were at the crease.

Jasprit Bumrah (1-29) and Umesh Yadav (1-48) struck during a tight spell in the second hour of play after lunch, while part-time spinner Hanuma Vihari (1-10) etched out a wicket with a surprise bouncer as well, with Australia losing three wickets for 22 runs. 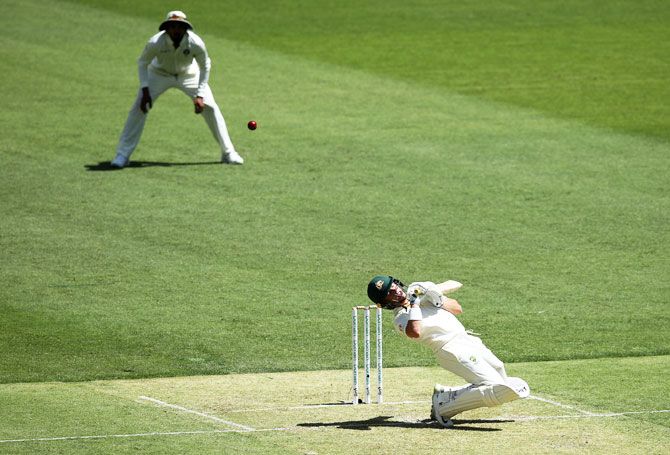 Post lunch, Marcus Harris (70) brought up his maiden Test half-century off 90 balls as he took his opening stand with Aaron Finch (50) to 112.

Their 100-stand had come up in the 34th over, with India leaking another 48 runs in the hour's play after the break. Mohammed Shami (0-37) conceded 23 runs in his four-over second-spell after lunch. 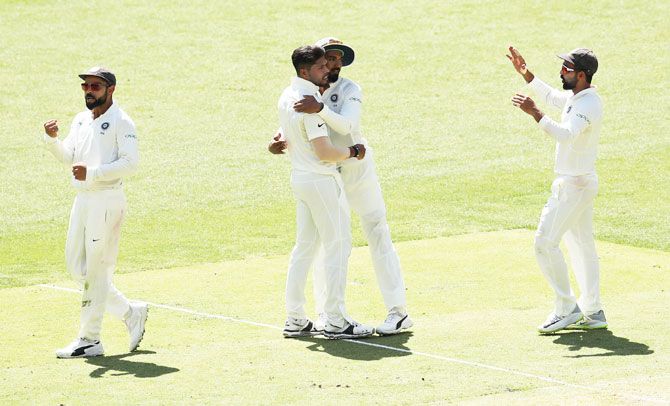 Finch too reached his second Test half-century off 103 balls as Australia reached a position of strength.

But things turned thereafter as Bumrah struck first up in the 36th over, trapping Finch lbw with a fuller delivery. 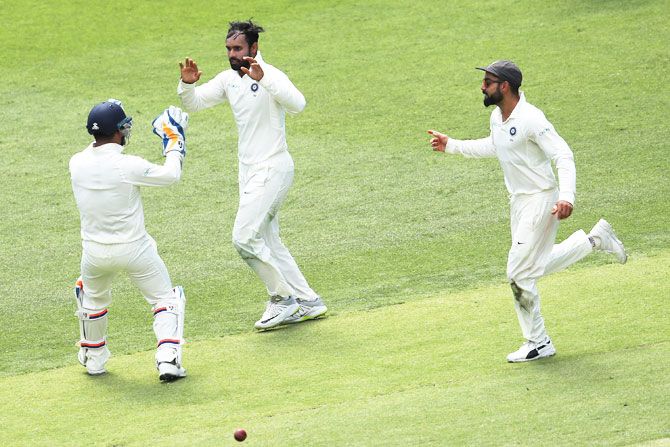 The big moment came soon after when KL Rahul dropped Harris (on 60 not out) off Shami in the 45th over, with the fielder failing to time his jump at second slip.

It didn't cost India too much though as four overs later, he hit a surprise bouncer from Vihari straight at Ajinkya Rahane at slip. He only added 10 runs against the chance given.

In between, Yadav used the pressure built and etched out Usman Khawaja's (5) wicket, out caught behind in the 46th over as India gained the fruits of their hard work in this second hour of play. 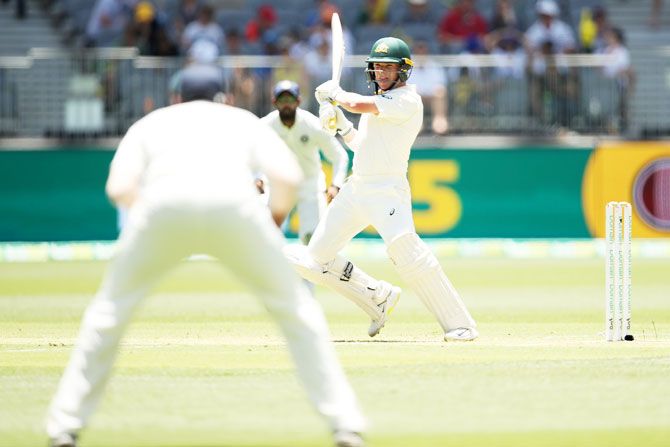 Earlier, openers Marcus Harris and Aaron Finch kept the Indian pacers at bay on a green top, taking Australia to 66 for no loss at lunch.

The hosts won the toss and opted to bat and named an unchanged eleven from the first Test. India on the other hand made two changes. Hanuma Vihari and Umesh Yadav came in for the injured Rohit Sharma and R Ashwin, as India fielded an all-pace attack for only the third time in their Test history.

The Perth wicket at the Optus Stadium was talked up a raging green-top wicket, but the Australian openers defied all that speculation. 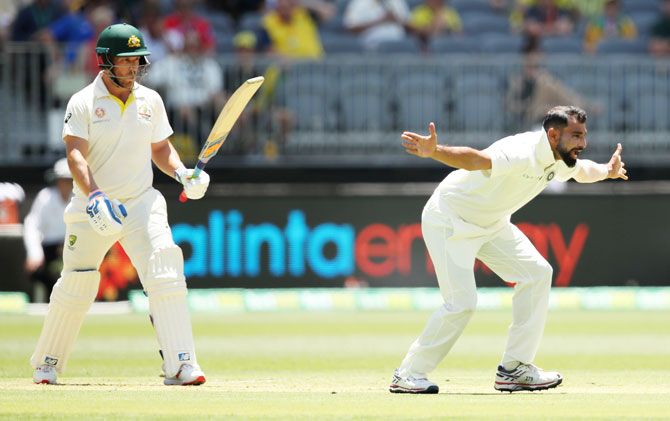 For their part, Indian pacers chipped in with all possible help and bowled a poor first spell with the new ball.

Ishant Sharma (0-16) started with a delivery down leg side as the first Test ball to be bowled at this ground. It didn't change much for his first spell of four overs as he sprayed the ball all over. He seemed to be more concerned about not bowling any no balls, than maintaining an attacking line first up.

At the other end, Jasprit Bumrah (0-26) was bowling short of length, even if he bowled quicker than Ishant. This new ball pairing proved expensive and wasteful as Umesh Yadav (0-19) came on as first change in the ninth over.

The Australian opening pair was cruising at this stage with 45 runs coming in the first 11 overs and the hosts went to drinks at 47-0 in the first hour of play.

Mohammed Shami (0-4) was India's best bowler of the first session and he bowled with immaculate control from the very beginning. He came on to bowl in the 12th over and immediately troubled the batsmen. His first spell, along with Yadav's, was key in pulling things back for India. 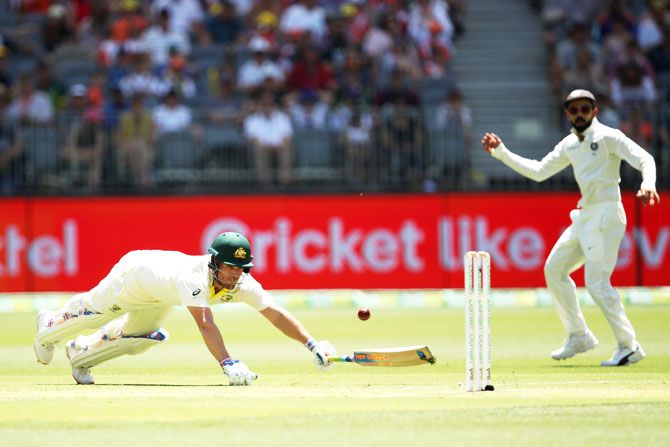 Finch survived an lbw shout on account of height as India wasted a DRS review. They had another loud shout turned down on the very next ball, but this time no review was taken.

The opening pair brought up their 50-partnership off 90 balls in the 15th over of the morning. Finch had attacked more in the first hour, but settled down to make it until lunch after Bumrah tested him in the next spell. Harris meanwhile was steady and left the ball well, without playing any false shots.

India bowled better in the second hour of play and conceded only 19 runs in 13 overs. All pacers bowled a second spell, as Ishant and Bumrah in particular improved on their initial spells.

But the damage had already been done as the Australian duo was set and the new ball had been wasted on a fresh pitch. 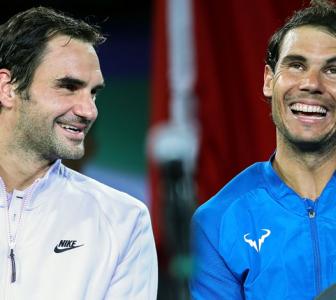 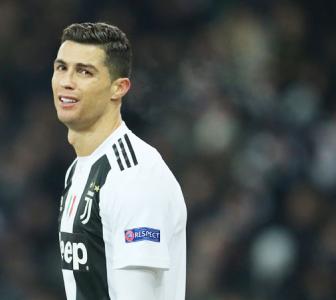 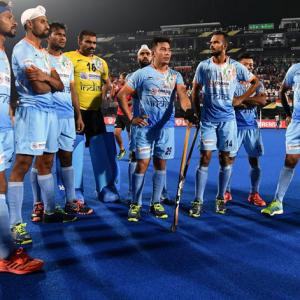 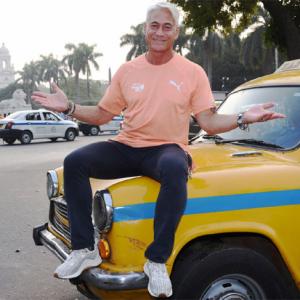